A massive fire completely destroyed a home worth $3.2 million in Hingham on Monday.

The Hingham Fire Department said in a news release that the fire reached four alarms and spread to at least four other homes.

While the 6,000-square-foot mansion was a total loss and other homes sustained damage, the department said, no injuries were reported.

While responding to the scene, firefighters said, they could see lots of smoke above the house, and decided to strike a second alarm.

By the time firefighters got to the home, it was already fully engulfed in flames, and a third alarm was immediately called, firefighters said. At 1:30 p.m., Fire Chief Steven Murphy struck a fourth alarm as the fire continued to spread.

Because the home was located on top of a hill, firefighters initially had difficulty getting adequate water to battle the fire, and had to stretch additional hose lines.

Additionally, firefighters said, high winds caused the fire to spread quickly and blew hot embers onto four other nearby homes. A home at 2 Mann St. sustained significant damage, and the family who lives there has been displaced.

Three people were inside 4 Mann St. when the fire started, but all got out safely, firefighters said.

Several homes in the area were also evacuated as a precaution due the fire’s embers spreading to nearby houses. The billowing smoke from the fire could be seen for miles.

“The windy conditions and size of the home made this a difficult fire to extinguish,” Fire Chief Murphy said in the release.

“I am glad that no one was hurt and our hearts go out to the family that lost their home. I’d like to thank our mutual aid partners from neighboring departments who helped us extinguish the fire and prevent further property damage to other homes in the area.”

Fire Chief Murphy is also asking residents to water down mulch beds on their properties if they live in the area of the fire. 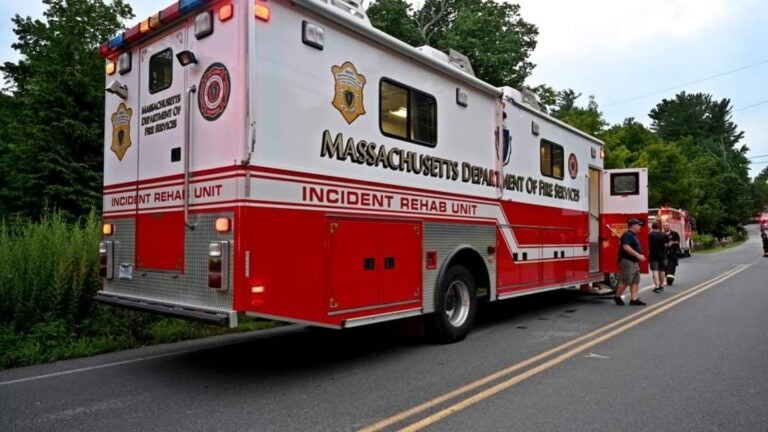