There’s no denying the South Natick dam is picturesque.

Surrounded by quaint cobblestone and trees that turn lovely shades of red, orange, and yellow in the fall, it’s no wonder it’s ranked the number five attraction on Trip Advisor’s “Things to do in Natick” list.

But as the nearly 90-year-old dam has aged and degraded, it’s become a safety hazard to the surrounding homes and properties.

Additionally, environmentalists say the dam is detrimental to the health of the river, and local indigenous people, to whom the river is sacred, say they never wanted the dam to begin with.

Still, some residents fear that removing the dam could destroy the lovely scenery and recreation the dam currently provides.

The Town of Natick is now faced with a choice — do they repair the dam, or remove it?

How it all started

The current dam was originally built in 1934 to create a swimming hole, beautify the area, and create work during the Great Depression. It was never used to generate power or prevent flooding.

In 2017, after inspection, it was discovered that the dam had a number of structural issues that required renovation. These issues include trees that are planted in the earthen part of the dam, which is no longer allowed by the state, erosion, leakage, and deteriorated concrete.

If the dam were to fail and cause a flood, according to Town documents, it could result in significant property damage and possible loss of life.

In 2019, according to the Town of Natick, the town had a dam engineering consultant provide a plan for how to rehabilitate the dam. But during public meetings, residents raised concerns about the requirement that trees on the dam’s right embankment be removed if the dam were to be repaired.

As a result, attendees asked the Town to consider alternative solutions that would preserve the area’s aesthetics and recreational function but reduce public safety risk, including removing the dam.

The Town then created the Charles River Dam Advisory Committee to learn more about the options for the dam and seek public input on what to do next.

The committee will conclude its months-long investigation next week and begin deliberating what course of action to recommend to the Town.

The case for repairing the dam

On the website for the campaign to save the Natick dam, the structure is described as “a spectacular jewel.”

“On any warm day people flock from miles around to come to the site to recharge with the sight and sound of the Charles River flowing over our dam. Picnics are eaten, children play, and neighbors fish. It has become an important part of our heritage,” the website reads.

The dam is historic, and is listed as part of the historic district in South Natick. It is believed that some kind of dam structure has intermittently been at that location since the 1720s.

While there is some debate as to what the space would look like after dam removal, the large pond that currently sits there would no longer exist.

The Save Natick Dam campaign also believes that there would be no tranquil sounds of running water or serene mist.

“The result will most probably look like the Charles River immediately beneath the dam. Shallow and rocky,” the website reads.

“The Charles River is not a large river. The water does not flow fast and it is not deep. During the summer, the water level lowers and it often becomes a muddy creek.”

According to documents from the town, dam removal is expected to result in a dramatic water level drop of three to five feet. The river’s width would also drop substantially.

A quarter mile section near the current dam is expected to drop to half a foot to a foot of water on average. For some months of the year, canoeing or kayaking in the river would be difficult or impossible.

“It is part of my everyday life throughout the winter and summer, and for there not to be a body of water to kayak in during the summer would be devastating,” Natick resident Steve Dannin told NBC 10 Boston. “Not only for me and my family and our neighbors, but the whole town.”

Save Natick Dam campaign leader Brad Peterson said over email that the shallow river and potential loss of the pond are his biggest concern with removing the dam.

“The sound of water flowing over the spillway, and the water behind the dam is the reason our spot in Natick is so beautiful, it’s the reason our dam and park is a destination,” Peterson said over email.

The Town of Natick is considering adding park amenities if the dam is removed, but it’s unclear how much these amenities would cost or how likely the Town is to go through with the plan.

As for environmental concerns, Peterson noted that all the arguments stem from aggregate findings about dams, and that no studies have been done on how their specific dam affects the local ecosystem.

“At a minimum, I think we should do the appropriate studies to understand that better,” Peterson said over email.

The case for removing the dam

This is the second lowest rating it could have received. The 2021 evaluation estimates that repairing the dam would cost the Town $1.8 to $2.2 million.

Robert Kearns, the climate resilience specialist at the Charles River Watershed Association (CRWA), which supports dam removal, said that at town meetings, dam removal was estimated to amount to about half the cost of repairing it.

He added that if the town keeps the dam, they will keep having to pay for inspections and repairs in the future.

“With budget concerns, it’s really the fiscally responsible thing to do,” he said.

Kearns also said there is a lot of federal grant money currently available for dam removal, and that an application for removing the Natick dam would be competitive because it would be beneficial for the fish in the river.

The impact on the environment is CRWA’s biggest reason for supporting dam removal.

“[Dams are] bad for the health of the river. They’re bad for fish passage, and especially with climate change, they can cause safety hazards,” CRWA Executive Director Emily Norton said.

Norton said that because dams slow the river, they cause the temperature of the water to rise, which is bad for fish and other fauna that evolved over thousands of years in streams of a lower temperature.

Dams also reduce the amount of oxygen in the water, which is bad for fish, increases the likelihood that the river develops invasive plant species, and prevents fish from traveling along the river naturally, Norton said.

While the Natick dam does have a fish ladder, Kearns said, it was created for Atlantic salmon, which no longer populate the river. The ladder is not effective for other fish species’ travel.

Kearns said dams also cause sediment buildup in the pond area, which not only interferes with the natural stone habitat at the bottoms of the river, but deprives habitats downstream that are meant to be sediment rich.

The return of fish to the river as a result of removing the dam would also be beneficial for those who fish in the river for recreation.

But dams don’t just make the river less hospitable to fish and other species that call the river their home, but also to humans and pets, Norton said.

Dams increase the likelihood that the river will develop cyanobacteria, also known as blue-green algae, because the algae grows better in slow moving, warmer water.

Blue-green algae kills dogs across the country every year during the warmer months when dogs play in the water and lick their fur, ingesting the algae.

“When there’s a bloom, it’s a red flag, and you really should not even go out in a boat to be even breathing it in. That’s how toxic it is,” Norton said.

Given the environmental concerns, Mass Audubon, Massachusetts Rivers Alliance, Sierra Club Massachusetts Chapter, and the Trout Unlimited Greater Boston chapter have all sent letters to the Town in support of removing the dam.

Environmentalists and locals have also expressed concern about the trees that would have to be removed if the dam was repaired. The Town estimates that it would have to cut down 60 trees, which would have both an environmental and aesthetic impact on the area.

“I’m very sympathetic to community members who are very attached to the aesthetics of the dam,” Norton said. “…With those dozens of trees taken down, it’s not going to be pretty. So what’s there now, no matter what decision they go with, it’s not going to continue to look like that.”

Kearns believes concerns that the river will turn into a mud pit are unfounded. He said that within a year or so, the natural flora of the area will start to return and fill in the space that was previously taken up by water. He also said the Town could be proactive by planting in that area.

“The best thing to do is just open up the river,” Kearns said.

Many Natick residents are also sympathetic to the wishes of the local indigenous people.

GBH reported that Kristen Wyman, who is Nipmuc and sits on the dam advisory committee, traced indigenous opposition to the dam back centuries to the original damming of the Quinobequin — the name Indigenous people use for the river — during a presentation to the Town.

“There’s a little bit of pain and frustration that somehow the environment and the needs of the river still aren’t being prioritized,” Wyman said. “It was put there to maintain a booming settler population at the expense of the Native people and the food sources that we relied on.”

Public comment on the dam ends on July 19. After that, the Dam Advisory Committee will begin deliberating. They are supposed to deliver a recommendation to the Natick Select Board by August.

But regardless of what happens next, Kearns said, it will be a few years of gathering funding and planning construction before there are any changes to the dam. 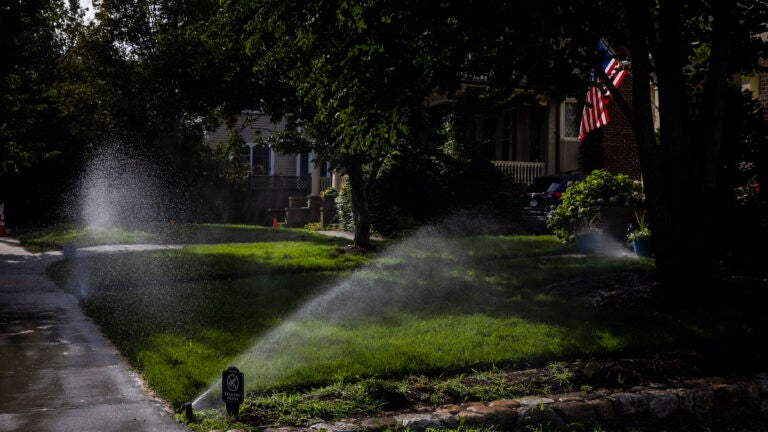 Here’s what you need to know about Mass. water restrictions