On Saturday, members of the neo-Nazi group NSC-131 gathered outside a Jamaica Plain community center to voice their opposition to a children’s drag queen story hour event. The group’s leader, Christopher R. Hood Jr., 23, of Pepperell, was arrested and charged with affray.

Two counter-protesters were also arrested Saturday, The Boston Globe reported. One got into a fight with Hood, and another allegedly refused to get out of the way of NSC-131 members as they left the area, punching a window of a car driven by a member.

The criminal charges against the two counter-protesters were dropped by Suffolk prosecutors Monday, while Hood’s criminal prosecution remained in place, according to the Globe.

Hood appeared in West Roxbury Municipal Court, where he pleaded not guilty. He was released on personal recognizance, but Judge Kathleen Coffey warned Hood against future arrests. Hood has two prior arrests in Boston, both of which were dismissed.

“I hope you hear me, Mr. Hood: No new criminal charges,” Coffey said from the bench, according to the Globe.

The Nationalist Social Club 131, or NSC 131, is classified as a neo-Nazi group by the Anti-Defamation League. It was established in eastern Massachusetts in 2019, and appears to be based in New England, despite various claims of membership from around the country. The group, led by Hood, aims to form a network of white men who are dedicated to fighting perceived enemies in a so-called war being waged against them by “a hostile, Jewish-controlled system,” according to the ADL.

The demonstrators that appeared Saturday wore clothing with the NSC logo, chanted “NSC 131,” and displayed a banner that read  “PEDO SCUM OFF OUR STREETS,” the Globe reported.

Supporters of the counter-protesters gathered outside the courthouse Monday, demanding that charges be dropped against them.

Suffolk District Attorney Kevin R. Hayden’s office recommended that all charges be dropped against the counter-protesters.

“Our actions in these cases are consistent with our approach to other individuals with no or minor records who are charged with similar low-level offenses,’’ a spokesman from Hayden’s office told the Globe.

One man who came to the courthouse Monday in support of the counter-protesters was also arrested for allegedly striking Boston Police Captain John Hughes. Court records identified him as Roderick Webber of Brighton, according to the Globe.

A video posted to Twitter by a WCVB reporter appeared to show NSC 131 members stomping on Webber as they entered the courthouse. In the background, a crowd can be heard chanting “Nazis out.”

Another video posted to Webber’s Twitter account showed more footage of the interaction. The video showed Webber getting knocked over by NSC 131 members and then following them up the courthouse steps to tell police he had been assaulted.

Webber later pleaded not guilty and was released on personal recognizance, according to the Globe.

Earlier in July, about 100 members of the white supremacist group Patriot Front marched through downtown Boston. Some of the extremists allegedly assaulted a Black activist during their demonstrations.

“It’s no coincidence that these cowardly groups from outside our city continue to target Boston as we showcase how representative leadership, empowered communities, and bold policies can have immediate impact,” Boston Mayor Michelle Wu said in a statement after the incident on Saturday.

On Sunday, U.S. Attorney Rachael Rollins said that her office was in the process of launching a hotline for people to report white supremacist actions.

“We need to expose these cowards,” Rollins said in a statement.

Rollins also said that she is ready to use federal resources to assist local authorities in dealing with these groups.

An ADL report found that Massachusetts was one of the states with the highest amount of reports of white supremacist propaganda in 2021. 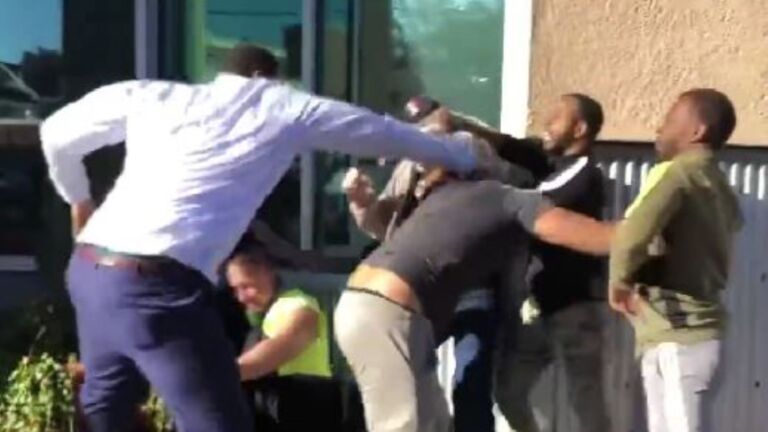