Just when you thought the images of a whale breaching on top of a boat off of Plymouth couldn’t get any more dramatic, new footage has surfaced showing what the giant mammal looked like from on board the boat.

“We all felt bad for the whale, wrong place at the wrong time for all of us,” the boater wrote online, according to WCVB. “We all got bumped around, but went on to live another day.”

Initial video taken by a nearby boater, which showed the humpback whale landing on a boat off Manomet Point in Plymouth Sunday, immediately went viral, spurring national headlines. But the new footage provides a much closer look at the creature as its massive body slammed down on the bow of the small vessel.

No injuries were reported, but the boat did suffer noticeable damage.

As a result of this incident, the Massachusetts Environmental Police issued a statement Sunday on behalf of several marine organizations advising boaters “to use extreme caution near Plymouth, Massachusetts, where an aggregation of three juvenile humpback whales have been feeding for at least a week.”

“These young whales are engaged in physically active feeding behavior that is very unpredictable while feeding in a shallow area on menhaden (or ‘pogies’), a rich and highly abundant schooling forage fish that also attracts striped bass. This creates a safety hazard for both whales and humans,” they continued.

In a Facebook post, the Center for Coastal Studies advised boaters to “maintain distances of 100 feet or more to ensure both whale and human safety.” They announced that they would be working with the Plymouth nonprofit Whale and Dolphin Conservation to identify the individual whale involved in the collision to “monitor any potential impacts.”

The environmental police said they were investigating the incident. 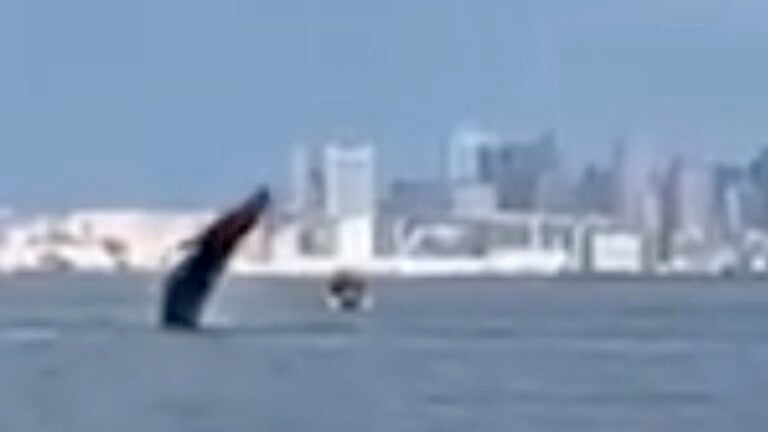