AUSTIN, Texas — When viral lies harm private people, are the courts their best refuge? A trial to decide how much conspiracy broadcaster Alex Jones must pay a Sandy Hook family for defaming them attempts to answer that question.

Neil Heslin and Scarlett Lewis, the parents of Jesse Lewis, 6, who died at Sandy Hook Elementary School in Newtown, Connecticut, are requesting $150 million in compensatory damages for years of torment and threats they endured in the aftermath of Jones’ lies about them on Infowars, his Austin, Texas-based website and broadcast. They are suing him in the first of three trials in which juries will decide how much he must pay relatives of 10 people killed in the Dec. 14, 2012, mass shooting at Sandy Hook for spreading lies that they were actors in a “false flag” operation, planned by the government as a pretext for gun control.

Last year Jones lost a series of Sandy Hook defamation cases by default, setting the stage for the damages trials.

More important than money, the parents said, is society’s verdict on a culture in which viral misinformation damages lives and destroys reputations, yet those who spread it are seldom held accountable. “Speech is free, but lies you have to pay for,” Mark Bankston, the parents’ lawyer, told the jury in his opening statement last week. “This is a case about creating change.”

But the trial demonstrates how difficult it is to counter the views of die-hard conspiracy theorists. Over nearly three days of testimony last week, Daria Karpova, Infowars’ corporate representative, advanced bogus claims, refusing even to rule out the possibility that the trial itself was a staged event. She cast Jones as the victim, worrying over his health and saying the Sandy Hook lawsuits have cost him “millions.”

That claim allowed the families’ lawyers to share records with the jury showing that Infowars reaped revenues of more than $50 million annually in recent years.

At the heart of the trial is a June 2017 episode of NBC’s “Sunday Night with Megyn Kelly,” in which Kelly profiled Jones. In the broadcast Heslin protested Jones’ denial of the shooting. He recalled his last moments with Jesse, saying, “I held my son with a bullet hole through his head.”

Afterward, Jones and Owen Shroyer, a lieutenant of Jones at Infowars, aired shows implying that Heslin had lied. “Will there be a clarification from Heslin or Megyn Kelly?” Shroyer said on Infowars. “I wouldn’t hold your breath.”

Lawyers say the three trials hold lessons for other cases against conspiracy-minded defendants, from the Jan. 6 insurrectionists to Trump allies sued for falsely claiming that voting machine manufacturers helped “steal” the 2020 presidential election. Jones is also under scrutiny for his role in events surrounding the Jan. 6, 2021, attack on the Capitol.

“These Sandy Hook parents have spent years of their lives and sacrificed whatever is left of their privacy to shine a light on peddlers of disinformation, not only to seek justice for their children, but to make folks who profit from tragedy consider the consequences of their actions,” said Karen Burgess, a trial lawyer at Burgess Law in Austin who represented Dominion Voting Systems when it was sued by Texas conspiracy theorists who said the company helped rig the 2020 vote. Facing sanctions from the court, the conspiracy theorists dropped their suit against the company.

Lawyers for the Sandy Hook families say a verdict, expected this week in the first trial, could send a signal to other conspiracy purveyors about the cost of online lies and set into motion a chain of events that could shut Infowars down.

Still, the path forward is not clear. On Friday Jones put Infowars’ parent company, Free Speech Systems, into Chapter 11 bankruptcy, which usually automatically halts all pending litigation. Free Speech Systems, however, requested that the bankruptcy court lift that automatic stay, so the trial in progress can continue to a verdict. That motion is set for a hearing Monday morning in a bankruptcy court in Victoria, Texas. Judge Maya Guerra Gamble of the Travis County District Court indicated that the trial would proceed.

Lawyers for the families say a big jury award this week along with the bankruptcy could threaten Infowars’ operations, but many details about Jones’ current finances are murky.

For now the filing puts on hold the remaining two Sandy Hook damages trials, both scheduled for September.

In court last week, Jones’ lawyers launched a defense advanced by other defendants in politically charged defamation cases: Our national discourse has become so polluted by disinformation, they said, that who really knows what is true or false?

But Infowars staff members testified that they did not check easily available facts about Sandy Hook — or much else — before broadcasting their incendiary assertions. Lawyers for Heslin and Lewis, using internal emails and testimony from Infowars staffers, showed how Jones and his top lieutenants ignored multiple warnings that continuing to broadcast Sandy Hook lies would harm the survivors and land Infowars in legal trouble.

In a videotaped deposition, a former employee, Rob Jacobson, said he repeatedly delivered these warnings to Infowars staff members, “only to be received with laughter and jokes.”

The NBC episode, which was shown in court, was particularly striking. In it Jones made a variety of damaging false claims, including dismissing a 2017 suicide bombing that killed 22 adults and children at an Ariana Grande concert in Manchester, England, as an attack on “a bunch of liberal trendies,” who support “Islamist” immigration.

Shroyer also testified that he failed to fact-check a false report on the episode defaming Heslin because he did not have the time.

At the trial last week, Jones’ seat at the defense table often remained empty. His lawyer, Reynal, has declined to say whether he will testify, adding that Jones is in charge of his defense. Reynal told the judge that Jones’ absences were because of a “medical condition” that Jones, speaking outside the courthouse, described as an untreated hernia.

But he continues to broadcast his show, where he and Shroyer derided the trial last week, violating the judge’s order not to comment on it. When Jones did come to court, he drove up in a motorcade and sat in the courtroom surrounded by bodyguards. Last week Reynal thrust a raised middle finger into the face of the families’ lawyer in a dispute over exhibits that nearly ended in a fistfight.

The trial proceedings have taken a toll on Heslin and Lewis. They hired security after they spotted people waiting for them outside their hotel, and they have heard Infowars loyalists describe them as pawns in Jones’ pursuit of online clout.

During his testimony in court Thursday, Shroyer suggested that it was the lawsuits, not his and Jones’ lies, that exacerbated the families’ suffering. “I’m very upset that this continues,” he said, citing its “tremendous negative effects on my career and livelihood.” 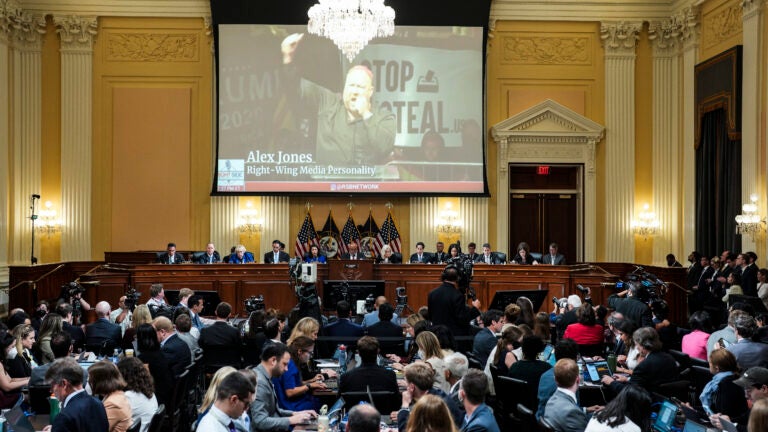