Five years ago, Mya and Deanna Cook, Boston-area high school students, made national headlines after their school punished them for wearing braided hair extensions. The twin girls, who are Black, fought back – gaining the attention of the ACLU of Massachusetts, the NAACP and lawmakers from across the country, who said the school policy banning hair extensions, and the punishments doled out, were racially discriminatory.

This week, the Cooks, now college seniors, stood beside Massachusetts Gov. Charlie Baker, R, as he signed the state’s version of the CROWN Act, which bans discrimination against natural hairstyles. The new law, which passed unanimously in both chambers of the statehouse, makes Massachusetts the 18th state to protect Black people from being punished for the way they wear their hair.

It was a full circle moment for the twins, now 21, who are entering their senior year of college.

The first CROWN Act, which stands for “Create a Respectful and Open World for Natural Hair,” was passed in California in 2019. Since then, bills protecting natural hair styles, such as Afros, braids, locks twists and Bantu knots, have spread across the country. The U.S. House of Representatives passed its version earlier this year. (The Senate has not yet taken up the bill.)

Rep. Ayanna Pressley, D-Mass., one of the authors of the House’s CROWN Act, said during floor debate in March that passage of the bill was a “bold step” toward “affirming the right for all of us to show up in the world as our full and authentic selves.”

Some conservative lawmakers, however, have mocked this kind of legislation. Rep. Lauren Boebert, R-Colo., referred to it as “the bad hair bill,” while others, like Rep. Jim Jordan, R-Ohio, said the bill is a distraction from issues “the American people care about.”

To this, Rep. Al Green, D-Tex., responded: “When you say the American people don’t want it, you cannot exclude Black people. … This is a kitchen table issue in Black households.”

“Because when Johnny comes home and he’s been fired because of his hair, that’s a kitchen table issue. That’s unemployment,” Green added.

For Mya and Deanna Cook, the rule imposed by Mystic Valley Regional Charter School in Malden, Mass., was disruptive and humiliating. “It was a cold awakening to how no one is safe from [racial] discrimination,” said Deanna Cook, who studies anthropology and business at the University of Massachusetts Amherst.

The rule mandated that students not wear “drastic or unnatural hair colors or styles such as shaved lines or shaved sides or have a hairstyle that could be distracting to other students (extra-long hair or more than two inches in thickness or height is not allowed),” according to NBC News. It also explicitly forbade hair extensions.

The Cooks, who were 15 at the time, told the Unladylike podcast last year that they were inspired to try braided extensions after their friends encouraged them to. For years, they had chemically straightened their hair. During spring break of their sophomore year, they decided to change it up, they said.

Their friends and some of their teachers complimented them on their new look when they returned to school, said the twins, but one teacher pulled them aside, saying their hair violated the school’s policy. After the twins refused to change their hair, they said they received around 40 hours of detention and were barred by school administrators from attending prom or participating on the school’s track team.

At the time, the school argued that the dress code, which also bans makeup and nail polish, was intended to make students less conscious of wealth disparities.

Even as the Cooks garnered support from other students and members of their community, they said they felt ostracized and targeted by school staff. “What really sticks out to me is how they really tried to demonize our hair at such a young age,” said Mya Cook, who called the enforcement of the rule blatantly racist.

“I was shocked that the adults in my life were doing that to me at the time,” Deanna Cook said. “I was a child … and they were okay embarrassing us every day. They were okay bullying us. They were okay putting us on the spot and making us look bad, making an example out of us.”

Mystic Valley Regional Charter School did not respond to a request for comment.

Their case caught the attention of the state’s chapter of the American Civil Liberties Union, which filed a discrimination complaint with the state’s Education Department. The Massachusetts attorney general’s office also instructed the school to immediately stop enforcing the policy.

Even though there are federal and constitutional protections against racial discrimination, bills like the CROWN Act are important because this kind of discrimination is so rampant, said Carol Rose, executive director of the Massachusetts ACLU.

Many school and workplace policies restricting natural hairstyles are presented as race-neutral, even as they disproportionately impact Black people, Rose said.

This is because these rules are based on white, Christian and Western norms when it comes to appearance, she said. For example, banning hair that is more than two inches in thickness and height “disproportionately affects students of color whose hair is coarser, thicker [and] doesn’t lie flat compared to white students.”

Rose added that by specifically calling out hair discrimination, the CROWN Act “sends a message to employers, to school officials, to national leaders that policies that are on their face ‘neutral’ but actually are discriminating based on hair and race are expressly forbidden.”

Research has shown that Black school girls are more likely to have the way they dress and present themselves scrutinized and punished. A 2019 report from the National Women’s Law Center found that, among 29 D.C. schools, majority-Black high schools had more dress code restrictions on average than other schools. Even policies written as being gender-neutral focused mainly on clothes typically worn by girls, according to the report.

Rose noted that in Massachusetts, Black girls are more than four times more likely to face school discipline than their white peers.

Today, the Cook sisters enjoy wearing natural hair styles – Mya prefers a wash-and-go, and both sisters say that, despite the “rocky start,” they still love wearing braids. They also hope the CROWN Act will be passed on the federal level so more people can be protected from hair discrimination. 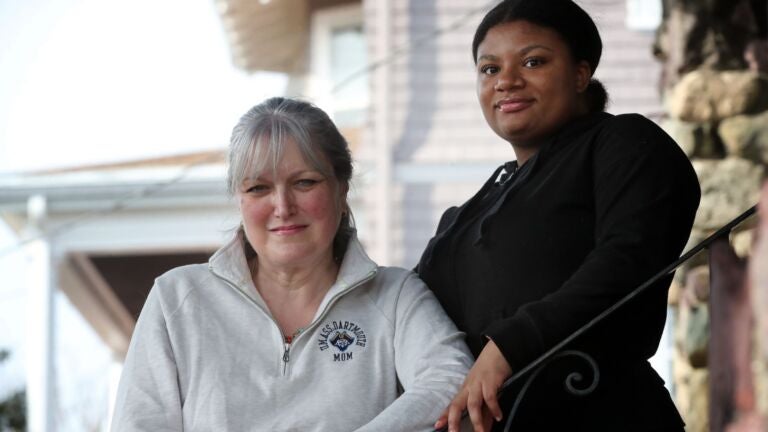