When an MBTA Framingham Line train lost power in Allston-Brighton during the Monday evening rush hour, some passengers exited the train cars and climbed over a fence.

The train stopped just west of the Boston Landing station around 6 p.m., after leaving South Station at 5:35 p.m., according to The Boston Globe.

The MBTA, in a statement to the newspaper, said the train stopped “due to an electrical issue with the locomotive.”

The lack of power also meant a lack of air conditioning — passengers took to social media to share how hot the train was inside, the Globe reports.

Leo Ruiz, one passenger, said the train sat without power for over over an hour, according to the newspaper.

Ruiz posted a video on Twitter depicting some passenger using ladders to climb over a fence adjacent the railroad tracks after prying open the doors of the train.

“Some passengers on @MBTA_CR train forced open doors to get out & climbed the fence with a little help from neighbors,” Ruiz wrote.

The MBTA said workers had discouraged people from leaving the train cars.

“Due to the location where Train 595 was stopped, it was determined that the safest option was for passengers to remain on board,” the agency said in its statement. “Although urged by the Keolis train crew to not exit the train, some passengers decided to use the emergency door handles and exit the train.

“The MBTA and Keolis understand that passengers were frustrated while the train was stopped without electricity to enable air-conditioning or announcements, but the safest alternative in such a situation is to keep passengers on board.”

A Worcester-bound train was eventually brought in to help bring the stalled train back to the Boston Landing station, according to the Globe. Passengers were then transferred to another train heading to Worcester. 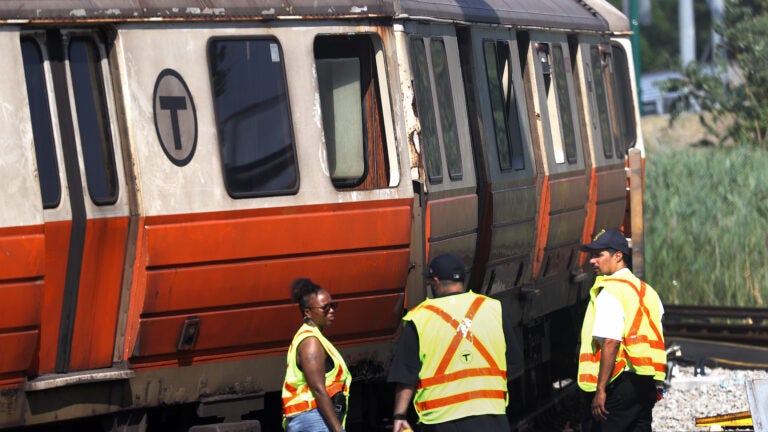