MBTA Orange Line riders are getting a big shake-up to their commutes.

Beginning at 9 p.m. Friday, the T branch will completely close for 30 days — an unprecedented move Gov. Charlie Baker and the MBTA contend will provide ample opportunity for long-needed repairs to make service on the line safer and more efficient.

Nonetheless, since the project’s announcement earlier this month, local and state officials have warned the work will undoubtedly create some headaches for T riders — and all other commuters in the area, more or less.

MassDOT Highway Administrator Jonathan Gulliver, at a press conference on Monday, suggested that with the expected ensuing congestion, if possible, drivers may want to “avoid the region altogether until the diversion period has ended.”

“I know that some of the transit users may be considering driving as an alternative to the shuttle buses. I assure you that that is not a good option and you should look to other transit options,” Gulliver said. “We are urging travelers to evaluate their commute and, if possible, adjust or look for a route that avoids the shuttle diversion if you must drive in, and shift your travel time to off-peak hours.”

Simply put, there is broad consensus from local leaders that Orange Line riders should brace themselves for a tough few weeks.

“It will be impossible to avoid chaos altogether,” Boston Mayor Michelle Wu told reporters on Thursday.

The closure is not the only hit to the system this month, though: The MBTA is also closing the Green Line between Union Square and Government Center stations beginning on Aug. 22 for 28 days.

Here’s what to know as the Orange Line shutdown takes hold:

Why the T is shutting down the Orange Line

The shutdown follows a turbulent few months for the MBTA.

The system’s safety woes have been put on full display again, especially in May, when a man was dragged to death by a Red Line train.

The Federal Transit Administration is now probing the safety practices of the local transit authority — a process that was ongoing even last month when an Orange Line train burst into flames above the Mystic River during the morning rush hour.

Baker and MBTA General Manager Steve Poftak said earlier this month that by shutting down the entire line — an unprecedented move — work crews will have around-the-clock access to the line’s rails and tunnels. That access means workers will be able to get through repairs and improvements that would typically take five years to complete if they were working only during off-peak times, such as nighttime construction and weekend work closures.

On the short list of that work: track replacement, upgraded signal systems, and station improvements.

“Thirty days of 24-hour access to the Orange Line replaces over five years of weekend diversions needed to address delays and slow zones,” Poftak said in a statement announcing the closure earlier this month. “We can eliminate slow zones, prevent unplanned service disruptions, and increase the reliability of our service. Perhaps most importantly, we will provide the quality of safety and service that our riders deserve.”

Over 3,500 feet of track is expected to be replaced. Officials say new track will help the MBTA lift speed restrictions that currently slow down Orange Line trips.

“Likely within five to 10 days after the shutdown ends, you’ll see those speed restrictions come off,” Poftak told reporters on Friday.

Additionally, crews will replace two crossovers — an improvement that will boost capacity and reliability on the line.

Poftak reiterated that when the line reopens in September, the long-awaited new Orange Line train cars will comprise most of the fleet.

“At the end of the day, we will have safer, more reliable, and faster service on the Orange Line,” he said.

How to get around

Would-be Orange Line — and Green Line — riders will have a couple of options to get around, depending on where they want to go.

For Orange Line riders, the T will offer free shuttle buses between Oak Grove and Haymarket/Government Center and between Forest Hills and Back Bay/Copley.

To handle the job, the MBTA is bringing in what Poftak has repeatedly said is “every accessible bus east of the Mississippi.”

“We have drivers coming from all over the country,” he said Friday.

“They have been out practicing the route,” he added.

In sum, Boston officials are bracing for up to 200 buses on the city’s streets.

To accommodate the influx, the city has announced several traffic changes and the formation of what it calls two transit hubs: one at Government Center and another in Copley Square.

Both are intended to help ease transfers between the Orange Line and the Green Line, Jascha Franklin-Hodge, the city’s chief of streets, said on Thursday.

“So we’ve set aside an extensive amount of curb space in these locations to allow for efficient shuttle bus loading,” he told reporters. “We’ve created temporary bus lanes and restricted access along certain segments of street to make sure that the shuttle buses have the space that they need to move.”

In Copley Square, shuttle buses that serve the southern branch of the Orange Line will travel down Columbus Avenue and loop around the square to make connections to the Back Bay.

Bus-only lanes have been added on Columbus Avenue and on Dartmouth, Boylston, and Clarendon streets.

Shuttle buses serving the northern branch of the Orange Line and the Union Square branch of the Green Line will all board at Government Center, according to Franklin-Hodge.

Bus-only lanes have been created on Congress, State, Court, and Cambridge streets.

Additionally, there will be “extensive” parking restrictions on the streets that have dedicated bus lanes.

According to Wu’s office, the city has worked with MassDOT to provide dedicated bus lanes on the Gillmore Bridge between Cambridge and Charlestown, on Rutherford Avenue, and in Sullivan Square.

The Silver Line and Commuter Rail

Earlier this week, Wu and other Boston leaders called on the MBTA to provide a shuttle bus stop at least at the Chinatown station, citing the neighborhood’s heavy reliance on the Orange Line, especially residents who have mobility challenges.

In response, the MBTA said it will add an outbound stop on the Silver Line 4 route to provide service in the Chinatown area. The Surface Artery at Kneeland Street stop will be extended for access to the neighborhood.

Poftak, on Thursday, said the agency is also adding a “supplemental shuttle” to run every 30 minutes between Government Center and Tufts Medical Center and Chinatown from 5 to 7 a.m. and between 8 p.m. and 1 a.m.

Poftak also noted the MBTA intends for the Boylston station on the Green Line, near the Chinatown and Tufts Medical Center stations, to provide connections to riders in the Chinatown area.

“Running buses through the heart of downtown Boston is extraordinarily challenging,” he said. “We’ve tried to address that by piggybacking on the Green Line here. We’re also going to try and run as much additional service on the core of the Green Line as we can … to absorb the needs of our customers.”

Because the Boylston stop is not accessible for people with mobility challenges, the MBTA will have accessibility vans available at the Park Street and Copley stations for those who need transportation to either Tufts or Chinatown, Poftak added.

Passengers can ride the Commuter Rail in Zones 1A, 1, and 2 at no charge by showing their CharlieCard or CharlieTicket to conductors. Trains operating parallel the Orange Line will be making stops at Forest Hills, Ruggles, Back Bay, North Station, Malden Center, and Oak Grove.

Not sure what route to take?

Riders may want to consult the MBTA’s trip planner, which apparently has been updated to include the Orange Line closure diversions and new time estimates due to the shutdown.

The MBTA also has a 16-page guide for riders to learn more about the various options available to them for getting around.

Commuters can also make use of the city’s growing network of bike lanes and other cycling infrastructure.

And for those without their own set of wheels, there’s an easy way to get ahold of some.

“Passes will be available on bluebikes.com and in the Bluebikes app beginning Friday, August 19,” Wu’s office said in a news release. “Additionally, the City will be providing more bike storage racks downtown and installing temporary bike lanes along Columbus Ave. in the South End and along Boylston Street in Back Bay.”

According to title sponsor Blue Cross Blue Shield, there will be additional Bluebike valet service at four Bluebikes stations during peak hours.

“With an expected increase in Bluebikes ridership during the Orange and Green Line closures, the valet service will help expand bike and dock availability at some of the busiest stations and provide an accessible and alternative mode of transportation during the shutdowns,” BCBS said in a statement. “The additional valet support, sponsored by Blue Cross and in partnership with the City of Boston, will be available to riders at select Bluebikes stations weekdays from Monday, August 22, through Friday, September 16, during the hours of 7-11 a.m. and 3-7 p.m.”

To locate valet service locations in real time, riders can use the “System Map on the Bluebikes website or the Bluebikes app and look for the Valet icon at your destination station to confirm service is active,” according to BCBS.

Keep in mind: Traffic congestion is expected to be worse than usual

Even if the Orange Line shutdown isn’t a roadway construction project, state transportation officials are warning drivers will feel the impact of the closure, too.

“To be clear, the shutdown will have substantial regional travel impacts,” Gulliver, the MassDOT highway administrator, said earlier this week. “It is evident that significant congestion will be felt throughout the region.”

There appears to be no way of getting around the traffic pinch — so much so, that Gulliver even suggested drivers should avoid driving anywhere near downtown Boston during the duration of the closure.

In some areas, the roadway capacity will decrease by 50 percent to give priority to shuttle buses.

“We expect to see more traffic congestion on various highways, intersections, and routes … for drivers, bikers, and pedestrians as MassDOT and especially the city of Boston make roadway changes to accommodate these buses,” Baker said.

What else to know

Poftak said the MBTA will continue to update riders throughout the course of the shutdown, possibly with press conferences every two to three days. One conference is already scheduled for Monday, the first weekday affected by the shutdown.

To learn more about the shutdown and overall project, riders can also check out the MBTA website or consult a special Orange Line shutdown page on the city’s website at boston.gov/orangeline. 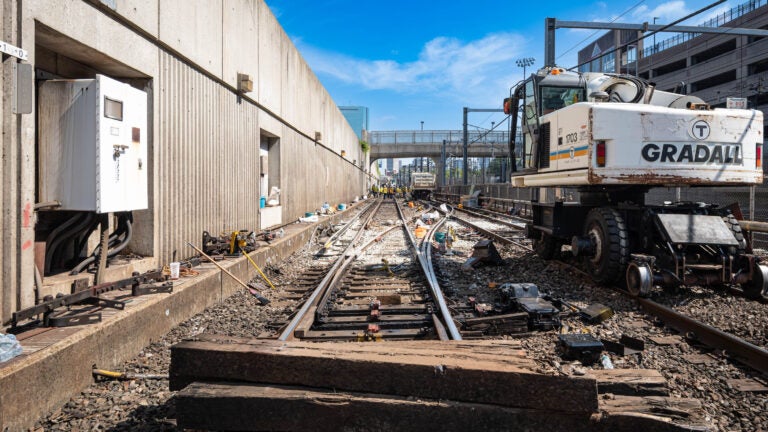