A serious traffic accident upended the life of a family in New Hampshire last week.

The three-car crash on Route 16 in Albany on Friday evening killed 8-year-old Gabriel Simpson and seriously injured his 11-year-old brother, Jeremiah, and parents, Christine and Kyle.

New Hampshire State Police are still investigating the tragic incident but said the preliminary investigation shows that a 2018 Ford F550 was headed south on Route 16 when it collided with a 2020 Kia, and then the Kia collided with a 2015 Volvo. The Simpson family was reportedly in the Kia.

A GoFundMe page launched Sunday afternoon by Melinda Paradie identified the family and explained the long road of recovery ahead of them.

“On Friday evening tragedy struck the Simpson Family when they were in a horrific accident resulting in the unbearable loss of their beloved 8 yr old son & brother Gabriel as well as significant injuries to the other family members,” Paradie wrote.

“11 yr old Jeremiah, Gabriel’s brother & best friend, will be recovering for several weeks from not only a broken ankle but also a broke heart,” the family friend continued. “Mom Christine, a hairstylist, suffered a broken pelvis & arm which will keep her out of work for the foreseeable future while dad Kyle who works with underrepresented students is looking at months of recovery from surgery to repair nearly all of his ribs which were crushed.

“It’s an understatement to say there’s a long road ahead for this family, not only recovering from their physical injuries, but also the mental anguish in trying to cope with the loss of their son & brother,” Paradie wrote.

The community support for this family poured in almost immediately. As of early Tuesday afternoon, over 1,000 donations had been made on the GoFundMe page, raising more than $15,000 over the initial $100,000 goal.

Grief counseling was set up at both McDonough Elementary School in Manchester, where Gabriel was reportedly a student, and Manchester School of Technology, where Gabriel’s father worked, according to the New Hampshire Union Leader.

As police continue with their investigation, anyone who saw the crash or the events leading up to it is asked to reach out to Trooper First Class Nathaniel Goodwin at [email protected]. 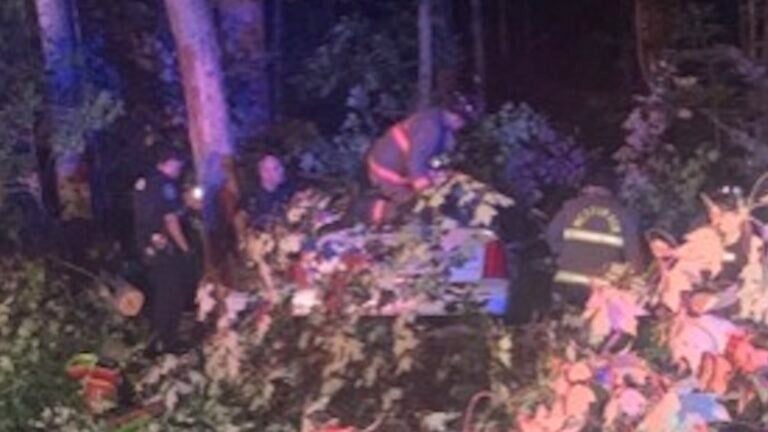