MANCHESTER, N.H. — He has said the state’s popular Republican governor is “a Chinese Communist sympathizer,” called for the repeal of the 17th Amendment allowing direct popular election of senators and raised the possibility of abolishing the FBI.

The man behind these statements is Don Bolduc, a retired Army general who leads the Republican field in what should be a competitive race for the New Hampshire Senate seat held by Sen. Maggie Hassan, a Democrat.

In one primary after another this year, Republican voters have chosen hard-right candidates who party officials had warned would have trouble winning in November, and Bolduc could be on course to be the next. Like him, many embraced former President Donald Trump’s election denial. “I signed a letter with 120 other generals and admirals saying that Donald Trump won the election and, damn it, I stand by” it, Bolduc said at a recent debate.

The suddenly fraught midterm landscape for Republicans caused Sen. Mitch McConnell, the GOP leader, to complain recently that poor “candidate quality” could cost his party a majority in the Senate that had long seemed the likely result.

In the final competitive primary of the year, scheduled for Sept. 13, Republican officials in New Hampshire are echoing McConnell. They warn that grassroots voters are poised to elect another problematic nominee, Bolduc, and jeopardize a winnable race against a vulnerable Democrat.

This month, Gov. Chris Sununu, a Republican moderate broadly popular in his purple state, said on New Hampshire talk radio that Bolduc was a “conspiracy theorist-type candidate.” He added: “If he were the nominee, I have no doubt we would have a much harder time trying to win that seat back.”

Bolduc, who served 10 tours in Afghanistan, held a formidable lead with Republican voters in a poll this month, in large part because he has barnstormed continuously for more than two years, while his rivals joined the race later. The contest was effectively frozen for a year until November, when Sununu, a top recruiting target of national Republicans, declined to run for Senate, deciding instead to seek a fourth term as governor.

Bolduc has built a following by offering red meat to the conservative base. But New Hampshire is a politically divided state where Republicans who win statewide traditionally appeal to independents and conservative Democrats. Its four-member congressional delegation is entirely Democratic; state government is firmly in the hands of Republicans.

“We’re not a red state; we’re not a blue state; we’re a weird state,” said Greg Moore, a Republican operative not involved in the Senate primary. He was skeptical that Bolduc, after targeting only his party’s base, would be able to attract a broader coalition in November.

In a debate Wednesday outside Manchester, Bolduc denounced the provision in Democrats’ Inflation Reduction Act authorizing Medicare to negotiate lower drug prices, saying, “Anything the government’s involved in, it’s not good; it doesn’t work.”

Bolduc, 60, is a compact figure who still sports a military haircut close-cropped on the sides. In the minutes before the debate went live on Newsmax, while other candidates studied their notes, he spontaneously led the audience in the Pledge of Allegiance and in singing “God Bless America.”

A poll this month by the New Hampshire Institute of Politics showed Bolduc with support from 32% of registered Republican voters, well ahead of his closest rival, Chuck Morse, the state Senate president, who was at 16%. Others in the poll, including Smith, a former Londonderry town manger, were in the low single digits.

All of the candidates have struggled to raise money and draw voters’ attention — 39% of Republicans said in the poll they were still undecided.

That gives Bolduc’s rivals hope, although time is running out: The primary is just one week after Labor Day, when most voters traditionally tune in.

Hassan has long been seen as vulnerable. Just 39% of voters in the Institute of Politics survey said she deserved to be reelected.

At the debate outside Manchester, the candidates bashed Hassan, a former governor, linking her to rising gas prices and expected high prices for home heating oil this winter.

Hassan, in response, defended voting for Democrats’ climate and prescription drug law. “While I’m fighting to get results for New Hampshire, my opponents are out on the campaign trail defending Big Oil and Big Pharma and bragging about their records of opposing a woman’s fundamental freedom,” she said in a statement.

Trump has made no endorsement in New Hampshire, and he may not make one at all. He snubbed Bolduc in a 2020 Senate primary, endorsing a rival. Neither Bolduc nor Morse have spoken to Trump lately about the race, according to their campaigns.

Corey Lewandowski, Trump’s first 2016 campaign manager, who is a New Hampshire resident, has publicly urged his former boss not to back Bolduc, calling him “not a serious candidate.”

Bolduc declined to comment for this article. Rick Wiley, a senior adviser to Bolduc, said the criticisms of him — that he is unelectable, that independents won’t vote for him — were the same ones thrown at Trump in 2016.

“The electorate wants an outsider; that is resoundingly clear,” Wiley said. Shrugging off Sununu’s criticisms, he added: “I expect we’re probably going to be sharing a ballot with the governor. There will be unity on the ticket in November, and Republicans up and down the ballot will be successful because of the policies Biden and Maggie Hassan have put in place.”

The biggest primary threat to Bolduc, and the preferred candidate of much of what remains of the GOP establishment, is Morse, a low-key, self-made tree nursery owner with a strong Granite State accent, who appears in his TV ads riding a tractor at dawn at his operation in southern New Hampshire.

Despite his prominent role in state government, a poll in April found that 54% of Republican voters didn’t know enough about Morse to have an opinion. Just 2% named him as their choice for the nomination. His ascent to 16% in the latest public poll this month is seen by supporters as a sign of momentum.

Dave Carney, a strategist for Morse, agreed that Bolduc was the race leader. But he said that Morse’s superior fundraising, which allowed him to buy TV ads, was raising his profile and predicted that he would continue to gain on Bolduc.

“Sixty-one percent of the voters are willing to replace Hassan,” Carney said, referring to the share of voters in the Institute of Politics survey who said that it was time to give someone new a chance to be senator or that they were undecided. “We need to nominate somebody who can do that.” He called Bolduc a “flawed candidate,” adding, “I don’t think there’s any way in hell he could get conservative Democrats or the vast majority of independents to go his way.”

Morse had $975,000 in his campaign account as of July, compared with Bolduc, who had just $65,000. Hassan’s $7.3 million on hand has allowed her to aggressively spend on TV ads all year, including one promoting her work for people with disabilities that features her son, who was born with cerebral palsy.

The National Republican Senatorial Committee, which this month slashed its planned spending in three battleground states — Pennsylvania, Arizona and Wisconsin — has kept a commitment to spend $6.5 million on the New Hampshire race after the primary, reflecting its belief in Hassan’s vulnerability.

With the Senate divided 50-50 between the parties and Democrats optimistic about flipping at least one seat, in Pennsylvania, Republicans need to take down two or more Democratic incumbents to win a majority. Their top targets are in Georgia, Arizona, Nevada and New Hampshire.

At the recent debate, the audience was mostly committed supporters of each of the candidates, with few appearing undecided. Bolduc fans dismissed out of hand Sununu’s view that their candidate would have a hard time in November.

“Sununu is a globalist clown and is not a Republican,” said Kelley Potenza, a candidate for the state House of Representatives who is from Rochester. “He’s afraid because Don Bolduc is the only candidate that’s not going to be controlled.”

In the audience before the lights went down, Bill Bowen, a recent transplant from California and a Morse supporter, said Bolduc had reached his ceiling in the polls. He said supporters of Bolduc who ignored doubts about his electability in November were misguided.

“That’s all that matters,” he said, adding, “This is the 51st vote,” referring to a potential Republican majority in the Senate. 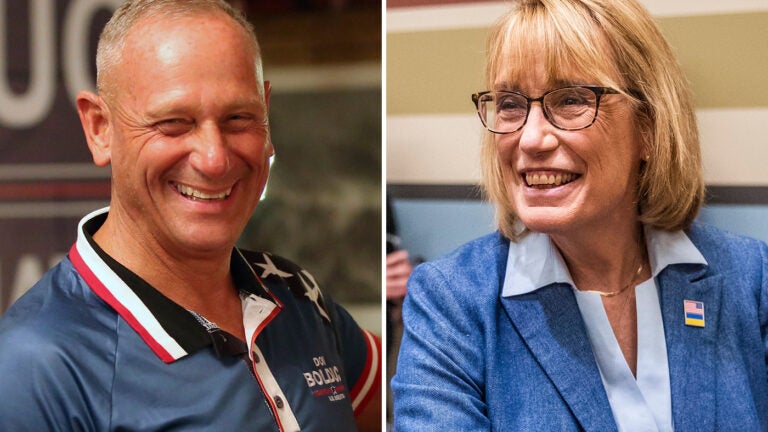