A coyote ran off with a chihuahua in Hyde Park early Monday morning.

Lisa Rampino told NBC Boston that she saw a coyote snatch up her 11-year-old chihuahua, Biscuit, from her yard.

“It ran so fast,” she said. “It was just, like, boom — lightning down the sidewalk. Just gone.”

Rampino chased the coyote from the steps of her home down the street, but eventually lost sight of the animal. She told NBC Boston she still hasn’t been able to find her dog’s body after a lengthy search in nearby woods.

This is one of multiple attacks on small dogs by coyotes in recent days. In Dedham, a small dog named Shaggy was also snatched from his front yard Tuesday evening. Shaggy’s owner was able to scare the coyote into dropping the dog.

“The photo depicts the distance between Shaggy and his owner. It wasn’t much,” Dedham police wrote in a Facebook post about the incident.

Shaggy was said to have sustained “minor injuries,” but survived.

“Had Shaggy’s owner not been present while Shaggy was outside, this would likely have ended tragically,” police wrote.

This follows an August 25 report that at least three dogs have been killed by coyotes in Greater Boston in the last few weeks. Wildlife authorities say that as the season of autumn approaches, coyotes will begin a feeding pattern which will bring them closer to more densely populated areas, including residential neighborhoods.

Pet owners are advised to feed their animals indoors, install proper fencing, and to supervise their animals outdoors at all times.

“This incident illustrates that the way to keep our pets even more safe, is to be right next to them — so that if the coyote sees the pet, then he also sees the human. Usually, the presence of the human will deter the coyote,” Dedham police wrote. 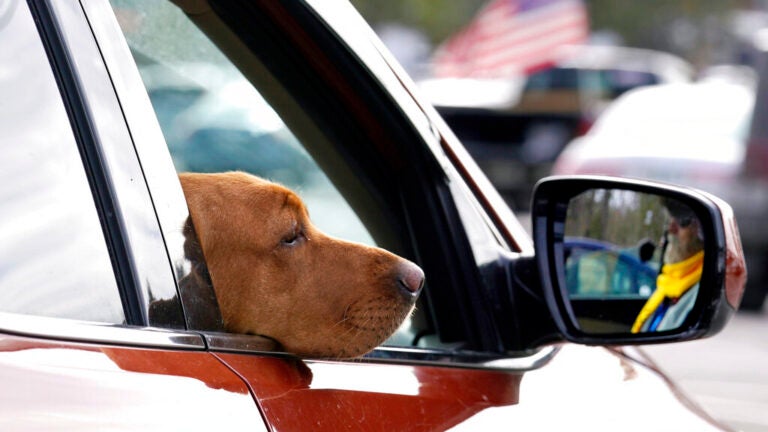