Massive plumes of smoke billowed through the sky in Worcester Monday, as the roof of a new school under construction caught fire and injured one person.

The fire was reported just after 3 p.m. at 299 Highland St., the location of Doherty Memorial High School, Worcester Fire Deputy Chief Adam Roche said at a press conference streamed by WCVB. A new school complex is being built next to the current school.

Firefighters responded to the scene and found heavy smoke and flames coming from the roof of a building under construction. The fire was elevated to three alarms and extra personnel were brought in to help contain the flames.

The fire was under control in about 30 minutes, Roche said. Since the fire was on the building’s fifth story, firefighters used an “aerial apparatus” to keep it under control.

“We’re always concerned about buildings under construction, the structural integrity. We don’t know the stages of construction right away, so collapse was a forethought in our minds,” Roche said.

One person, a worker who had been at the scene, was brought to a local hospital. There was no immediate word on their injuries, but they are not believed to be serious.

The heavy smoke that people in the area saw was the result of foam roofing insulation that caught fire. It was put on the roof earlier on Monday, Roche said. The cause of the fire is still under investigation, but preliminary information suggests that the roof has some structural damage.

The building in question is one of four new ones being constructed there. Although the current Doherty High School is located next to the construction site, school had already been dismissed for the day and no staff or students were put in danger, Roche said. No other buildings were affected by the fire.

School at Doherty High is expected to resume Tuesday without interruption.

“It’s a big project, it’s a $300 million dollar project,” Worcester Mayor Joe Petty said at the press conference. “It’s like a punch to the gut a little bit. You put a lot of time and effort… a lot of time went into the planning of this school over several years. It’s supposed to be ready in 2024, and hopefully, that will continue to be the case.” 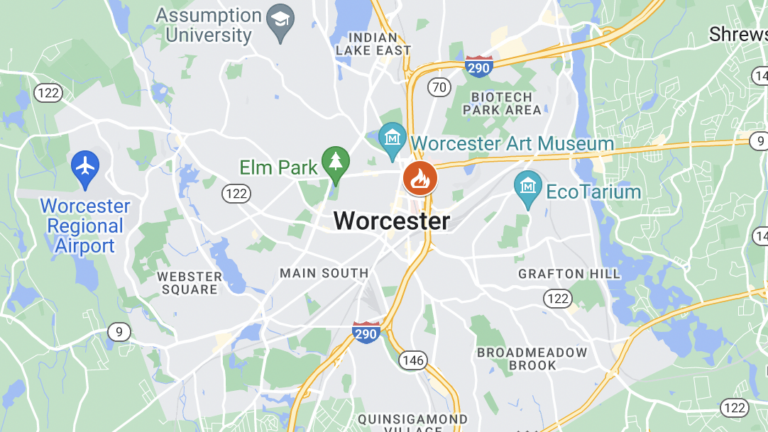