When Rep. Jim Langevin (D-R.I.) made plans to travel to military bases in Italy last month, the Defense Department called ahead to make sure his power wheelchair would be permitted on the flight.

But Langevin, who is a quadriplegic, never made it past the check-in counter.

When airline staff learned that his wheelchair used lithium-ion batteries — a lighter weight, more durable type of battery — they refused to let him bring it on the flight. Although federal and international aviation officials have ruled that the batteries can be transported safely, Lufthansa employees at Boston Logan International Airport wrongly cited safety concerns that the battery could overheat and catch on fire.

The congressman is among a growing number of people with disabilities who use mobility devices powered by lithium ion batteries. The new battery is a boon to people who use power wheelchairs and other mobility devices because the lightweight and high-energy capacity means customers can more easily transport their chairs, and often go farther on a single charge and with more time between charges.

But people with disabilities say flying with a wheelchair powered by the new battery can be unpredictable. They say airlines often impose additional restrictions on the batteries, and individual employees sometimes enforce rules incorrectly and inconsistently. Travelers have shared stories of stressful arguments with airline workers, embarrassment in front of other passengers and, like Langevin, being forced to cancel plans.

“I’m angry, and I find it outrageous that they can just make up their own rules and basically ignore what’s been approved by the [Federal Aviation Administration],” Langevin said.

In addition to showing airline employees a letter from his wheelchair’s manufacturer stating that the chair met federal and international aviation safety requirements, Langevin also put the wheelchair’s inventor on the phone with a supervisor to explain why the chair was safe, he said. He still wasn’t allowed on the flight.

This was the second time this year he was stopped from boarding a flight because of his wheelchair battery, he said.

Christina Semmel, a Lufthansa spokesperson, said the company was “regretful” over the error.

“At times, there have been challenges when it comes to customers traveling with lithium batteries, as there are complex and detailed rules and regulations related to this,” she wrote in an emailed statement. “We apologize for the error made due to the misinterpretation of the technical guidelines.”

She added that Lufthansa employees will be undergoing a “comprehensive review” of guidelines around lithium batteries to prevent similar incidents.

In the end, Langevin was able to book a new flight for later that day after a staff member brought him an older wheelchair from his home in Rhode Island. But most people probably don’t have that option, especially if they’re hours from home, he said.

Carlos Araujo, 59, of San Clemente, Calif., was looking forward to going to Cancún in the spring with his wife to celebrate their 31st anniversary. Though Araujo has multiple sclerosis, his foldable, lightweight wheelchair would allow him to tour famous Mayan ruins such as Chichen Itza alongside his wife, and could easily be lifted and stored in the trunk of most vehicles, he said.

Before his flight from Tijuana, Araujo contacted Volaris, the Mexican airline, and received emails assuring that he would be allowed to check his wheelchair, per airline policy.

Yet, when Araujo arrived at the airport, Volaris employees refused, even after he shared the email from the customer service staff and a letter from the manufacturer showing that the chair met federal and international aviation standards. After four hours of arguing with staff, Araujo missed his flight.

“It was hell that day,” he said. “I was so kind of despondent and in shock, I didn’t know what to say the rest of the afternoon.”

The couple booked a different flight to Cancún with American Airlines and eventually got their money back from Volaris, but they missed the first three days of their vacation and incurred nearly $200 in extra costs.

Volaris did not respond to a request for comment.

It’s unclear how common it is for passengers to experience issues with lithium batteries, but in 2018, the most recent year data are available, passengers filed 310 disability-related complaints with the Transportation Department about air carriers refusing to let them board. Of those, 44 were marked as related to paraplegics, quadriplegics, other types of wheelchair users and other assistive-device users.

Some wheelchair users say they always feel anxiety about whether they’ll be allowed to fly. Tracey Mendenhall Porreca, 58, of Delta Junction, Alaska, said she has argued with airline workers about whether her wheelchair is safe to be on a plane.

Three years ago, Mendenhall Porreca said a gate agent initially stopped her from boarding an American Airlines flight on the way back from Chattanooga, Tenn., even though she had flown there with the same airline.

“I understand why these rules are in place. My frustration comes from the lack of education and the lack of training, especially on the part of the airlines,” she said.

American Airlines said it updated its lithium battery procedures for mobility devices in 2021, and its policies are fully aligned with FAA regulations.

Aviation rules require that batteries attached to wheelchairs in the cargo hold be protected with a case or covering. Under certain conditions, batteries may need to be removed and placed in carry-on luggage, as long as they are under a specified energy limit.

Solving the problem represents a significant quality-of-life issue for people who use power wheelchairs.

Wheelchairs have been getting heavier, in part because manufacturers use cheaper lead acid batteries, which can weigh 100 pounds or more, about twice as much as lithium batteries, said Rory Cooper, founder and director of the human engineering research laboratories at the University of Pittsburgh, which tests and designs mobility devices for different manufacturers. Some wheelchairs now weigh more than 400 pounds, which can make it difficult to put the chair in a car or onto some wheelchair lifts.

Even though the lithium-battery-powered devices cost about three times more and often aren’t covered by insurance, consumer demand for them is growing and expected to keep rising, said Brad Peterson, vice president of sales for Amylior, a Canadian-based maker of power wheelchairs.

Anna Ward, 25, of Cambridge, England, switched to a wheelchair with a lithium-ion battery because her old one was bulky and weighed about 182 pounds. Her new chair folds up and weighs about 55 pounds.

She booked a flight with Ryanair from London to Milan in July, checked their wheelchair policy and emailed customer service to confirm that she could bring a spare battery on the flight.

But when she tried to get on the plane, special-assistance employees with ABM, a third-party contractor, refused to let her board.

Ward showed the email confirmation from Ryanair’s customer service team but said the employees only relented once she threatened legal action. The flight was delayed by an hour as a result.

“I get on the plane and literally someone goes, ‘Oh, that’s why we’re late,’ and I just sat there, crying,” she said. “This has been the most humiliating journey of my life,” she added.

Ryanair issued a response statement saying, “We sincerely regret the inconvenience caused to this passenger as a result of ABM’s cursory oversight and are working with them to ensure this error does not recur.” ABM and London Stansted Airport, which has a contract with ABM, apologized for the incident and said they are conducting “extensive retraining” for staff.

Langevin, along with other disability advocates, has been calling for stronger protections for passengers. Legislation giving passengers the right to sue airlines if they feel their rights are violated has stalled.

“It seems like it’s only a matter of time until these types of wheelchairs become the standard, meaning that situations like these will become ever more frequent,” Langevin said. 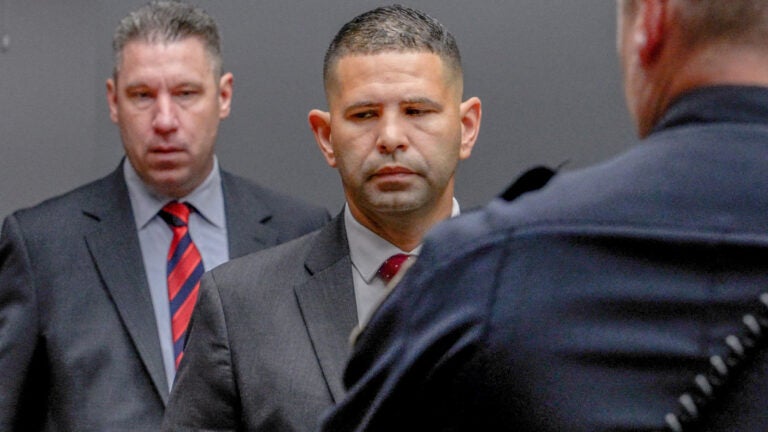