CAMBRIDGE, Mass. — On a cloudy day this summer, Roberta Wolff-Platt paid a visit to Christ Church, a short walk from Harvard Yard. Standing at the edge of a crypt in the church basement, she marveled that her ancestor Darby Vassall, born enslaved, had been buried here, improbably sharing a grave with the couple who owned his parents.

Wolff-Platt, who is 80, learned just a few years ago that she was related to the Vassalls. That revelation led to an even more surprising connection — to Harvard University — a place she had lived near for much of her life but where she had never imagined she belonged.

Thanks to a student research project on the university’s ties to slavery, she and her extended family have become the first to be publicly identified as descendants of enslaved men and women who served Harvard’s presidents, professors and — in their case — benefactors.

To talk about the possibility that her ancestors were enslaved was a family taboo, Wolff-Platt said. “It shouldn’t be that way, but the older people, they never spoke of it.”

Now she has been swept up in Harvard’s campaign, announced in April, to make amends for its collusion in the slave trade. As part of that effort, Harvard plans to trace the lineage of enslaved people at the college to the present day, saying that direct acknowledgment of lineage “is a vital step in its quest for truth, reconciliation and repair.”

Harvard joins universities like Georgetown, Brown and the University of Virginia in trying to atone for their links to slavery, by erecting monuments, renaming buildings and in Georgetown’s case, offering the children of descendants the equivalent of legacy status for admission.

Harvard has pledged $100 million, largely as an endowment, to its project. If the experience of other universities is any guide, it is likely to be a contentious process. Both the university and the descendants are debating: What is justice now, not only for the families of the enslaved, but for society?

But beyond the money, the project offers the possibility that Wolff-Platt and her family could get a fuller picture of how their ancestors’ involuntary labor played an unsung role in establishing the university’s prestige and riches.

“It was astounding,” she said. “Who were these people, what happened to them?”

For Wolff-Platt, the new information has meant reconsidering her past, and the forces that have subtly shaped her life.

Wolff-Platt first learned of her connection to enslaved people from James Shea, a former curator at Longfellow House, a national historic site in Cambridge, Massachusetts, when they were both doing research on ancestry.com in about 2016. But it was Carissa Chen, a Harvard student, who underlined the Harvard connection.

In the winter of 2020, Chen took a course on Harvard and slavery, taught by Sven Beckert, an eminent historian. She said she was curious about whether she could find any descendants of people enslaved at Harvard, and began searching while sequestered at home in Tustin, California, during the pandemic.

After being foiled by gaps in the records or people passing away childless, she managed to find at least 40 living descendants of one couple, Tony and Cuba Vassall, the parents of Darby. The results became part of her senior thesis.

Tony, a coachman, and Cuba, a maid, were enslaved by Henry Vassall and Penelope Royall Vassall, whose wealth came from sugar plantations in Jamaica and Antigua. Their son, Darby, was born in 1769, at what is now Longfellow House, named for its most celebrated occupant, Henry Wadsworth Longfellow, of “Paul Revere’s Ride.” He was sold or given away while still in the womb, Chen said.

Penelope’s brother, Isaac Royall Jr., has a large place in Harvard history. He left a bequest that was used to endow Harvard’s first law professorship, which led to the founding of the law school. Harvard retired the Royall Chair only this year, in the wake of its slavery report. (In 2016, under pressure from students, the law school abandoned a seal based on the Royall family crest.)

This is not the first time the family has faced the question of reparations. As the Revolutionary War brewed, the loyalist Vassalls fled Cambridge, leaving Tony and Cuba behind, according to historians. In 1780, Tony petitioned the Commonwealth for ownership of a small house and plot of land on the estate — a petition that historians have described as one of the earliest demands for reparations for slavery.

He did not win his claim. But a year later, he secured a meager pension, 12 pounds annually, about $2,400 today, in compensation for his decades in bondage.

Their son Darby was just as determined, legend has it. When his enslaver, George Reed, went to fight in the Battle of Bunker Hill and never returned, Darby, only 6, found his way back to the Vassall home, apparently looking for his parents.

George Washington had commandeered the home as his headquarters, and offered the boy work without pay. Asked later what he thought of Washington, Darby said he was “no gentleman” for expecting him to work for nothing, Chen recounts in her thesis.

Wolff-Platt identifies with Darby’s mettle. “He stood up for what he wanted and didn’t take no for an answer,” she said. “I guess the genes have been passed through. I do what I think is the right thing.”

According to the Longfellow House bulletin, Darby, a caterer, was “employed and befriended by some of the city’s most important and wealthiest residents,” which is part of the story on how he ended up in the crypt.

Chen was struck that so many generations after Tony and Cuba, the family had not moved far from Cambridge. But it was hard not to feel, Wolff-Platt said, that Harvard was far from her family.

“Even though they helped build Harvard College, they weren’t going to give them anything,” she said.

Wolff-Platt had a long and satisfying career working as a customer representative in the airline industry, and until the pandemic and her age interfered, as a greeter at a casino. Her husband, John Platt Sr., worked for Polaroid. Her daughter works for Fidelity, one son works for Siemens, the other for Sun Life insurance. A grandchild is now at Dartmouth College.

She does have a cousin, Dennis Earl Lloyd, who has a connection to Harvard. Lloyd, 75, a retired advertising manager for The Boston Globe, grew up in the Roxbury neighborhood of Boston, a battleground in the school busing wars. He returned from the Vietnam War to a job as a city youth worker, quelling racial tension.

In the 1970s, he participated in a summer program at the university that aimed to bring more people of color into the medical profession, he said, adding, “It didn’t work for me, but I did learn a lot.”

But Wolff-Platt and Lloyd are not on Harvard’s official list of descendants, which is limited to direct descendants of those enslaved on campus or by leadership, faculty or staff — not benefactors.

That exclusion is likely the first of many debates over who is owed reparations, as well as what they are owed. Wolff-Platt said their newfound place in history has already opened a rift over who should speak for the family and who should be the keeper of the family records.

Kenneth Feinberg, who administered the September 11th Victim Compensation Fund, can see many possible conflicts ahead.

Feinberg’s counterpart at Harvard, in a way, is Martha Minow, a law professor who chairs the implementation committee for the project. She brings her expertise on South Africa’s Truth and Reconciliation Commission to the table. She declined to be interviewed, as a did a spokesperson from Harvard.

For her part, Wolff-Platt is not expecting a windfall.

“It doesn’t have to go to any one person or group,” she said.

Lloyd leans toward funding educational advancement. “Some want a check in the mail, others want to establish more of a legacy and an understanding of slavery,” he said.

On that cloudy August day, Wolff-Platt and her eldest son, John R. Platt Jr., took a tour of the sites in Cambridge that figure in their newly acquired ancestral lore.

At Longfellow House, they saw furnishings used by the poet and his family, but little if any trace of Tony and Cuba. The house displayed original collections, the site manager, Chris Beagan, said later, and “we don’t know of any original collections tied to the Black Vassall family.”

A short distance away, a Starbucks now occupies the property where Tony and his family lived after being evicted from the Vassall estate.

They had more luck finding signs of Darby, who became prominent in Black Boston society. A plaque marks the location of the Abiel Smith School and the African Meeting House, which Darby helped found, on a quiet alley in Beacon Hill. Both are now part of the Museum of African American History. Wolff-Platt recognizes it as a neighborhood where her mother once lived.

Christ Church was closed to tourists when they arrived. But when they said they were the descendants of Darby Vassall, the door opened. They followed a church official down a staircase into the musty basement, stooping under duct work to get to an ancient redbrick vault, holding 10 coffins, sunken in the dirt-covered floor.

This is the crypt of Henry Vassall, Penelope Royall Vassall and Darby Vassall.

Darby died at 92, on Oct. 12, 1861, and was buried there three days later, according to his obituary in the Liberator, an abolitionist newspaper. In 1843, he had received a note permitting him to be buried in the Vassall family tomb, a gift from Catherine Graves Russell, the granddaughter of Henry and Penelope, enslavers of his parents.

The Liberator noted his resting place. “The event seemed strange indeed,” the obituary said. “The idea of this tomb being his last resting place was often the subject of his meditation, and he was eloquent in grateful expressions towards her whom he had always regarded as a considerate, rare and valued friend.”

As everyone offered different theories on why Darby would want to be buried there, Chen offered her own. Maybe, she said, he knew here, in Christ Church, he could be found by his descendants — a kind of reparation of its own, nine generations later. 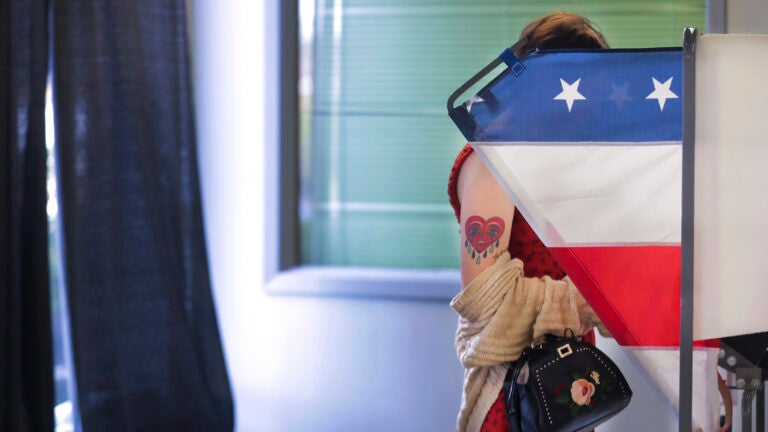 Slavery rejected in some, not all, states where on ballot