Gov. Charlie Baker spoke out on Sunday about the arrival of about 50 migrants on Martha’s Vineyard last week, placing blame on Washington lawmakers for the “screwed up” U.S. immigration system.

“Sending people all over the country, many of whom have no idea why they’re being sent where they’re going, isn’t a solution to the very screwed up immigration system we have in the U.S.,” Baker said, according to NBC10 Boston.

The migrants arrived on the island last Wednesday via two charter planes that began their journey in Texas. Florida Gov. Ron DeSantis took credit for the transport.

Baker did not respond directly to DeSantis on Sunday, though he was critical of the U.S. immigration system.

“Washington needs to do its job, and its job is to come up with an immigration policy that’s enforceable, that works, and that people understand,” he said, according to NBC10.

On Friday, the migrants were voluntarily moved to Joint Base Cape Cod, a military base in Sandwich with a Massachusetts Emergency Management Agency-designated emergency shelter. The Executive Office of Public Safety and Security tweeted a video of JBCC Sunday, showing bunk bed-filled bedrooms, a cafeteria, and a recreation room.

Stumping for a gubernatorial candidate at a rally in Kansas this weekend, DeSantis said Massachusetts “deported those people off the island the very next day,” according to NBC10. USA.gov defines “deportation” as “the formal removal of a foreign national from the U.S.”

DeSantis’s office also doubled down on Florida’s “immigration relocation program” in a Friday release, saying the program “seeks to identify illegal immigrants at the southern border who have been processed by the feds and connect them with voluntary opportunities to reach sanctuary destinations and high-wealth areas that support Biden’s open border policies, welcome immigrants, and have significant resources to care for these individuals.”

However, DeSantis’s migrant strategy has raised a number of legal questions, with some calling on the Department of Justice and state law enforcement to investigate possible human trafficking, kidnapping, and false imprisonment charges.

Lawyers for Civil Rights, a nonprofit that now represents more than 30 of the Martha’s Vineyard migrants, said its clients were lured onto the planes with false promises of work opportunities, schooling, and immigration assistance.

The organization, which said its staff and volunteers have been threatened and harassed and its website “sabotaged,” has called on U.S. Attorney Rachael Rollins and Massachusetts Attorney General Maura Healey to open criminal investigations into the stunt.

LCR shared photos of a brochure the migrants reportedly received at some point during their transport listing various benefits and resources that would supposedly be available upon their arrival.

In its letter to Healey, the organization wrote that those behind the transport “preyed on the vulnerability of our clients — many of whom had suffered deep trauma in their home countries and on their journeys to the United States — and exploited this vulnerability to win trust through false promises.” 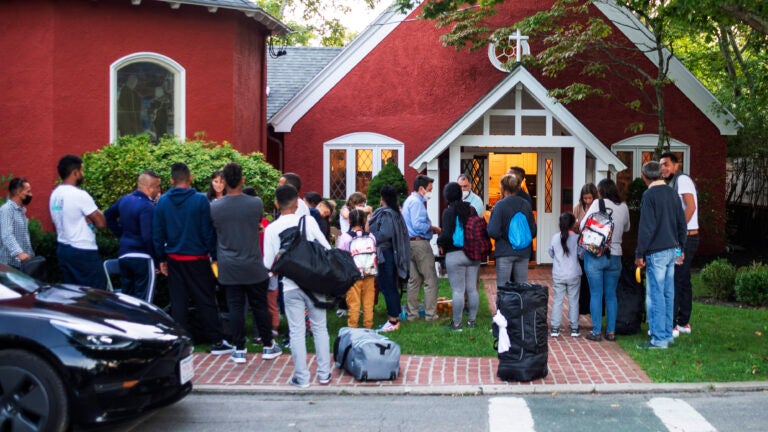