A youth football coach was arrested in Malden Sunday after allegedly throwing a football at a referee out of frustration.

Dana Jones, 50, of Roslindale was coaching a Pop Warner team, the Mattapan Patriots, against the Malden Cyclones at Macdonald Stadium in Malden, when the incident occurred, according to a police report obtained by The Boston Globe. Jones later told police that he believed the other team was cheating, and that the referee was making “bad” calls.

Thomas Abruzzese, the 66-year-old referee, told officers that Jones’ anger spiked after a call Abruzzese made regarding helmet-to-helmet contact. He said that the ball Jones threw hit him in the center of the chest, according to the Globe, and the force caused him to kneel over in pain.

“When I turned, that’s when I got blindsided by this coach throwing the football at me,” Abruzzese said in an interview with the Globe. “I’m still trying to wrap my head around what caused the furor for this coaching staff, and this coach in particular.”

Police interviewed two other referees, who said that they saw Jones “rifle” a ball toward Abruzzese. Another referee said he saw the ball collide with Abruzzese.

In an interview with WCVB, Jones said that he became frustrated after being thrown out of the game.

“I grabbed the ball and — just mad and out of frustration — just whipped the ball, and it happened to hit one of the referees,” Jones told WCVB.

He was charged with assault and battery with a dangerous weapon on a person 60 or older, the paper reported. He pleaded not guilty and was released on personal recognizance. Jones is scheduled to return to court in early November.

Abruzzese told the Globe that he hopes Jones is sufficiently punished for the act.

“I hope he goes to jail, because, quite frankly, this has to stop,” he told the paper. 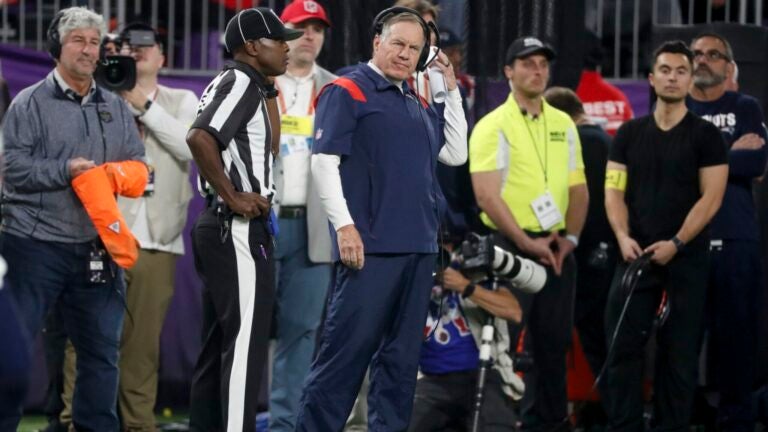