Shoebert, the seal who captured Beverly residents’ hearts during a brief stint in Shoe Pond and later waddled to the police station in the middle of the night, has returned to the ocean.

He was rescued last Friday and had been staying at Mystic Aquarium for observation and a medical assessment.

As it turned out, Shoebert had been to the aquarium before — in 2018, he was rescued on Cape Cod as a pup and spent four months at Mystic rehabilitating injuries to his face and hind flippers, according to the National Oceanic and Atmospheric Administration. Back then, the seal was called “Jekyll,” and he made his way back into the ocean after a partial amputation of one hind digit.

This time around, Shoebert was given a clean bill of health, weighing in at a healthy 235 pounds, according to NOAA. He was released on Tuesday off Block Island, Rhode Island.

“He beelined it into the water faster than ever,” Sarah Callan, Mystic’s assistant manager of animal rescue, told The Boston Globe. “It seemed like he was definitely ready to go.”

Shoebert also received a satellite tag during his stay at the aquarium. It may last several weeks or months, falling off by the time he molts or sheds his fur, according to NOAA.

“Gray seals can travel great distances, often traveling from Cape Cod to Nova Scotia in a matter of days,” NOAA said. “It will be fun to see where he decides to travel to next!”

Back home in the ocean, Shoebert already seems to be making waves.

“It was funny because when we released him, there was a female gray seal that popped up right next to him,” Callan told the Globe. “So, we were like, ‘Oh good, hopefully he gets taken away by the ladies on the island.’” 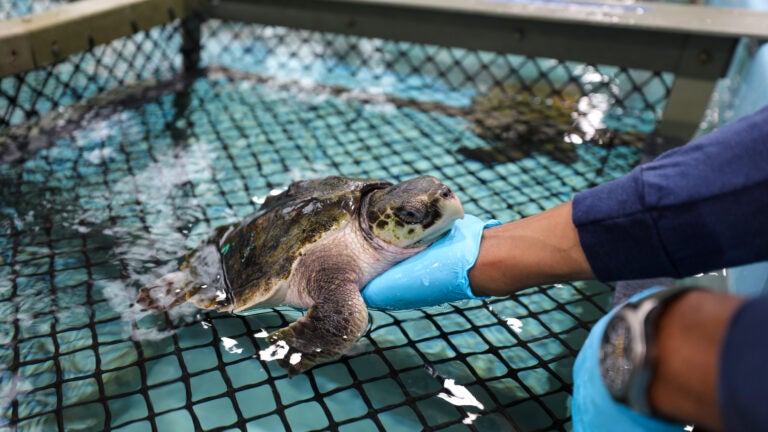