City officials were warned in August that the light poles, known as lighting standards, on the Moakley Bridge needed repairs as soon as possible, almost two months before one of the posts fell on a woman, causing serious injury.

On Aug. 1, a MassDOT engineer emailed a city engineer the copy of an inspection report compiled by the state earlier this year on the bridge, noting that “some of the lighting standards have 100% section loss at the bases and need attention,” WCVB reports.

The report from the state’s Jan. 19 routine inspection detailed a number of problems with the light posts, specifically corroded metal at the bottom of the poles and spalling on the concrete bases.

Overall, the light poles on the bridge were rated a “5” on a 9-point scale, corresponding with a “fair” condition, meaning “all the primary structural elements are sound but may have minor section loss, cracking, spalling or scour.”

The state rated the damage as “severe/major,” urging repair “ASAP” or as soon as “receipt of the Inspection Report,” but not “immediate,” the most urgent designation.

None of the bridge’s elements were deemed “critical” or at risk of immediate failure, but photos in the report show multiple lamp posts with corroded concrete and metal bases.

A woman was seriously injured Tuesday afternoon when one of the light poles on the bridge, which connects Downton Boston to the Seaport via Seaport Boulevard, fell on her. The city’s lighting division and public works crews responded to the scene, and a city spokesperson said that 23 poles of a similar age were removed from the bridge “out of an abundance of caution.”

Temporary lighting has since been installed on Moakley Bridge until permanent replacements are added.

When the city received the report on Aug. 1, it provided the analysis to a bridge consulting firm two days later to develop a work plan based on the MassDOT inspection. As of this week, the work plan is still in development.

“Even though the inspection was done several months ago, the city only received the report in early August of this year and we engaged technical experts two days later,” Mayor Michelle Wu told NBC10 Boston.

In addition to the warning from the MassDOT engineer, residents reported concerns about the light poles multiple times through the city’s 311 system in recent years. A submission from September 2017 showed one of the lamp posts fallen over on its side. Another from October 2018 warned that the “base[s] of most of the light posts are seriously corroded.” A complaint was submitted to the city’s 311 system on Aug. 24 of this year reporting a “rusted out base of lamp post” on the right side of the Moakley Bridge heading into the Seaport. According to NBC10 Boston, another complaint about a rotten pole was filed on Sept. 1.

It is unclear if any of the complaints referred to the post that fell Tuesday.

The bridge and its light poles were built in the 1990s by MassDOT as part of the Big Dig.

Read the state’s inspection report below: 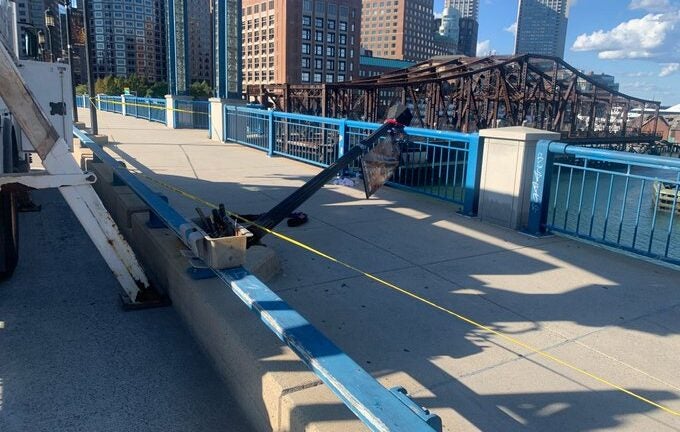