A cat in a very unusual hat was recently rescued in Fall River after concerned bystanders noticed she was just a lost soul swimming in a fish bowl — on her head.

Or rather, a jar. The cat had a jar stuck on its head.

According to a report by Boston 25, a Fall River resident noticed the six-month-old cat hanging around Danforth Street. The concerned citizen then notified animal rescue authorities, who intervened.

The report says that the Animal Rescue League (ARL) of Boston and Fall River Animal control were able to lure the kitten to a drop trap. Even though the cat couldn’t smell with the jar on her head, she followed her siblings to the trap out of curiosity.

WPRI posted video of the ginger cat during the rescue. The small cat is seen skulking around a parking area and then examining its surroundings from the inside of an animal rescue cage.

Buzz Lightyear was brought to the ARL’s Dedham Animal Care and Adoption Center.

The ARL said they are focused on helping the cat get comfortable in her new setting.

“Although the kitten was a bit dirty from living on the streets, ARL’s shelter medicine determined she was in good health and proceeded to provide the kitten with vaccines and spay surgery,” the ARL said in a press release. “Buzz has settled into her new surroundings, however, because she is still learning to trust humans, she will need time for ARL staff and volunteers to help socialize the young cat, and she is not yet available for adoption.”

During the kitten’s rescue, ARL discovered an unknown cat colony in the area. Animal rescuers plan to trap those cats to provide medical treatment, spay and neuter surgery, and assess behavior to possibly place other cats from the colony into loving homes. 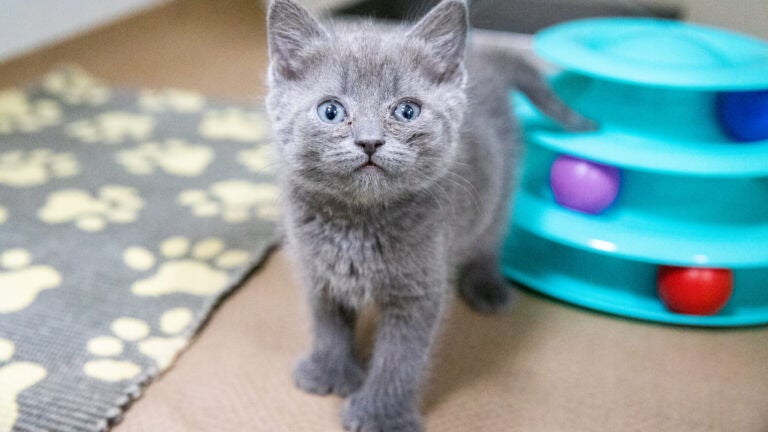