Charlie Brown’s Great Pumpkin? Try giant pumpkin. Three of them, to be exact.

The eighth annual “Official Pumpkin of Boston” — which, this year, is actually a trio of pumpkins — arrived at the Boston Public Market Tuesday.

Two of the three pumpkins come from Art Kazenski of Erving, Mass.: the largest pumpkin is 1,773 pounds and the midsize pumpkin is 1,269 pounds. The smallest, at 773 pounds, is from Lou Chadwick of Swanzey, N.H. The pumpkins are donated by Boston Public Market vendor Red Apple Farm of Phillipston, Mass.

Typically, there are only two pumpkins, a “PumpKing” and “PumpQueen,” but this year, three made the cut. The midsize pumpkin is actually technically a squash, and is now the state record holder for the heaviest squash ever.

John Rose of Red Apple Farm assisted with the moving of the pumpkins.

“We loaded them onto pallets and then into the bed of a truck and drove the hour and a half here,” he explained.

Once the truck arrived in Boston, the crew used a forklift to move them one by one. All three were deposited on the sidewalk outside before being moved into an inside corner of the Boston Public Market.

“Is that real?” one woman wondered aloud as she walked by.

A small crowd gathered, with many taking photos of the pumpkins and marveling at their size.

“I wonder how big the seeds are in those things,” one man said.

“That’d make a lot of pumpkin pie!” said another.

The delivery of the pumpkins to the Boston Public Market heralds the arrival of its fifth annual Harvest Party, the proceeds of which go to the Market’s Community Engagement Fund.

Boston Public Market is an indoor marketplace where everything sold is produced or originated in New England. It is also a nonprofit organization, whose mission is to cultivate a diverse community around food. It aims to support and share the work of a diverse collection of entrepreneurs by subsidizing rent in vendor stalls, developing educational experiences, and enhancing community partnerships with like minded partners in the region.

“Our first event in 2016 was wonderful, as it helped us to build both community and fundraising,” said Cronin.

After skipping the Harvest Party in 2020 and 2021 due to COVID-19, Cronin said they are excited to bring the event back. This year, attendees can choose from three levels of tickets, all with different price points and inclusions.

“Beyond building our Community Engagement Fund, this year’s Harvest Festival is to celebrate, frankly, survival. It was a tough year for the Boston Public Market and for our small business vendors,” she said.

The pumpkins will remain in the Boston Public Market until they rot, according to Rose, which he said will likely be some time in November.

“Once they’re rotten they’ll get smashed so the seeds can be pulled out and replanted,” he said. “That’s the best chance of getting another big pumpkin next year.”

See the process of getting the Boston pumpkins set up: 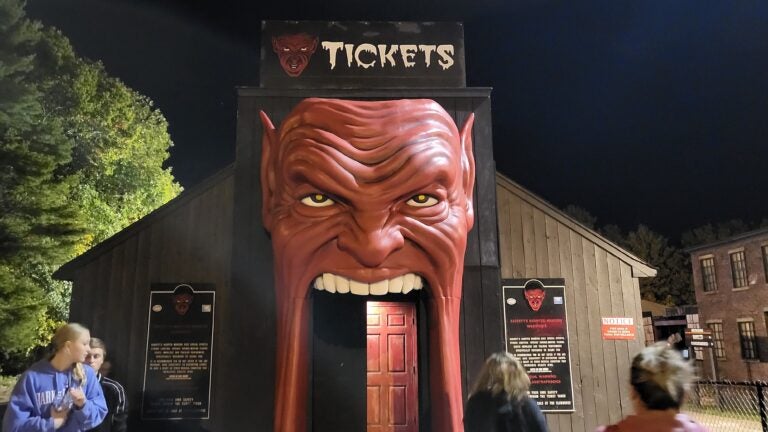 Here’s the scariest haunted house in Mass. (and 5 more you should visit for fun)