A Cambridge restaurant received a wonderful and, perhaps, unusual gift this week: a skeleton arm.

Jason Doo, owner of Wusong Road, a tiki bar at 112 Mt. Auburn St. in Harvard Square, posted a plea to the restaurant’s Instagram last week, calling on the public to help him get back a skeleton forearm that was stolen from the restaurant’s large, spooky Halloween display.

Sharing surveillance videos and screenshots of the suspects allegedly involved in the vandalism, Doo wrote, “Please help us catch the two who destroyed our skeleton” on Oct. 4 at midnight.

“If you know that they dined somewhere please let me know so we can figure out who these two people are and get our arm back!” Doo wrote, adding that he would offer a $100 gift certificate to the restaurant as a reward.

In the following days, the incident was reported on by multiple media outlets, spreading word of the restaurant’s missing limb.

On Monday, Doo posted an update to Wusong Road’s Instagram page, expressing a “HUGE thank you” to a woman named Maria Bennes and her husband for driving to Worcester to donate parts from their own Halloween display, which “sadly fell over and broke in a windstorm.”

Doo said he was grateful for how the community responded to the incident, writing, “We are so thankful for everyone who tried to help us recover our vandalized property!!”

Bennes, who lives in Millbury with her family, told NBC10 Boston that their own spooky skeleton had been knocked over by the strong winds that hit New England last week as a result of Hurricane Ian and “the rib cage shattered.”

When Bennes and her husband heard about the stolen skeleton arm in Cambridge, they knew they could help by donating parts of their own Halloween display.

“We just thought it was a nice way to let it live on,” Bennes told NBC10 Boston, adding, “Is that an oxymoron because it’s a skeleton?”

Wusong Road reportedly thanked the family with a $100 gift certificate, and though they live 45 minutes away, Bennes and her husband are looking forward to coming back, the station reported.

According to NBC10 Boston, the original arm belonging to the restaurant has not yet been recovered. 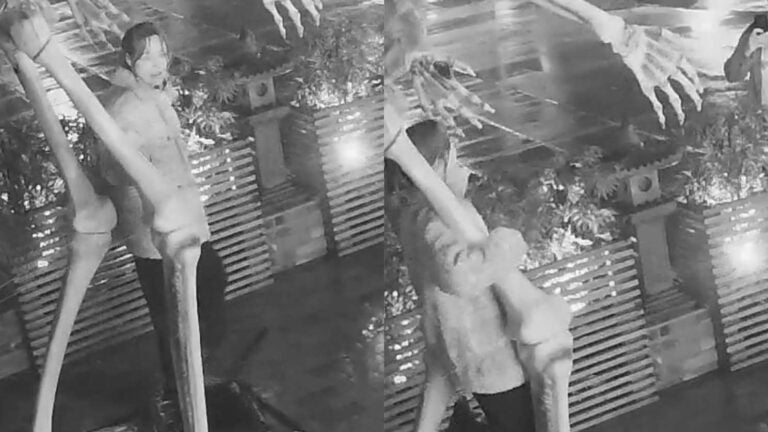 Have you seen this bony arm? Woman caught on camera swiping skeleton arm from Cambridge restaurant