Several portraits of Massachusetts LGBTQ leaders were recently slashed on the Boston Common, the incident coming just days before the “Portraits of Pride” exhibit was set to close.

“Portraits of Pride is a labor of love and a love letter to all the champions and icons of the LGBTQ Community in Boston,” Creative Director Jean Dolin wrote in a statement posted to the exhibit’s Facebook page Friday.

“I have been wrestling with this vandalism for four days, trying to decide whether I should give it any energy and address it,” Dolin wrote. “But I am at a loss for words, saddened, and hurt to my core.”

At least three of the portraits showed signs of vandalism when a Boston Globe reporter visited the site on Thursday morning, the newspaper reported.

Dolin’s statement also mentions state Sen. Julian Cyr, though it was unclear whether Cyr’s portrait had been vandalized, and “Portraits of Pride” did not immediately respond to Boston.com’s request for clarification.

Dolin apologized to exhibit photographer John Huet and the honorees whose portraits were vandalized.

“It is gut wrenching to see you having to endure such hate and violence,” he wrote. “I promise to do better next time, even if that means I have to protect them with my own body. This act of violence on your faces and your bodies is cruel, and I share all the sentiments of pain that you may feel.”

Speaking to the Globe while viewing Chandler’s damaged portrait, Boston resident Eusten Tsao suggested the person responsible may have acted because of the accompanying quotation: “To me, Pride means that we can all live our fullest lives with dignity and respect.”

“Maybe the [person] that did this, doesn’t think [the LGBTQ community] deserves that dignity and respect,” Tsao told the Globe.

Tsao’s wife, Andrea Lee, speculated that the perpetrator might have been drunk.

A Boston police spokesperson said the case has been referred to the department’s civil rights unit, which is investigating. There have been no arrests.

A subsequent “Portraits of Pride” Facebook post added: “This vandalism hurt us but it will not break us!” 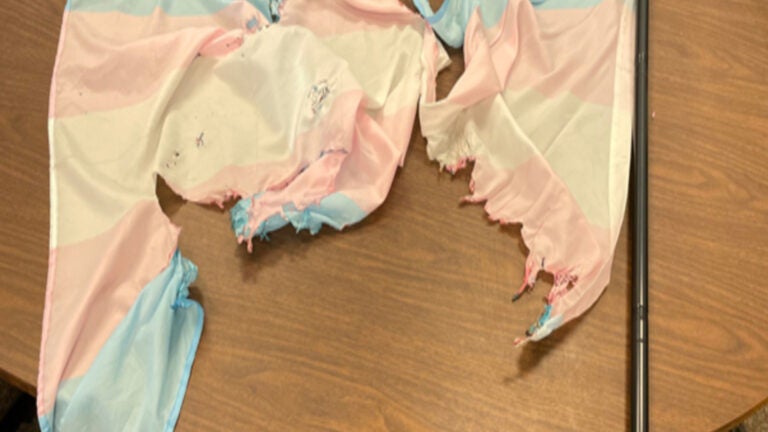