State police have identified the woman killed in a Taunton crash that occurred Monday afternoon as a suspect in a narcotics investigation fled authorities.

Members of a state police narcotics task force were surveilling 34-year-old Hector Bannister-Sanchez as he allegedly picked up drugs from a stash house and drove to the home of a suspected customer in Middleborough, according to a MSP news release.

The Medford resident reportedly took off when he saw troopers approaching, driving across the Middleborough home’s front lawn, striking its front porch steps, and nearly hitting a trooper who was on foot.

A preliminary crash reconstruction by state police determined he was traveling at a high speed and, unable to negotiate a right-bearing curve on Kingman Street, drove into the oncoming lane. Police said Medeiros attempted to steer out of the way, but Bannister-Sanchez’s car collided with her front driver’s side and pushed her car into a utility pole.

Medeiros was taken to Morton Hospital, where she was pronounced dead.

After the crash, Bannister-Sanchez allegedly ran from his car with a backpack, but bystanders and a trooper found him a short distance away and took him into custody. He was taken to Morton Hospital for examination, released to state police, and booked on charges of manslaughter and motor vehicle homicide.

‘She will be missed by thousands’

Medeiros, a Middleborough resident, worked as a loan originator for Fairway Independent Mortgage Corporation. According to her obituary, she is survived by her husband of 31 years, Paul Medeiros; her children, Benjamin and Bethany; and her mother, Irene Silva.

“She will be missed by thousands,” Paul Medeiros told NBC 10.

“Her best days were spent in the kitchen cooking, drinking coffee, and, most importantly, spending quality time with her family and friends,” according to Lori Ann Medeiros’s obituary. “She can best be remembered for her contagious laugh, her love for dancing, and her love for her dog Toby.”

Medeiros was also an active member of the South Shore Women’s Business Network.

“Lori brought her positive energy and her big smile to all our networking events and to her real estate business,” the group wrote in a Facebook post. “She helped connect new members to our network, and we never had a better ambassador. She will be missed by all of us.”

Was there a chase?

A task force member broadcast Bannister-Sanchez’s route as others drove in his direction, without the vehicle in sight and not in active pursuit, state police said.

Witnesses reportedly saw Bannister-Sanchez driving at high speeds through Middleborough, Lakeville, and Taunton. So did Middleborough and Lakeville police officers, who lost sight of the car and didn’t pursue it, according to state police.

Where does the investigation stand?

Bannister-Sanchez was the target of an investigation for trafficking cocaine, fentanyl, and methamphetamine in southeastern Massachusetts, state police said. He is awaiting trial on a previous drug charge in Raynham and was out on bail at the time of the crash, the Taunton Daily Gazette reported.

He is being held without bail following his arraignment in Taunton District Court Tuesday, and his bail on the Raynham case was revoked, according to police.

Later on Monday, the narcotics task force obtained warrants to search properties associated with Bannister-Sanchez. At a Quincy location, investigators found a large amount of money and paperwork in Bannister-Sanchez’s name, police said.

He is also being charged with assault with a dangerous weapon for allegedly attempting to strike the trooper with his car outside the home in Middleborough.

Bannister-Sanchez will be back in court Dec. 8, according to the Taunton Daily Gazette. 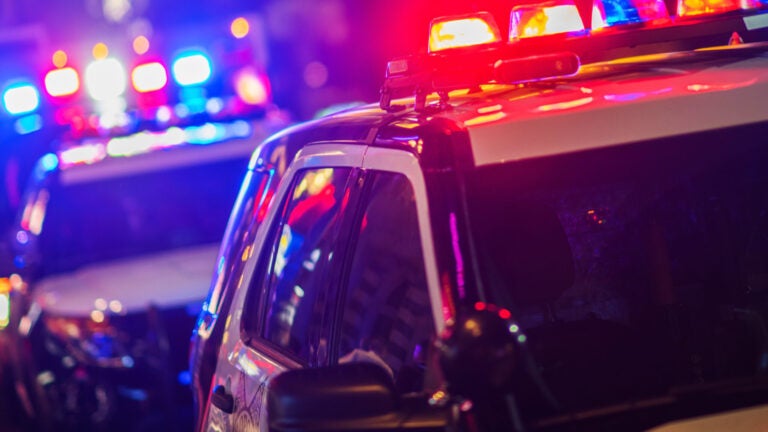