A slew of farm animals will soon be searching for homes as a result of an animal cruelty investigation in Tyngsborough led by the MSPCA’s Law Enforcement division with help from local police.

Nineteen chickens, 15 ducks, five horses, two turkeys, two dogs, and one guinea fowl were surrendered Nov. 1 and are currently being taken care of by the MSPCA at Nevins Farm in Methuen, according to a statement from the MSPCA.

The animals were surrendered after their previous owner, 50-year-old Adevalter Majesky of Tyngsborough, was arrested as a result of authorities investigating a report of an injured pony on his property at 32 Willowdale Road on Oct. 24, Tyngsborough police reported.

Though the officials determined that the pony was not in need of assistance, they “saw in plain sight a thoroughbred horse that was injured and having trouble standing up,” police said.

A veterinarian and an equine specialist from the MSPCA at Nevins Farm evaluated the horse at the scene and soon found that it was suffering from sepsis, as well as several other severe injures, which required it to be humanely euthanized, police said.

Though officials were unable to save the horse in time, they were determined to ensure “a bright future” for the other dozens of animals found on the property.

“It’s unfortunate that we weren’t able to help the horse but the other animals living on the property have a bright future,” Mike Keiley, MSPCA-Angell director of adoption centers and programs, said in a statement.

Keiley anticipates that the chickens, ducks, turkeys, and dogs will be available for adoption in the coming weeks.

“We believe most of the animals will be able to be rehabilitated, and will be available for adoption after treatment,” Keiley said.

“The two dogs are really special,” he continued. “They were living in horse stalls, but they have a great disposition and love being around people. It’s a great example of how resilient animals can be and why we should treasure them.”

Three of the five horses available are miniatures, which are typically about half the height of a standard horse, the MSPCA noted. Horses of these size can be ideal for children, families, and other farm animals, the nonprofit added.

Anyone looking to adopt should apply at mspca.org/nevinsadopt.

See below for some more photos of the animals soon to be available: 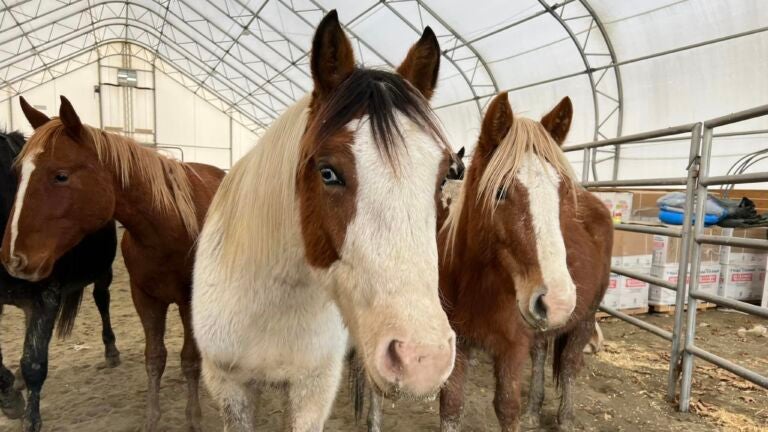 Can you help these 18 horses rescued amid an animal cruelty investigation?