Eight dolphins who were stranded on West Dennis Beach were released back to the ocean Sunday afternoon by the International Fund for Animal Welfare (IFAW).

The dolphins were first sighted off Wellfleet Harbor near the mouth of Duck Creek and reported to IFAW’s hotline just after the 8:12 a.m. high tide.

“The area within Wellfleet’s inner harbor is a world-recognized hotspot for mass stranding events, due to its severe tidal fluctuations and the shallow flats that form a distinctive ‘hook within a hook’ thanks to Cape Cod’s unique geography,” said IFAW professionals.

The IFAW team extracted the animals and transported them to deeper waters for safe release with their mobile dolphin rescue unit — a vehicle that is capable of supporting up to nine marine mammals.

They said they gave the dolphins treatment and supportive care to counter the effects of the trauma, likening the event to the trauma a person might feel after a car accident.

The dolphins were released off West Dennis Beach by 4 p.m. after additional support was required to encourage the pod to swim farther away from shore. One of the dolphins with a declining condition had to be euthanized to avoid further suffering, according to IFAW. 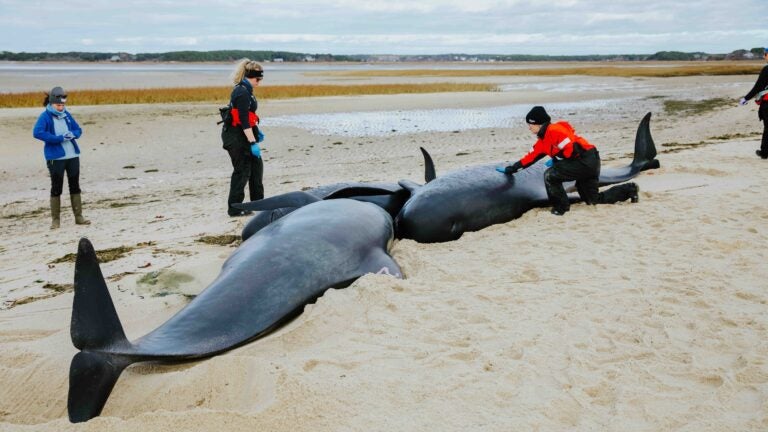