On Monday, just before 11 a.m., a normal morning at the Derby Street Shops in Hingham turned tragic when an SUV driven by Bradley Rein rammed into an Apple store, killing 65-year-old New Jersey resident Kevin Bradley and injuring at least 20 others.

Rein, the 53-year-old driver of the vehicle, was subsequently charged with reckless homicide by motor vehicle, according to Plymouth County District Attorney Tim Cruz’s office. He was arrested Monday night and appeared during an arraignment hearing in Hingham District Court on Tuesday morning.

Rein told police that his foot became stuck on the accelerator pedal while he was driving in the lot, causing his vehicle to slam into the Apple store’s glass wall. A plea of not guilty was entered on his behalf.

While Rein faces future court dates and the Hingham community comes together to heal, those that knew Bradley were left grappling with their grief in the aftermath of the incident.

Friends of Bradley told NBC10 Boston that he was a “great man who took care of his family.”

Vince Ruotolo, of Maywood, New Jersey, expressed his sorrow in a Facebook post Tuesday. Ruotolo says he was with Bradley on the day he died.

“I come to you with a heavy heart,” Ruotolo wrote. “Yesterday Kevin Bradley and I were at Apple in Massachusetts. His life was cut short by a driver. Kevin left behind a wife, kids, and grandkids and good friends. Life is so unfair.”

Bradley was helping with ongoing construction at the store when he died, Apple confirmed in a statement to Boston.com Monday.

Bradley was working for GMS Construction this week, according to a police report obtained by The Boston Globe. A coworker told police that he and Bradley were moving a barrier away from a window when they heard the deafening roar of an engine coming toward them.

“He was suddenly spun around and heard what he thought sounded like an explosion, followed by a loud smash,” the report said, according to the Globe. The coworker later saw Bradley “clearly deceased on the floor.”

“I’m still trying to process this because I don’t want to believe it,” Ewe wrote. “My heart is shattered Pops… Heartbroken, shocked, angry, in utter disbelief amongst other words, is all I can say.” 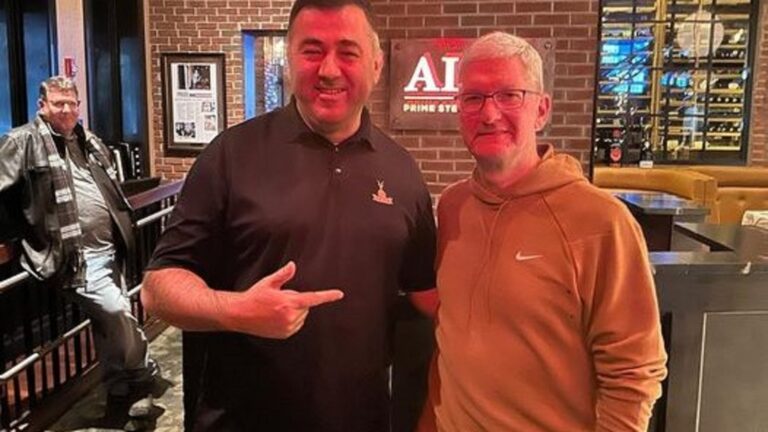