The New England Aquarium is treating more than 150 sea turtles at a special facility after the animals became hypothermic and got stranded on shore.

Cold-stunned sea turtles washing up on Massachusetts beaches is an annual phenomenon, the aquarium said in a release Monday, but the number of turtles that need rescuing has steadily risen over the past few decades.

This year, the turtles began to strand on Cape Cod on Nov. 18. Staff and volunteers from Massachusetts Audubon Wellfleet Bay Wildlife Sanctuary have been combing beaches for turtles experiencing hypothermia so that they can be brought to the aquarium’s Sea Turtle Hospital in Quincy. Hypothermia and an inability to feed can lead to a number of life-threatening conditions for the animals.

Climate change appears to be impacting when cold-stunned turtles are being found on Massachusetts beaches. Researchers believe warmer ocean temperatures delayed the start of the annual stranding season this year.

“In years past, cold-stunned sea turtles would begin to wash ashore in late October. Milder weather means the waters of Cape Cod Bay are staying warmer for a prolonged period of time, which we believe could be a sign of climate change’s impact on the Gulf of Maine,” said Director of Rescue and Rehabilitation Adam Kennedy in a statement.

Staff members use physical examinations, bloodwork, X-rays, and measurements of heart rate and respiratory rate to assess the turtles once they arrive at the aquarium’s facility. The turtles commonly experience dehydration, pneumonia, and shell or bone fractures.

“All of our sea turtle patients receive individualized care based on their condition. Depending on the severity, turtles may need weeks, months, and sometimes more than a year of treatment before they are at a point where we can clear them for release back into the ocean,” said Director of Animal Health Charles Innis in a statement.

The aquarium works with Turtles Fly Too, a nonprofit organization, to transport the animals when more room is needed at the Sea Turtle Hospital. With a growing number of turtles in need of rapid help, those that have been stabilized are sometimes brought to other facilities where they can receive further care.

Volunteer pilots with Turtles Fly Too began their transport flights on Sunday. They flew more than 40 turtles to the South Carolina Aquarium, the Georgia Sea Turtle Center, and the Atlantic Marine Conservation Society in New York. On top of that, 12 turtles were driven to Mystic Aquarium in Connecticut last week. Those that remain in critical condition at the New England Aquarium facility will complete their rehab there before being released next summer.

Although the number of cold-stunned sea turtles changes from year to year, researchers are seeing a gradual uptick. In 2000, only about 50 cold-stunned turtles were found in Massachusetts, the aquarium said. More than 700 were found in 2021. On average, staff members treat about 300 turtles each year. Most of the turtles that arrive at the aquarium’s facility are successfully rehabilitated and released back into the ocean. 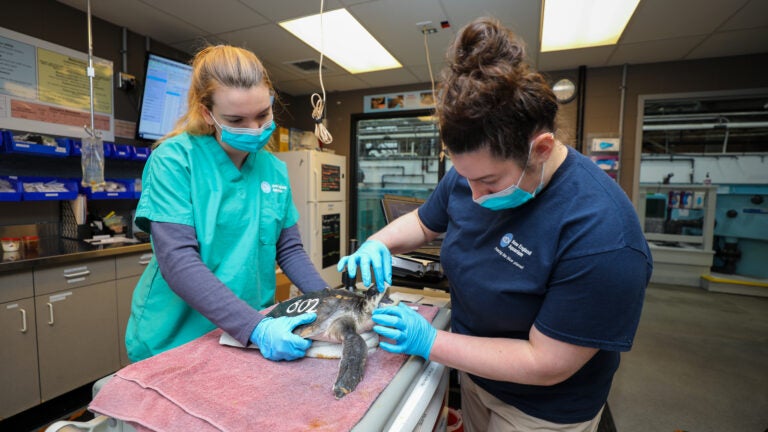