WALDOBORO, Maine — Clam diggers visit Elaine and Ralph Johnston’s hardware store in the coastal town of Waldoboro for shellfish rakes and waders. Since Russia invaded Ukraine, they have also been able to pick up a more unusual item: the Ukrainian flag, sold for $15.99.

Unlike in cities like New York and Chicago, where symbols of Ukrainian pride in part reflect a large diaspora community, there are few people of Ukrainian heritage in Maine. But the flag’s widespread presence in the state shows another kind of solidarity. Mainers like to say theirs is a flinty spirit, born of enduring harsh winters and an equally harsh economy.

“People over there are doing a good job fighting for their land and their survival, and we in Maine, we like that,” Elaine Johnston said. “We sell flags to people who feel the way we do.”

In Skowhegan, a town in Maine’s rural interior, Tom McCarthy, a contractor who also runs a Christmas wreath business, called up a flag maker whose workshop is down the road.

“I said, ‘Make me the biggest Ukrainian flag you can,’” McCarthy said. “He did.”

McCarthy has no familial connection to Ukraine, although he once hosted an exchange student from neighboring Belarus, which is governed by an authoritarian leader aligned with President Vladimir Putin of Russia.

“The majority of people in Maine know what struggle is, from the pulp woods to the potato fields, to blueberry patches to lobster waters — we know that one day you have something and another day you don’t,” McCarthy said. “The people of Ukraine, they’re survivors, too, and putting up their flag, well, that’s a small token. But it’s something I could do.”

Bill Swain, the flag maker whom McCarthy contacted, said he had needed to Google what the Ukrainian flag looked like when his neighbor called. Swain typically makes drapes for hotels and flags decorated with a pine tree and star, the old Maine state emblem.

The particular shade of blue on the top half of the Ukrainian flag had to be ordered specially, he said. It is a rare azure (Pantone 2935, in the parlance of the company considered a color authority), not the navy blue (Pantone 281) of the Norwegian and Liberian flags or the royal blue (Pantone 293) of the Dutch and Slovenian flags.

Swain ordered a lot of cloth in Pantone 2935. McCarthy, who bought a 5-by-8-foot flag from him, told him the Ukrainian symbol would prove popular.

Since making his first Ukrainian flag in April, Swain has sold more than 2,000 of them, a faster pace of sales than for his American and Maine flags. Orders come in from across the country — a reminder that flying the Ukrainian flag is not just a Maine phenomenon — and he donates a quarter of the proceeds to a charity working in Ukraine. The oldest flag maker at his company is 73. Swain attaches the grommets himself.

“When you make a flag, you want to do it right,” Swain said. “When you see flags that are printed, not sewn like ours, you can tell right away that they’re not going to last.”

Maine is politically divided between its southern coast and a vast interior, and it is one of two states where districts cast their electoral college votes separately. In the 2020 presidential election, President Joe Biden took the coast and former President Donald Trump the interior.

The affinity for Ukraine, though, is bipartisan.

“Ukraine is not a red or blue issue, it’s a blue and yellow issue,” said McCarthy, who is a Vietnam War-era veteran.

Kimberly Richards, who lives in Friendship, Maine, is married to a third-generation lobsterman and paints white cedar buoys in custom color combinations. Commercial lobstermen use bands of colors to distinguish the buoys floating above their traps. This year, she has been painting a lot of yellow and blue, buying the blue paint from the Johnstons’ hardware store in Waldoboro.

“Pretty much everybody in Maine, we understand the injustice that’s going on over there and we want to show our support to the Ukrainian people,” Richards said.

The family of Elaine Johnston, the hardware store owner, came to the United States from Finland, which was invaded by the Soviet Union early in World War II. Her grandmother arrived in Maine as a little girl, trading one snowy land for another.

“We know how it feels for the Ukrainians, with Putin acting like that,” she said.

Waves of Finns, along with Scots and Swedes, came to Maine to work the granite quarries. Other immigrants came to haul timber and feed paper mills on land that has been home to the Wabanaki, a confederation of Indigenous peoples.

Still, only 4% of Maine’s current population is foreign born, although immigrants from Africa and Asia have arrived in the state in recent years, many driven from home by conflict.

Muhidin Libah, an ethnic Bantu from Somalia, arrived in Lewiston, Maine, in 2005 after having won a visa lottery spot. He helps the state’s roughly 2,000 Bantus access social services and apply their traditional agricultural acumen to a colder climate. (A minority population in Somalia, Bantus were once enslaved by other ethnic groups.)

Libah sees Ukrainian flags flying from farmhouses as he drives around rural Maine looking for land that can be cultivated by Bantus.

“The Ukrainian flags in yards in Maine, it is nice to see that support,” Libah said.

Still, he noted that while many Ukrainians found refuge outside their country shortly after the invasion, he spent 20 years in a refugee camp in Kenya before winning his chance to emigrate to the United States.

“I think part of it comes down to people associating with the whiteness of Ukrainians,” Libah said. “You want to help someone in trouble who looks like you. Will they feel the same for an Afghan refugee or a Bantu refugee?”

Compared with the displaced of Africa, Asia and the Middle East, Ukrainian refugees have been welcomed more quickly and with wider arms in Europe and the United States.

Oleg Opalnyk, a Ukrainian native, came to Maine in 2002 and now owns a contracting and real estate business. There are only a few dozen Ukrainians in the state, he estimated. When Russia invaded Ukraine, he yearned to do something.

“At first, I wanted to go to Ukraine and fight,” he said, “but I realized I could help people more from here than from there.”

Opalnyk has so far supported 24 Ukrainians who have arrived in Maine under a Department of Homeland Security program that allows for some 100,000 Ukrainians to stay in the United States for up to two years if they have a financial sponsor. Opalnyk is also sponsoring another 18 Ukrainians who will arrive in Maine in the coming weeks, he said.

Only one of the 24 Ukrainians who have arrived so far has gotten permission to work, Opalnyk said, making a sustained welcome from the community even more important. Residents of the cities of Lewiston and Auburn, where the Ukrainians have settled in apartments provided by Opalnyk, have donated clothes, furniture and food.

“They see the Ukrainian flag all over here, on cars and on buildings, and they feel the good of the people of Maine,” Opalnyk said, referring to the new arrivals. “Americans, and Mainers especially, they have sensitive hearts to people who are suffering.” 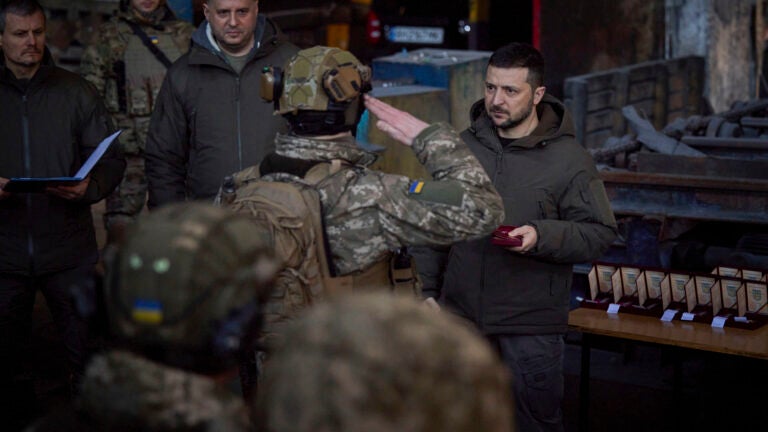