Many people filing out of work in the Financial District joined in, including Megan Fisher, 23, of Boston.

“Me and my coworkers left work a little early to come,” she said. “I don’t know if other leaders would have gotten this big of a scene. Whether you’re a royalist or just someone that’s interested in the royals in general, it’s like a celeb sighting!”

Prince William and Kate are in town for three days, culminating in a star-studded awards ceremony on Friday for Prince William’s Earthshot Prize. The global event will honor groundbreaking environmental initiatives. Laura Scott, 39, of Charlestown, said she appreciates the work that the British monarchs do for the planet.

“It’s great for them to be here, for them to highlight the need for improvements to the environment. We need to save our planet.”

“I loved all of the speeches,” he said. “I think that Boston is becoming the greatest and greenest city that it could be.”

Both Scott and Ricketts Johnson waited over four hours to see the royals — with Scott decked out in a Red Sox poncho and cap.

“I’m so excited they’re here,” she said. “I think William and Kate are great role models for young people like me to try and change the world.”

Wind and rain didn’t stop the gathered crowds. Prince William thanked the “hardy Bostonians” for enduring the substandard weather. Daniel Dodson, a student at Sattler College, braved the elements in a head-to-toe poncho.

“I’m here more out of curiosity than anything else,” he said. “And [the poncho] works pretty well for me. Keeps it all dry!”

For Stacy Griffin, of Marblehead, the event was a family affair — she brought 12 relatives to watch Prince William speak. “I made my kids come here, and said ‘We’re going to see a prince and princess!’” she said.

Griffin took her family to London last summer during the Queen’s Platinum Jubilee hoping for a royal sighting.

“We went on a whole tour of the UK, and how funny is it that we see them here and not in London?”

Griffin said she hopes Tuesday evening won’t be her only time seeing William and Kate while they are in Boston.

“I’m gonna be stalking them over the next three days,” she joked. “I’m gonna sit outside MGM on Friday before the Earthshot prize.”

After the event concluded, many hopefuls gathered around City Hall hoping to watch the royals exit. Annamaria Poullas, a student at Bridgewater State University, missed the speeches by minutes — but was excited to be at City Hall after it was lit up green.

“Either way it’s a once-in-a-lifetime experience!” 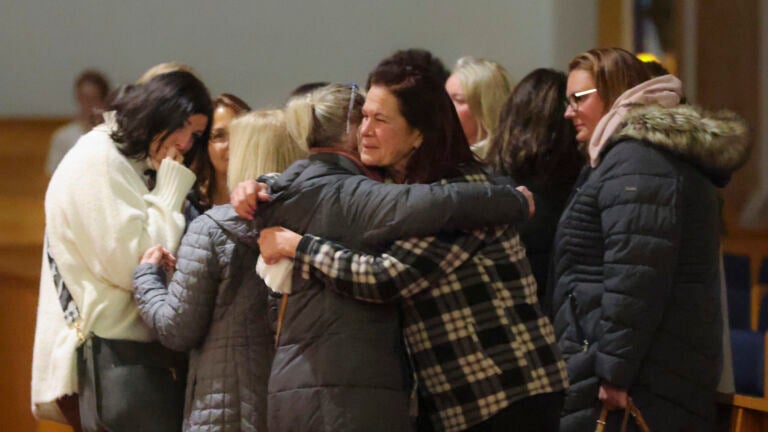