NEW LONDON, N.H. — Over the last two years, applications at Colby-Sawyer College, a small, quaint assemblage of red brick buildings surrounded by three mountains, fell about 10%, hurt by the pandemic and by competition from less expensive public colleges across the Northeast.

Against that backdrop, Colby-Sawyer made what looks like a radical decision. It hacked the official price of tuition for the 2023-24 school year to $17,500, from about $46,000, a drop of 62%. Its published tuition is now only slightly higher than the cost of attending regional public universities.

Colby-Sawyer has joined a growing number of small, private colleges in what’s called the tuition reset, which overhauls prices to reflect what most students actually pay after discounting through need-based and merit financial aid.

The reset is part marketing move and part reality check. It is frank recognition among some lesser-known colleges that their prices are something of a feint. They are high in part to mimic the price tag of the most elite colleges and universities — suggesting that this is an education worth paying for — but in reality, the prices are not based in fact. At Colby-Sawyer, every student gets a discount.

“I don’t want to call it a game, because it’s not a game,” said Susan D. Stuebner, the president of Colby-Sawyer. “But this phenomenon in higher education of a high sticker price, high discount is so confusing to families.”

Many potential applicants, she said, balked at the sticker price and did not investigate further.

Many private colleges are feeling pressure to fill their classes. They are competing for a dwindling number of college-age students and face a growing skepticism about whether the degree — and its debt — is worth it.

Nearly one-third of parents and students believe that a college education is overpriced compared with its value, according to a recent Sallie Mae and Ipsos study. The same study found that 81% of families had crossed a school off their list at some point because of its high cost.

“The conversation nationally has really become, why is the price of college so high?” Stuebner said. “How many families are we not in conversation with because they see the sticker price and say, ‘Not for me’?”

The resistance to tuition increases is a reversal from 20 years ago, when some colleges found that raising prices goosed applications, known as the Chivas Regal effect, as families equated price with quality. Families also liked the prestige of receiving scholarships. Colleges got into the habit of raising prices every year and then using financial or merit aid to discount the price for students who could not afford full fare or for high achievers and athletes whom they wanted to recruit.

There is no definitive list of colleges that have pared back tuition. And it can be hard for even the most sophisticated consumer to distinguish between a marketing ploy and a real tuition reduction. Often, it is a combination.

In the last two years, several private schools have announced a tuition reset, including Lasell University in Newton, Massachusetts; Washington & Jefferson in Washington, Pennsylvania; and Roanoke College in Salem, Virginia.

Last year, Houghton University in Houghton, New York, declared itself the best-priced Christian college in the nation with its tuition cut.

Fairleigh Dickinson, which has two campuses in New Jersey, announced a tuition cut of about 25%, effective last year. Its president, Christopher A. Capuano, explained in an opinion essay in The Star-Ledger of Newark that the university was reacting in part to a decline in enrollment during the pandemic and to concerns over student loan debt. But marketing also played a role.

“Unfortunately, many students don’t realize that the tuition they pay will likely be far lower than the published rate when researching the price of college and are deterred from even applying,” he wrote.

Public universities are also getting into the act. Vermont State University set its in-state tuition at $9,999, an average drop of 15% for colleges in the system, and it cut prices for out-of-state students by 33%. Many state university systems have frozen tuition, including in New York, Virginia, Nebraska, Wisconsin, South Carolina and Tennessee.

Purdue University has held tuition and fees flat since 2012.

At private colleges, most students do not pay the list price. In a study from the National Association of College and University Business Officers, 359 private nonprofit colleges and universities reported that a vast majority — 82.5% — of undergraduates received grant aid in the 2021-22 school year. On average, the awards were the highest ever, covering 60.7% of published tuition and fees.

“We’re bringing the published tuition much closer to reality,” said Dan Parish, the head of college advancement at Colby-Sawyer.

Kim Schusler, a senior sales trainer for an electronic health records company, lives near Colby-Sawyer, in Bradford, New Hampshire, with her husband, who is a bus driver, and their two sons.

But the school was “not even a blip on our radar because it was just so expensive,” she said. “This wasn’t med school. They were pricing themselves out of the market, for sure.”

Schusler’s older son, Cohl, is now a junior at Colby-Sawyer. He applied after his guidance counselor at Kearsarge Regional High School told him that, with his good grades, he could qualify for a number of scholarships, including one for being a local resident, that would significantly reduce his costs. The scholarship for local residents was a kind of test run for the tuition reset.

Before winning those scholarships, Cohl Schusler was looking at several less expensive colleges, including a public university in Florida, his mother said.

He still had to take out federal loans, and his balance for the spring semester is still a bit of a stretch for the family.

“This year, I can’t afford a loan because the interest rates are so high, so I am going to try to pay the $5,300 balance out of pocket,” Kim Schusler said.

Cost is not the only consideration, as the Schusler family illustrates. The younger son, now a senior in high school, is looking at a different private college because it offers the cybersecurity program he wants. “I’m hoping they will also reduce tuition,” Kim Schusler said. “That would be such a big help for him. We’re in that group of people who can’t afford to go to college, yet we know that you need to go to college to make it in this world.”

Analysts say tuition resets are unlikely to extend to the smaller subset of more competitive schools, ones with robust endowments and bigger applicant pools. Colleges like Amherst and Swarthmore can cover the full cost of attendance for low-income students, and they rely on wealthy families willing to pay full freight to help fill the gap.

“What you see is a gigantic dichotomy between the very elite schools” — both public and private — “and the other schools, which are accepting almost every student that applied and hoping they can get enough of them to say yes,” said Lucie Lapovsky, a consultant on tuition resets who worked with Colby-Sawyer.

Selective schools that aspire to be at the very top will likely not reset tuition. “Skidmore College is not going to do this, and they don’t need to,” said Sandy Baum, a senior fellow at the Urban Institute who studies higher education and finance. “Mount Holyoke has too much of a reputation to do that.”

At Colby-Sawyer, the hardest sell was probably to current students, said Destiny Cruz, a senior and the president of the school’s student government association, who had to explain the change to her fellow students.

They were disappointed when they realized that they would not gain from the tuition reset; their net price would remain the same. Cruz, who wants to be a lawyer, was paying $9,607 a year after grants and loans, and she will continue to pay that amount with the reset.

“It was the talk of the campus for about three days,” she said. “Then, I’m not going to lie, it went back to what we were having for lunch.”

The reset, so far, has not been a panacea. The college’s announcement, which generated buzz on social media and in news coverage, led to an immediate surge in applications when it was announced after Labor Day — an increase of 75% over the same time last year, according to college officials.

Since then, visits and inquiries continue to be “way up,” but the number of applications has returned to normal levels, said Parish, the head of college advancement.

He anticipates that the true impact on applications will not be felt until the next admissions cycle. “I’d be happier for us if they were ahead, but we still have some time to go to see where it’s going to land,” Parish said.

Colby-Sawyer faces some risk in cutting tuition, Lapovsky said. Families may look down on the new price — the dreaded Chivas Regal effect. Or they may want the bragging rights that accompany a large scholarship, which a lower tuition renders mathematically impossible.

But the bitter truth, she added, is that “colleges are unable to fill up their classes at the price they’re charging.” 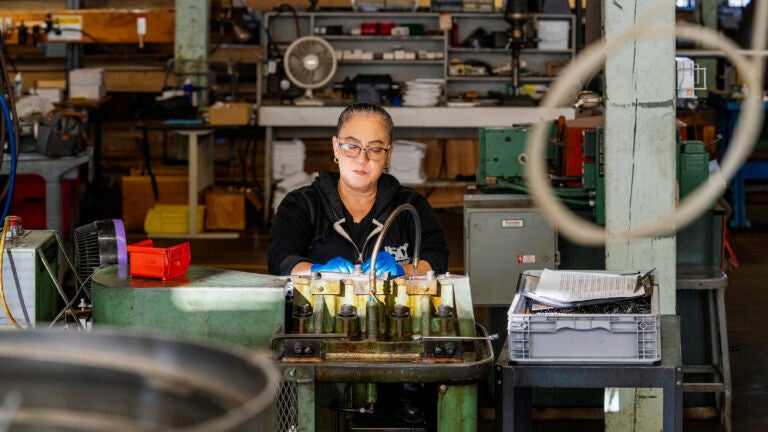 Wave of job-switching has employers on a training treadmill