The COVID-19 pandemic has led people to turn to local news sources more than ever before over the past few weeks. But even with that, newspapers in New England, and elsewhere, are continuing to make cuts.

Losses in ad revenue as a result of the current crisis are already threatening small newspapers and news sources around Boston and throughout the region.

“The situation with the coronavirus has led to more and more advertising defections because advertisers, number one, don’t really want their messages and their brands to be associated with coronavirus coverage, and, two, because of the total cancellation of arts and cultural events, because of the shut down of movie theaters, a tremendous amount of advertising has just vanished,” John Carroll, a media analyst for NPR’s “Here & Now,” recently told Boston.com. “So we’ve seen, especially alternative newspapers, which rely on events advertising to a significant degree, just unable to continue publishing.”

For Scout Magazines, which publishes Scout Somerville and Scout Cambridge, this has meant appealing to readers for donations, with the promise of a family photo “taken from a safe distance” in return — which they’ve named #TheFrontStepsProject.

“Scout is in trouble, and we want to continue doing the important work of documenting the community, but we need your help,” a post on the magazines’ website says.

Scout is in trouble, and we want to continue doing the important work of documenting the community, but we need your help. If you are able to give us the gift of a donation, we would love to return the favor with a family photo taken from a safe distance! https://t.co/iLex18tZ79 pic.twitter.com/FquaKs6eek

DigBoston, a free, independent alt-weekly, announced on March 16 that it was halting its print edition. Staff there also appealed to readers for help.

“A significant amount of DigBoston’s revenue—advertising, ticketing, events—is directly tied to people getting together in groups. The situation at hand has eliminated most of this income all at once,” staff wrote at the time.

Many other Boston-area and New England publications have alerted their readers to the dire situation they find themselves in, and have also announced layoffs.

One of those layoffs was of well-known reporter and columnist Jim Hand at The Sun Chronicle in Attleboro. He worked at the paper for 35 years.

“Thanks to the economic impact of the #coronavirus, today was my last day [at] The Sun Chronicle after 35 years on the job,” he wrote on Twitter. “And I was just getting the hang of it too.”

Thanks to the economic impact of the #coronavirus, today was my last day The Sun Chronicle after 35 years on the job. And I was just getting the hang of it too. #mapoli

“You represent the gold standard of local journalism,” Healey said on Twitter. “You’ve made us all better. I know you will land on your feet soon.”

Hand’s daughter, Karissa Hand, honored her father’s career in a series of tweets the day after his time at the Chronicle ended. She called him “the most humble person I know.”

“I know many are experiencing similar hardships right now,” she wrote. “But this goes far beyond the loss of a job. It’s a crushing blow to local journalism and our community at a time when trusted, localized reporting is so critical to our democracy and our ability to survive this pandemic.”

The Chronicle’s editor, Craig Borges, told WPRI that the round of layoffs hit every department at the newspaper.

In a letter to the community published on March 16, Borges said the paper, as well as its sister paper, The Foxboro Reporter, would continue to print “as long as it is feasible.”

“Many of our advertisers — big and small — have been forced to put their ads on hold because of the pandemic,” he wrote. “Restaurants, bars and gyms, for example, have been especially hard hit. The economic fallout of the pandemic will surely affect us all.”

Farther west, the Daily Hampshire Gazette, the Greenfield Recorder, and the Athol Daily News all suffered a round of layoffs, announced by publisher Michael Moses last Tuesday.

Moses noted that just two weeks ago “it was business as usual,” but the crisis quickly changed that. He said he hopes the staffing cuts, reductions in hours, and drops in pay for managers are only temporary.

“Despite this setback, we remain as committed as ever to our communities, our readers and to our ongoing mission of preserving local journalism,” he said.

The Concord Monitor, serving New Hampshire’s capital city, also announced a round of layoffs, plus a drop in hours for other employees. Managers also suffered a drop in pay, according to editor Steve Leone.

“Some of the changes will come at our printing facility in Penacook,” he wrote in a letter to readers. “In the newsroom, we’ll have a smaller staff as we begin producing some news pages in coordination with the Valley News, our sister publication in West Lebanon.

“While these staffing changes are necessary today, we hope they are only temporary. At this point, there’s just no way to know.”

In Vermont, Seven Days, an alternative, independent newspaper headquartered in Burlington, laid off seven staff members, representing nearly 15 percent of the paper’s overall staff. The layoffs included one worker from each department, and the paper hopes to rehire them in 10 weeks.

Seven Days also spoke with Steve Pappas, publisher of the Rutland Herald and the Barre-Montpelier Times Argus, which serves the state’s capital, after he and George “Scoop” Sample, who owns the papers, decided to lay off 20 of the papers’ 42 employees and cut print production from five days a week to three. The hope was that these changes are only temporary, too.

Gannett, the large national corporation that owns USA Today and hundreds of local papers throughout the country — including the Cape Cod Times, the Patriot Ledger, and other small newspapers in Massachusetts — announced Monday that it will have workers making more than $38,000 take an unpaid week off during each of the next three months. CEO Paul Bascobert also said he won’t be taking a salary, and company executives will lose 25 percent of their pay.

In a column published last Thursday in The Washington Post, Margaret Sullivan argued that local journalism should receive federal funding to help with the crisis caused by the pandemic.

“The current advertising decline comes at a time when news organizations are already in deep trouble, mostly because of the precipitous decline in advertising revenue, which has migrated to the largest technology platforms, such as Facebook and Google, for many years,” Sullivan wrote, noting that some places don’t have local news sources anymore as, over the last 15 years, over 2,000 newspapers have folded.

“News-industry experts have been predicting for years that a recession or severe economic downturn would deliver a death blow to these already troubled businesses,” she wrote. “And now a public-health crisis has come along to threaten exactly that.”

Carroll, who is also senior news analyst at 90.9 WBUR, called it a “difficult situation.”

“It’s a difficult situation because people are relying more and more on the news media, but the advertising isn’t following the eyeballs,” he said. “So there are newspapers that are strong enough to survive, but there’s a whole group of newspapers that are already in peril, and especially if they’re owned by hedge funds, which a tremendous number of newspapers are — they’re sort of in double jeopardy because the hedge funds have no patience for a loss of revenue.”

The uncertainty is also part of the difficulty of the situation, according to Carroll. There isn’t a timeframe for media organizations to cling to with a defined terminus.

“The corporate world hates uncertainty, you see that in the stock market every day, so the uncertainty baked into the situation that we have now, it’s going to be one of the biggest issues for any number of publications,” he said. 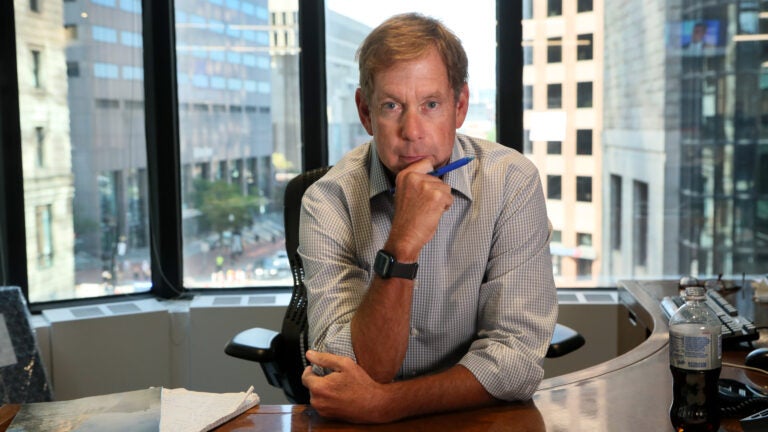 Brian McGrory to step down as Globe editor