There have been a lot more empty seats at President Donald Trump’s daily news briefings – but no, news organizations aren’t boycotting the events in protest or attempting to silence him, despite what he suggested at a briefing this week.

Instead, something else is afoot: Reporters are keeping their distance because they are concerned about the health risks at a time when many consider the president’s evening news conferences to have become increasingly less newsworthy.

The decision by such outlets as The Washington Post, The New York Times and CNBC to stay away may be fundamentally changing the character of the briefings. With veteran White House reporters on the sidelines, the president has primarily engaged with TV journalists, including one from a small, far-right conservative news channel that rarely gets such a prominent stage.

The Post, The Times and CNBC stopped sending reporters to the briefings – which have taken place in the Rose Garden as well as the more cramped confines of the West Wing’s James S. Brady Press Briefing Room – after two White House correspondents were suspected of having contracted covid-19, the disease caused by the virus. (One of the reporters, who hasn’t been publicly identified, tested negative on Tuesday, according to ABC News’ Jonathan Karl, the president of the White House Correspondents Association).

Times Executive Editor Dean Baquet said his organization has withdrawn its reporters from the briefings, both because of health considerations and the uncertain newsworthiness. Reporters continue to monitor them on TV and report anything worthwhile.

“Nowadays, it seems they make little news,” he said. “We, of course, reserve the right to show them live [via streaming] if we believe they will actually make news. But that hasn’t happened in quite some time.”

However, Trump’s near-daily briefings have been widely criticized for the amount of misinformation he has provided about federal efforts to combat the coronavirus outbreak. Among other things, Trump has overstated the availability of testing, touted untested drug regimens as potential cures and spent considerable time criticizing reporters for asking questions he didn’t like.

The suggestion that he has turned the briefings into quasi-campaign rallies in service of his reelection effort have prompted some commentators to urge cable networks to stop showing them live and unfiltered.

There’s an ironic subtext to media organizations deciding the briefings aren’t newsworthy enough to bother with: Before the pandemic, journalists had complained bitterly that the White House had gone a full year without holding the news briefings that once had been a daily ritual.

Trump on Sunday implied that news organizations, including CNN and The Post, are attempting to silence him. “When they don’t want the president of the United States to have a voice, you are not talking about democracy any longer. Any longer,” he said.

In fact, CNN says it plans to continue covering the briefings, as do MSNBC and Fox News.

The Post has stopped sending reporters to the briefings and skipped its rotation in the press pool, which provides reports to all reporters, when Trump traveled to Norfolk, Virginia, over the weekend. Both moves were prompted by health concerns.

The news organization is continuing to report on the briefings, and is streaming them on its website, said Executive Editor Martin Baron. However, he said, “we have to keep in mind our reporters’ health and those of our colleagues at other media outlets. Our reporters were in close proximity to another organization’s White House reporter who was showing symptoms of the coronavirus.”

Baron said the Post would welcome alternatives to the in-person briefings, such as video conferences. Former White House press secretary Sean Spicer introduced video questions from reporters across the country at briefings in the early days of Trump’s presidency, but the practice was abandoned not longer after it started.

Baron also said the White House could create a permanent outdoor space to permit more distance among reporters, with microphones that could be cleaned rather than passed around – a potentially risky practice that is used now.

Out of concern for social-distancing guidelines, the White House Correspondents Association, which organizes press-room operations, first reduced the number of briefing-room seats available to reporters from 49 to 25 in mid-March, with no standing in the aisles permitted. The organization further scaled back the seating last week, with 14 available.

The smaller sessions have boosted the relative prominence of news organizations that choose to send reporters. Among them is One America News Network, a cable TV outfit that consistently favors Trump in its reporting and sometimes traffics in baseless conspiracy theories.

In a previous session, Rion gave Trump a chance to dunk on those who have criticized his use of the term “Chinese virus” to refer to the disease. “Mr. President, do you consider the term ‘Chinese food’ to be racist because it is food that originated from China?” she asked, seemingly rhetorically. “I don’t think that’s racist at all,” he responded. She went on to claim that “major left-wing media . . . have teamed up with Chinese communist party narratives.”

Trump replied by promoting his job performances and criticizing the news media: “I don’t think anybody has done as much as I have done in three years. This administration has done a great job. But the press is very dishonest.” 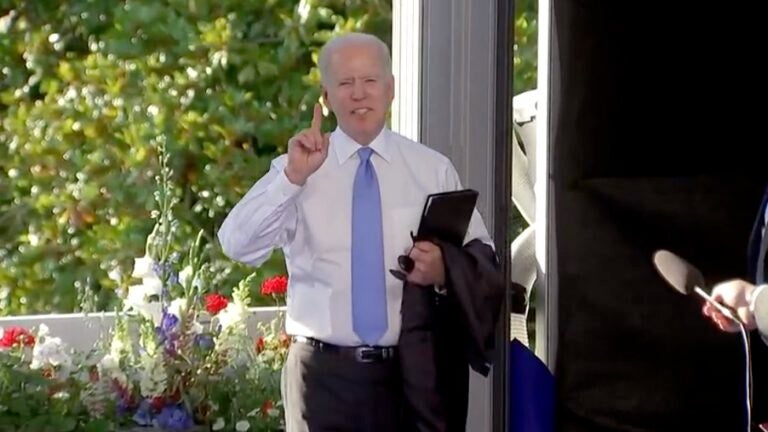