A White House official ordered a CNN reporter to give up her front-row seat and move to the back of the press room before President Donald Trump’s briefing on Friday, in what appears to be another attempt by Trump to punish a network he calls “fake news.”

The reporter, CNN White House correspondent Kaitlan Collins, refused to move, as did a second reporter whose seat in the rear of the room she was ordered to take. The official then suggested the matter would be resolved by the Secret Service, though no action was taken, according to several people involved in the episode.

Network reporters, including those from CNN, have assigned seats at the front of the briefing room, under a plan managed by the White House Correspondents’ Association (WHCA) and agreed to by White House officials last month. The agreement reduced the number of reporters in the briefing room to meet social-distancing requirements.

The major TV networks, including CNN, Fox News and NBC, have seats in the front rows, which makes their reporters more visible in news clips of the briefings. A reassignment to the rear would make a reporter less prominent, though only marginally.

The WHCA has managed press access to the room for decades, with few objections from the White House. But the White House has now unilaterally sought to assert its authority over reporters twice in the past month.

Over the WHCA’s objections and in violation of social-distance measures, the president earlier this month gave preferential access to a reporter from the One America News Network. The small cable network has a history of favoring Trump in its reporting.

The White House’s latest effort to reorder the briefing room came after a brief verbal clash between Collins and Trump during the televised briefing on Thursday.

The run-in occurred after Trump dismissed a question from another reporter about North Korean dictator Kim Jong Un’s health, saying it was based on an “incorrect” report from CNN earlier in the week. As Collins tried to ask a follow-up question, Trump interrupted her.

“No, that’s enough,” he said, adding. “The problem is, you don’t write the truth.” Collins continued to press, but Trump replied, “No, not CNN. I told you, CNN is fake news. Don’t talk to me.”

On Friday, just before the start of the president’s briefing, Collins was ordered to swap seats with Chris Johnson, a reporter for the Washington Blade. Johnson was in the sixth row of the seven-row seating area; Collins was in the front row.

The White House declined to comment on why it sought the change.

Collins and Johnson refused to move, citing their seat assignments. The briefing then went ahead as planned, though Trump declined to take any questions from reporters, and walked off after only 22 minutes, making it the shortest briefing since regular sessions began last month.

Collins described the incident briefly in a tweet on Friday: “Tonight the White House tried to have me, and only me, swap seats with another reporter several rows back. We both refused to move from our seats that were assigned well in advance.” She did not respond to a request for comment.

Johnson, who was acting as the pool reporter for the day, described his involvement in one of his pool dispatches: “Earlier today before the briefing, a White House official instructed the print pooler [Johnson] to take CNN’s seat in the briefing room because the seating would be swapped for the briefing. Given the seating assignment is under the jurisdiction of the White House Correspondents’ Association, not the White House, pooler refused to move.

“The White House official then informed the print pooler swapping wasn’t an option and the Secret Service was involved. Again, pooler refused to move, citing guidance from the WHCA. The briefing proceeded with both CNN and print pooler sitting in their respective assigned seats.”

The WHCA assigns seats to news organizations based on such criteria as its size of audience or readership, its record of handling pool assignments on behalf of other news organizations and the frequency with which its reporters travel with the president. “The WHCA has a committee that determines seating in keeping with our mission of ensuring maximum access and accountability on behalf of the American people,” WHCA president Jonathan Karl said in a statement.

In an interview, Karl, an ABC News correspondent, said Saturday that no protests of the White House’s actions are planned. “We acted as we did – [we] refused to go along,” he said. “And we’ll continue to do what we have done for decades.”

CNN has long been a target of Trump’s reprisals. In late 2018, Trump banned Jim Acosta, its chief White House correspondent, but a federal court, acting on a CNN lawsuit, said the president’s action was unconstitutional and ordered Acosta reinstated. Trump has also taken action against Collins, banning her from an open press event in 2018 after objecting to questions she asked earlier in the day.

In comments on CNN last night, Acosta called the White House’s tactics on the seating issue “Soviet-style [and] totalitarian-like.” He said it took “almost an act of civil disobedience [by Collins and Johnson] to foil the White House’s plans.” 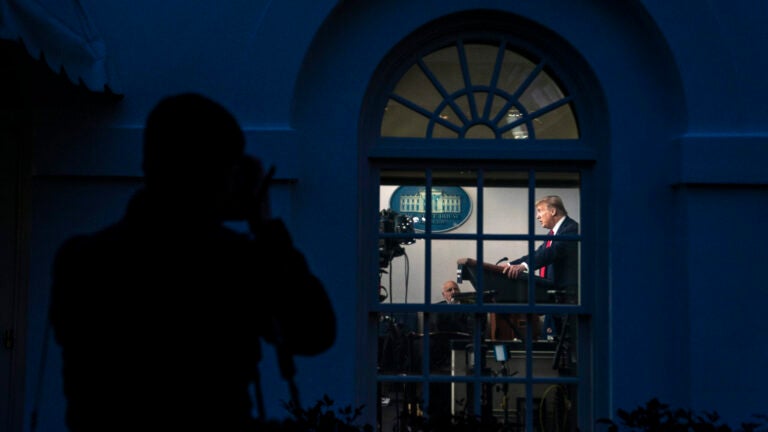 Home alone at the White House: A sour president, with TV his constant companion