Fox News host Tucker Carlson devoted a lengthy portion of his show Tuesday night to attacking New York Times reporter Taylor Lorenz over her accounts of facing online harassment, claiming that in fact she has “one of the best lives in the country.”

After both she and the newspaper spoke out, with the Times calling his segment “calculated and cruel,” he returned to the airwaves Wednesday to continue lambasting Lorenz. He labeled her a “deeply unhappy narcissist,” denied that she faces online abuse and allowed a guest to baselessly accuse her of “harassing kids and teenagers.”

His segment is the latest instance of Carlson singling out a reporter – a tactic that his targets like Lorenz say has unleashed waves of new online abuse.

“I hope people see this and recognize it for what it is,” Lorenz said on Twitter late Wednesday, “an attempt to mobilize an army of followers to memorize my name and instigate harassment.”

In a statement to The Washington Post, a Fox News spokesperson defended Carlson’s segments, saying that “no public figure or journalist is immune to legitimate criticism of their reporting, claims or journalistic tactics.”

Carlson has repeatedly been accused of sparking torrents of abuse at journalists from the Times and other publications by targeting them for criticism on his show.

In July, the Fox host alleged that the Times had been working on a story about the location of his family home, which he claimed was an effort to “terrorize” and intimidate him.

The Times denied that a report with those details was in the works. But after Carlson railed at the writer and photographer supposedly behind the piece, their personal details were repeatedly posted online by an army of conservative Twitter accounts. The photographer, Tristan Spinski, said that someone tried to break into his home in the days that followed.

Three months later, NBC News slammed Carlson for a similar situation, saying the Fox News host had “encouraged harassment” of one of its reporters, Brandy Zadrozny, after a former Trump aide on his show attacked her over her reporting.

Lorenz, a Los Angeles-based reporter who covers internet culture, is no stranger to online harassment. Asked during a 2019 Times Q&A about the “most annoying internet trend,” she named the growing tide of abuse against her and other women.

“I believe it’s directly tied to the broader trend of people spending more time in closed, moderated spaces, like Facebook groups, group chats, subreddits and so on,” Lorenz said. “I think that shift is a natural consequence of these large, open social networks’ failure to create a safer experience for their users.”

But since an error in a tweet last month – she had misattributed comments by one co-founder of the venture capital firm Andreessen Horowitz to its other co-founder before quickly correcting the post – attacks on her appeared to have come to a head.

To mark International Women’s Day this week, she wrote a plea to her Twitter followers on Tuesday to “please consider supporting women enduring online harassment,” citing a smear campaign that she said has “destroyed” her life.

I’m slightly open abt some of what I deal w/ but the scope of attacks has been unimaginable. There’s no escape. It has taken everything from me. The only mild solace I’ve found is w/ other women who have had their lives destroyed in the same way. We’ve developed deep trauma bonds

That night, Carlson seized on her comments during a segment about “powerful people claiming to be powerless,” comparing her to women he said were feigning victimhood, citing Michelle Obama, Hillary Clinton and Meghan, the Duchess of Sussex.

“Destroyed her life, really? By most people’s standards, Taylor Lorenz would seem to have a pretty good life, one of the best lives in the country, in fact,” he said. “Lots of people are suffering right now, but no one is suffering quite as much as Taylor Lorenz is suffering.”

Carlson also claimed that Lorenz is “far younger” and “much less talented” than other prominent New York Times reporters, yet said she maintains a place “at the top of journalism’s repulsive little food chain.”

The Times responded to the segment with a sharply worded statement on Wednesday, lambasting the Fox News host for going after Lorenz and other reporters.

“In a now familiar move, Tucker Carlson opened his show last night by attacking a journalist,” the newspaper said. “It was a calculated and cruel tactic, which he regularly deploys to unleash a wave of harassment and vitriol at his intended target.”

Hours later, Carlson appeared to double down, attacking Lorenz again as well as the Times on his show.

“There’s a lot of real harassment out there. This is not it,” he said. “The people running the New York Times believe that anyone who disagrees with them is committing assault.”

On Twitter on Wednesday night, Lorenz did not address Carlson directly but instead posted a screenshot of a violent email threat she had received.

“I believe all women (especially WOC) deserve support in dealing with this type of abuse,” she wrote. “It does destroy lives, it has taken so much from me. But I will never stop speaking out about how wrong this is.” 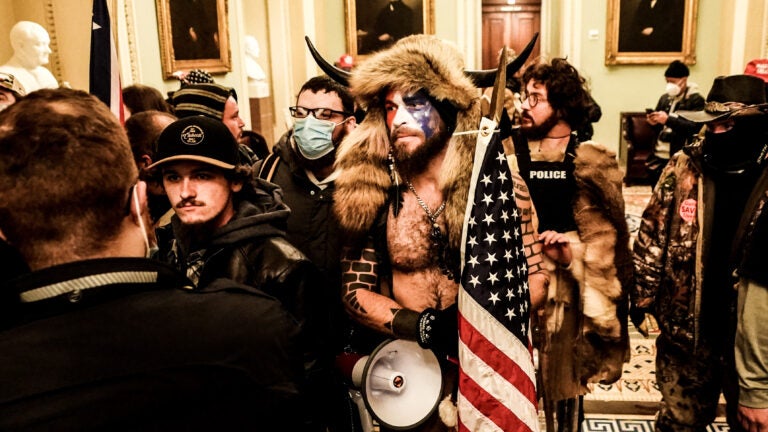 Since Jan. 6, the pro-Trump internet has descended into infighting over money and followers