On March 1, the day after the first coronavirus death in the United States was announced, brothers Matt and Noah Colvin set out in a silver SUV to pick up some hand sanitizer. Driving around Chattanooga, Tennessee, they hit a Dollar Tree, then a Walmart, a Staples and a Home Depot. At each store, they cleaned out the shelves.

Over the next three days, Noah Colvin took a 1,300-mile road trip across Tennessee and into Kentucky, filling a U-Haul truck with thousands of bottles of hand sanitizer and thousands of packs of antibacterial wipes, mostly from “little hole-in-the-wall dollar stores in the backwoods,” his brother said. “The major metro areas were cleaned out.”

Matt Colvin stayed home near Chattanooga, preparing for pallets of even more wipes and sanitizer he had ordered, and starting to list them on Amazon. Colvin said he had posted 300 bottles of hand sanitizer and immediately sold them all for between $8 and $70 each, multiples higher than what he had bought them for. To him, “it was crazy money.” To many others, it was profiteering from a pandemic.

The next day, Amazon pulled his items and thousands of other listings for sanitizer, wipes and face masks. The company suspended some of the sellers behind the listings and warned many others that if they kept running up prices, they’d lose their accounts. EBay soon followed with even stricter measures, prohibiting any U.S. sales of masks or sanitizer.

Now, while millions of people search in vain for hand sanitizer to protect themselves from the spread of the coronavirus, Colvin is sitting on 17,700 bottles of the stuff with little idea where to sell them.

“It’s been a huge amount of whiplash,” he said. “From being in a situation where what I’ve got coming and going could potentially put my family in a really good place financially to ‘What the heck am I going to do with all of this?’”

Colvin is one of probably thousands of sellers who have amassed stockpiles of hand sanitizer and crucial respirator masks that many hospitals are now rationing, according to interviews with eight Amazon sellers and posts in private Facebook and Telegram groups from dozens more. Amazon said it had recently removed hundreds of thousands of listings and suspended thousands of sellers’ accounts for price gouging related to the coronavirus.

Amazon, eBay, Walmart and other online-commerce platforms are trying to stop their sellers from making excessive profits from a public health crisis. While the companies aimed to discourage people from hoarding such products and jacking up their prices, many sellers had already cleared out their local stores and started selling the goods online.

Now both the physical and digital shelves are nearly empty.

Mikeala Kozlowski, a nurse in Dudley, Massachusetts, has been searching for hand sanitizer since before she gave birth to her first child, Nora, on March 5. When she searched stores, which were sold out, she skipped getting gas to avoid handling the pump. And when she checked Amazon, she couldn’t find it for less than $50.

“You’re being selfish, hoarding resources for your own personal gain,” she said of the sellers.

Sites like Amazon and eBay have given rise to a growing industry of independent sellers who snatch up discounted or hard-to-find items in stores to post online and sell around the world.

These sellers call it retail arbitrage, a 21st-century career that has adults buying up everything from limited-run cereals to Fingerling Monkeys, a once hot toy. The bargain hunters look for anything they can sell at a sharp markup. In recent weeks, they found perhaps their biggest opportunity: a pandemic.

As they watched the list of Amazon’s most popular searches crowd with terms like “Purell,” “N95 mask” and “Clorox wipes,” sellers said, they did what they had learned to do: Suck up supply and sell it for what the market would bear.

Initially, the strategy worked. For several weeks, prices soared for some of the top results to searches for sanitizer, masks and wipes on Amazon, according to a New York Times analysis of historical prices from Jungle Scout, which tracks data for Amazon sellers. The data shows that both Amazon and third-party sellers like Colvin increased their prices, which then mostly dropped when Amazon took action against price gouging this month.

At the high prices, people still bought the products en masse, and Amazon took a cut of roughly 15% and eBay roughly 10%, depending on the price and the seller.

Then the companies, pressured by growing criticism from regulators and customers, cracked down. After the measures last week, Amazon went further Wednesday, restricting sales of any coronavirus-related products from certain sellers.

“Price gouging is a clear violation of our policies, unethical, and in some areas, illegal,” Amazon said in a statement. “In addition to terminating these third party accounts, we welcome the opportunity to work directly with states attorneys general to prosecute bad actors.”

Colvin, 36, a former Air Force technical sergeant, said he started selling on Amazon in 2015, developing it into a six-figure career by selling Nike shoes and pet toys, and by following trends.

In early February, as headlines announced the coronavirus’ spread in China, Colvin spotted a chance to capitalize. A nearby liquidation firm was selling 2,000 “pandemic packs,” leftovers from a defunct company. Each came with 50 face masks, four small bottles of hand sanitizer and a thermometer. The price was $5 a pack. Colvin haggled it to $3.50 and bought them all. 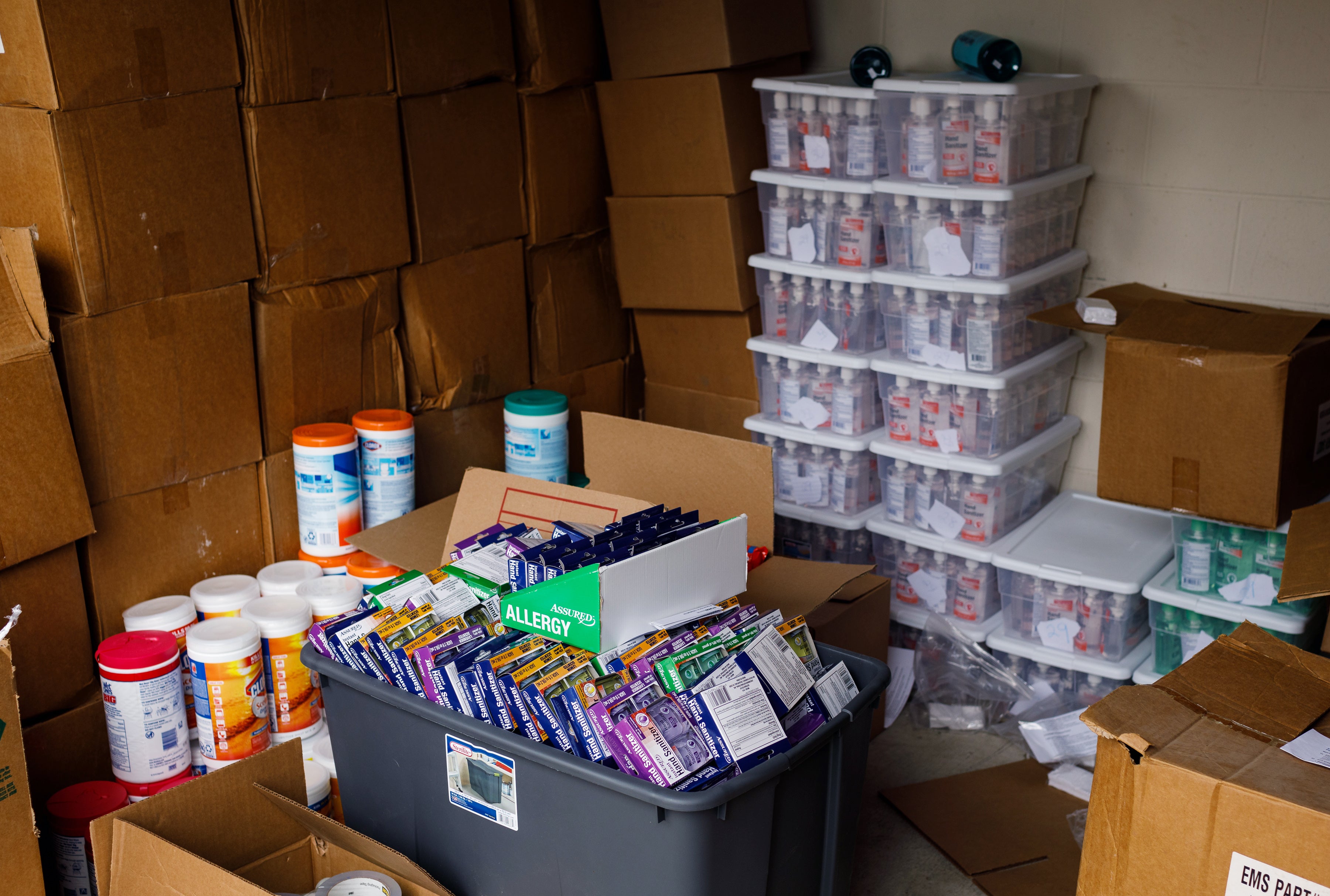 Hand sanitizer that Colvin is keeping in a storage locker.

He quickly sold all 2,000 of the 50-packs of masks on eBay, pricing them from $40 to $50 each, and sometimes higher. He declined to disclose his profit on the record but said it was substantial.

The success stoked his appetite. When he saw the panicked public starting to pounce on sanitizer and wipes, he and his brother set out to stock up.

Elsewhere, other Amazon sellers were doing the same.

Chris Anderson, an Amazon seller in central Pennsylvania, said he and a friend had driven around Ohio, buying about 10,000 masks from stores. He used coupons to buy packs of 10 for around $15 each and resold them for $40 to $50. After Amazon’s cut and other costs, he estimates, he made a $25,000 profit.

Anderson is now holding 500 packs of antibacterial wipes after Amazon blocked him from selling them for $19 each, up from $16 weeks earlier. He bought the packs for $3 each.

Eric, a truck driver from Ohio who spoke on condition that his surname not be published because he feared Amazon would retaliate, said he had also collected about 10,000 masks at stores. He bought each 10-pack for about $20 and sold most for roughly $80 each, although some he priced at $125.

“Even at $125 a box, they were selling almost instantly,” he said. “It was mind-blowing as far as what you could charge.”

Now he has 1,000 more masks on order, but he’s not sure what to do with them. He said Amazon had been vague about what constituted price gouging, scaring away sellers who don’t want to risk losing their ability to sell on its site.

To regulators and many others, the sellers are sitting on a stockpile of medical supplies during a pandemic. The attorney general’s offices in California, Washington and New York are all investigating price gouging related to the coronavirus. California’s price-gouging law bars sellers from increasing prices by more than 10 percent after officials declare an emergency. New York’s law prohibits sellers from charging an “unconscionably excessive price” during emergencies.

An official at the Washington attorney general’s office said the agency believed it could apply the state’s consumer-protection law to sue platforms or sellers, even if they aren’t in Washington, as long as they were trying to sell to Washington residents. 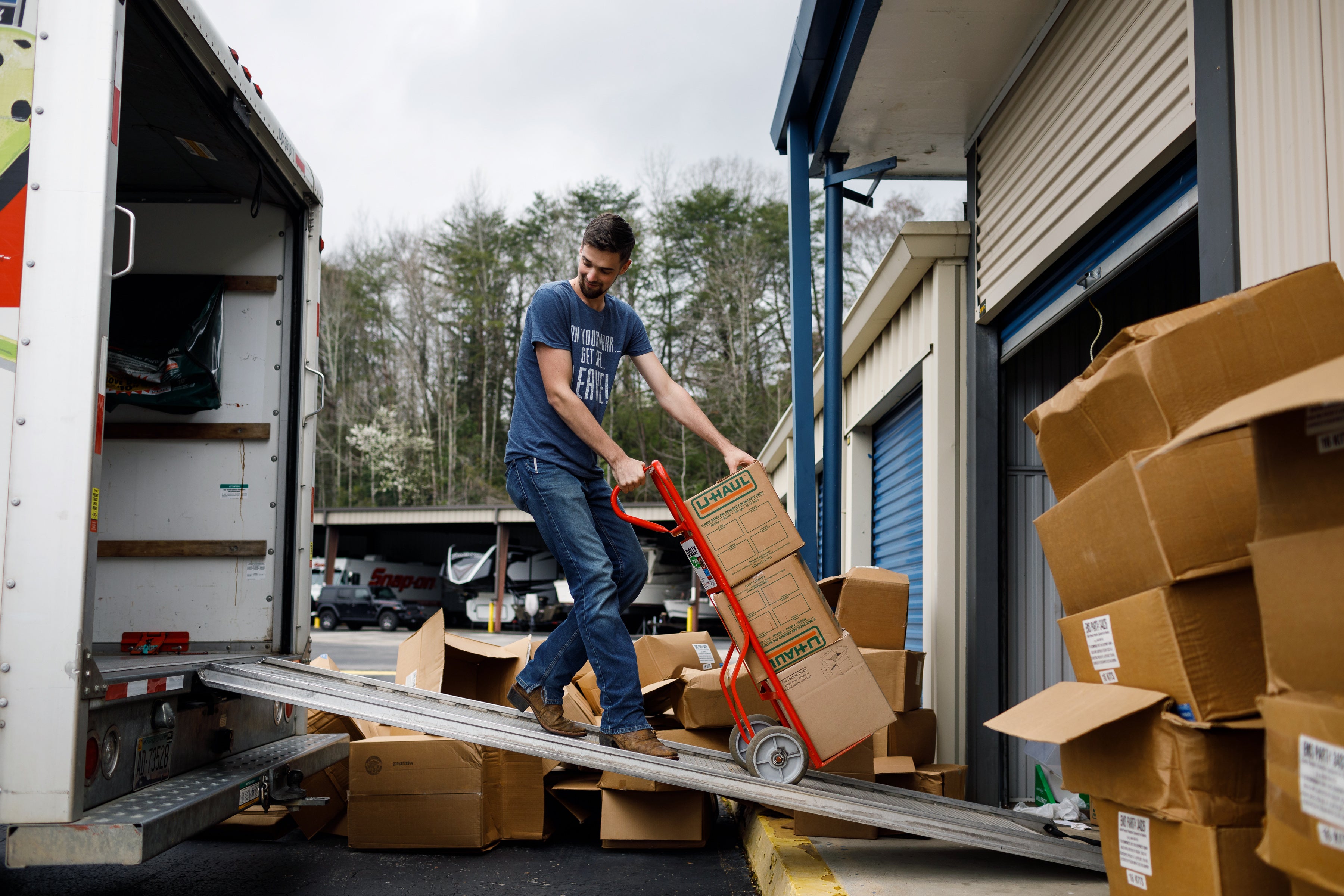 Colvin does not believe he was price gouging. While he charged $20 on Amazon for two bottles of Purell that retail for $1 each, he said people forget that his price includes his labor, Amazon’s fees and about $10 in shipping. (Alcohol-based sanitizer is pricey to ship because officials consider it a hazardous material.)

Current price-gouging laws “are not built for today’s day and age,” Colvin said. “They’re built for Billy Bob’s gas station doubling the amount he charges for gas during a hurricane.”

But what about the morality of hoarding products that can prevent the spread of the virus, just to turn a profit?

Colvin said he was simply fixing “inefficiencies in the marketplace.” Some areas of the country need these products more than others, and he’s helping send the supply toward the demand.

“There’s a crushing overwhelming demand in certain cities right now,” he said. “The Dollar General in the middle of nowhere outside of Lexington, Kentucky, doesn’t have that.”

He thought about it more.

As for his stockpile, Colvin said he would now probably try to sell it locally.

“If I can make a slight profit, that’s fine,” he said. “But I’m not looking to be in a situation where I make the front page of the news for being that guy who hoarded 20,000 bottles of sanitizer that I’m selling for 20 times what they cost me.”

After The New York Times published this article Saturday morning, Colvin said he was exploring ways to donate all the supplies.