NEW YORK — The first of many calls that night involved a 24-year-old man who had a fever, body aches and a cough that sounded like a cement mixer.

While the Brooklyn paramedics took the man’s fever — 103 degrees — they noticed frightening vitals that hinted at the coronavirus: a critically low level of oxygen was flowing into his otherwise clear lungs, while his heart thumped with the intensity of a marathon runner’s. He was taken to the nearest hospital.

Then almost immediately came the next call: a 73-year-old man with symptoms similar to the young man’s. They took him to the hospital, too.

“It’s all a war zone,” one of the paramedics said.

Days later, another paramedic, Phil Suarez, was dispatched to two homes in Upper Manhattan’s Washington Heights neighborhood, where entire families, living in cramped apartments, appeared to be stricken with the virus.

“I’m terrified,” said Suarez, who has been a paramedic in New York City for 26 years and had assisted in rescue efforts during the Sept. 11, 2001, terror attacks and later served in the Iraq War. “I honestly don’t know if I’m going to survive. I’m terrified of what I’ve already possibly brought home.”

Even as hospitals across New York become inundated with coronavirus cases, some patients are being left behind in their homes because the health care system cannot handle them all, according to dozens of interviews with paramedics, New York Fire Department officials and union representatives, as well as city data.

In a matter of days, the city’s 911 system has been overwhelmed by calls for medical distress apparently related to the virus. Typically, the system sees about 4,000 Emergency Medical Services calls a day. On Thursday, dispatchers took more than 7,000 calls — a volume not seen since the Sept. 11 attacks. The record for amount of calls in a day was broken three times last week.

Because of the volume, emergency medical workers are making life-or-death decisions about who is sick enough to take to crowded emergency rooms and who appears well enough to leave behind. They are assessing on the scene which patients should receive time-consuming measures like CPR and intubation, and which patients are too far gone to save.

And, they are doing it, in most cases they say, without appropriate equipment to protect themselves from infection.

The paramedics described grim scenes as New York City has become the epicenter of the coronavirus pandemic in the United States, with more than 30,000 cases as of Saturday, and 672 deaths.

If the rate of growth in cases in the New York area continues, it will suffer a more severe outbreak than those experienced in Wuhan, China, or the Lombardy region of Italy.

One paramedic described responding to a suicide attempt of a woman who had drunk a liter of vodka after her cancer treatments had been delayed, in part because hospitals were clearing their beds for coronavirus patients.

Another paramedic said she responded to so many cardiac arrests in one shift that the battery on her defibrillator died.

“It does not matter where you are. It doesn’t matter how much money you have. This virus is treating everyone equally,” the Brooklyn paramedic said.

The amount of work has been record-setting for the city’s 911 system, said Frank Dwyer, a Fire Department spokesman.

The department said it has started rationing protective gear in an attempt to stave off potential shortages. Earlier this month, the department told workers that they must turn in their used N95 masks — which filter out 95% of airborne particles when used correctly — in order to receive a new one.

“The department is carefully managing and monitoring usage of personal protective equipment and critical supplies to ensure we have what’s needed for this long-term operation,” Dwyer said.

Inside ambulances, on rudimentary digital screens, the dispatches are listed — call No. 2,488, sick; call No. 2,555, sick; call No. 2,894, sick with a fever. The screen goes on for rows, a catalog of the city’s ill and dying. Peppered among them are the usual every day calls still demanding attention: injuries, accidents, heart attacks.

New York City’s soundtrack has always included the sound of ambulance sirens. But now, with many of the city’s businesses closed and its neighborhoods quiet, endless wailing seems to echo through the deserted streets.

Three weeks ago, the paramedics said, most coronavirus calls were for respiratory distress or fever. Now the same types of patients, after having been sent home from the hospital, are experiencing organ failure and cardiac arrest.

“We’re getting them at the point where they’re starting to decompensate,” said the Brooklyn paramedic, who is employed by the Fire Department. “The way that it wreaks havoc in the body is almost flying in the face of everything that we know.”

In the same way that the city’s hospitals are clawing for manpower and resources, the virus has flipped traditional Emergency Medical Services procedures at a dizzying speed. Paramedics who once transported people with even the most mild medical maladies to hospitals are now encouraging anyone who is not critically ill to stay home. When older adults call with a medical issue, paramedics fear taking them to the emergency room, where they could be exposed to the virus.

One paramedic told a 65-year-old patient in Brooklyn, whom she had previously transported to the hospital for recurring issues, to stay home this time and call a doctor.

In New York City, 911 calls are handled by both Fire Department ambulances and ambulance companies staffed by area hospitals. Their duties are effectively the same: They respond to the same medical calls, largely determined by what crew is closer and which is available fastest.

Neither the city, the State Department of Health or the federal Centers for Disease Control and Prevention have issued strict rules as to how paramedics should respond to a coronavirus call. In recent days, Fire Department policy — which applies to all ambulance crews in the 911 system — has given more latitude to paramedics to make decisions on how to handle patients they believe have the virus.

Since many hospitals are in dire need of personal protective equipment like N95 masks, paramedic crews employed by the hospitals also face shortages. The Brooklyn paramedic said she had started sewing her homemade masks with bandannas and coffee filters.

Another paramedic in Brooklyn said she had been using the same N95 mask for days. This past week, as she and her partner exited an apartment building after tending to a patient, the building’s supervisor — noticing the pair’s worn equipment — met them downstairs and shoved new N95 masks and a can of Lysol into their arms.

Like doctors and nurses, many paramedics fear they are already infected and have brought the virus home to their families. On March 18, three members of the Fire Department tested positive for the virus. By Friday, 206 members had positive results.

Officials for the union that represents the city’s paramedics believe the actual number who have been infected is far higher. At a single station in Coney Island, Brooklyn, seven Emergency Medical Services workers were infected, one union official said.

At least one EMS worker with the virus was in an intensive care unit last week and on a ventilator.

The growing pandemic has tested paramedics physically and mentally, said Anthony Almojera, an EMS lieutenant for the Fire Department who said he cried on the job for the first time in his 17-year career.

The husband frantically explained that he had tried to stay home and tend to his wife, but his employer had asked him to work because their facility was overrun with coronavirus patients.

Grudgingly, the man told the medics, he went to work. When he returned home after his shift that day, he found her unconscious in their bed. For 35 minutes, Almojera’s team tried to revive the woman, but she could not be saved.

Usually, Almojera said, he tries to console family members who have lost a loved one by putting his arm around them or giving them a hug.

But because the husband was also thought to be infected with the coronavirus, Almojera delivered the bad news from 6 feet away. He watched the man pound on his car with his fist and then crumble to the ground.

“I’m sitting there, beside myself, and I can’t do anything except be at this distance with him,” Almojera said. “So, we left him.” 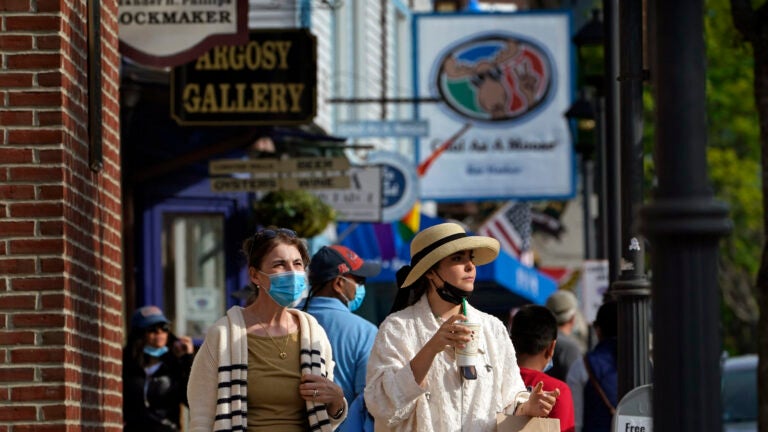