NEW YORK — Such were the expectations for the Navy hospital ship U.S. Naval Ship Comfort that when it chugged into New York Harbor this week, throngs of people, momentarily forgetting the strictures of social distancing, crammed together along Manhattan’s west side to catch a glimpse.

On Thursday, though, the huge white vessel, which officials had promised would bring succor to a city on the brink, sat mostly empty, infuriating local hospital executives. The ship’s 1,000 beds are largely unused, its 1,200-member crew mostly idle.

Only 20 patients had been transferred to the ship, officials said, even as New York hospitals struggled to find space for the thousands infected with the coronavirus. Another Navy hospital ship, the U.S. Naval Ship Mercy, docked in Los Angeles, has had a total of 15 patients, officials said.

“If I’m blunt about it, it’s a joke,” said Michael Dowling, the head of Northwell Health, New York’s largest hospital system. “Everyone can say, ‘Thank you for putting up these wonderful places and opening up these cavernous halls.’ But we’re in a crisis here, we’re in a battlefield.”

The Comfort was sent to New York to relieve pressure on city hospitals by treating people with ailments other than COVID-19, the illness caused by the coronavirus.

President Donald Trump left a nine-day sequester in the White House last week to travel to Norfolk, Virginia, to personally see off the ship as it set sail for New York, saying it would play a “critical role.” The ship’s arrival Monday was cheered as one of the few bright moments in a grim time for the city.

But the reality has been different. A tangle of military protocols and bureaucratic hurdles has prevented the Comfort from accepting many patients at all.

On top of its strict rules preventing people infected with the virus from coming on board, the Navy is also refusing to treat a host of other conditions. Guidelines disseminated to hospitals included a list of 49 medical conditions that would exclude a patient from admittance to the ship.

Ambulances cannot take patients directly to the Comfort; they must first deliver patients to a city hospital for a lengthy evaluation — including a test for the virus — and then pick them up again for transport to the ship.

At a morning briefing Thursday, officials said three patients had been moved to the Comfort. After The New York Times published an article with that number, Elizabeth Baker, a spokeswoman for the Navy, said the number had increased to 20 by late in the day. “We’re bringing them on as fast as we can bring them on,” she said.

Hospital leaders said they were exasperated by the delays.

Dowling said he has had to tear his hospitals apart, retrofitting any unused space, including lobbies and conference rooms, into hospital wards. His facilities now house 2,800 COVID-19 patients, up from 100 on March 20, he said. About 25% of those are in serious conditions in intensive care units.

Across the city, hospitals are overrun. Patients have died in hallways before they could even be hooked up to one of the few available ventilators in New York. Doctors and nurses, who have had to use the same protective gear again and again, are getting sick. So many people are dying that the city is running low on body bags.

At the same time, there is not a high volume of noncoronavirus patients. Because most New Yorkers have isolated themselves in their homes, there are fewer injuries from car accidents, gunshots and construction accidents that would require an emergency room visit.

Ultimately, Dowling and others said, if the Comfort refuses to take COVID-19 patients, there are few patients to send. And given the pernicious spread of the disease in New York City, where nearly 50,000 were infected as of Thursday, dividing patients into those who have it and those who do not is pointless, he said.

The solution, he and others said, was to open the Comfort to patients with COVID-19.

“It’s pretty ridiculous,” he said. “If you’re not going to help us with the people we need help with, what’s the purpose?”

Asked about Dowling’s criticisms, the Defense Department referred to Trump’s statements about the Comfort at his daily briefing. The president said only that the ship was not accepting patients with the coronavirus.

Late Thursday, Gov. Andrew Cuomo of New York reached an agreement with Trump to bring COVID-19 patients to the Javits Convention Center in Manhattan, another alternative site operated by the military, with 2,500 hospital beds.

“I asked this morning to consider the request and the urgency of the matter, and the president has just informed me that he granted New York’s request,” Cuomo said in a statement.

There was no word about doing the same with the Comfort.

Capt. Patrick Amersbach, the commanding officer of the medical personnel aboard the Comfort, said at a news conference that, for now, his orders were to accept only patients who had tested negative for the virus. If ordered to accept coronavirus patients, he said, the ship could be reconfigured to make that happen.

“If our mission shifts, we do what we can to meet that mission,” he said.

From the outset, readying the hospital ship for use in a pandemic proved a challenge. The Comfort was built to operate in battlefield conditions, and its physicians accustomed to treating young, otherwise healthy soldiers suffering from injuries related to gunshots and bomb blasts. Most people who are hospitalized with COVID-19 are older and infected with a novel pathogen that even the world’s top medical researchers do not fully understand.

Any outbreak on board could quickly spread and disable the ship’s operations. As a precaution, the ship’s crew isolated for two weeks before embarking on their mission to New York. They must remain onboard for the duration of their mission in New York.

The ship has struggled to fulfill civilian missions in the past. After Hurricane Maria pummeled Puerto Rico in 2017, the Comfort was sent to relieve overextended hospitals, but ended up treating only a handful of patients each day.

A military physician who had previously served on the Navy’s hospital ships said in an interview that conditions on board were suitable for soldiers, but, with its narrow bunked cots instead of modern hospital beds, it was not ideal for treating civilians.

Though military physicians are accustomed to battlefield situations, they are well-trained, and should be able to handle strains of the pandemic if ordered to treat patients with the coronavirus, he said.

“As military doctors,” he said, “they would absolutely do their best.” 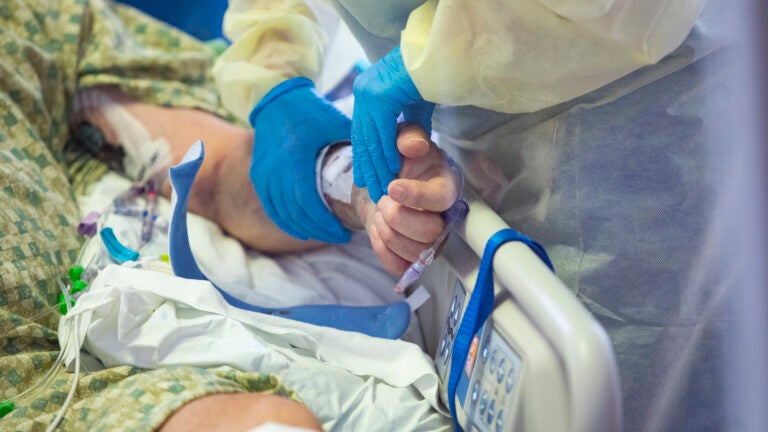