WASHINGTON – Leading disease forecasters, whose research the White House used to conclude that 100,000 to 240,000 people will die nationwide from the coronavirus, were mystified when they saw the administration’s projection this week.

White House officials have refused to explain how they generated the figure – a death toll bigger than the United States suffered in the Vietnam War or the Sept. 11, 2001, terrorist attacks. They have not provided the underlying data so others can assess its reliability, and have not provided long-term strategies to lower that death count.

Some of President Donald Trump’s top advisers have expressed doubts about the estimate, according to three White House officials who spoke on the condition of anonymity because they were not authorized to speak publicly. There have been fierce debates inside the White House about its accuracy.

At a task force meeting this week, according to two officials with direct knowledge of it, Anthony Fauci, director of the National Institute of Allergy and Infectious Diseases, told others that there are too many variables at play in the pandemic to make the models reliable: “I’ve looked at all the models. I’ve spent a lot of time on the models. They don’t tell you anything. You can’t really rely upon models.”

Robert Redfield, director of Centers for Disease Control and Prevention, and the vice president’s office have similarly voiced doubts about the projections’ accuracy, the three officials said.

Jeffrey Shaman, a Columbia University epidemiologist whose models were cited by the White House, said his own work on the pandemic doesn’t go far enough into the future to make predictions akin to the White House fatality forecast.

“We don’t have a sense of what’s going on in the here and now, and we don’t know what people will do in the future,” he said. “We don’t know if the virus is seasonal.”

The estimate appeared to be a rushed affair, said Marc Lipsitch, an epidemiologist and the director of Harvard University’s Center for Communicable Disease Dynamics. “They contacted us, I think, on a Tuesday a week ago, and asked for answers and feedback by Thursday, basically 24 hours,” he said. “My initial response was we can’t do it that fast. But we ended up providing them some numbers responding to very specific scenarios.”

Other experts noted that the White House didn’t even explain the time period the death estimate supposedly captures – just the coming few months, or the year-plus it will take to deploy a vaccine.

Almost the entirety of what the public knows about the death projection was presented on a single slide at a briefing Tuesday from the White House coronavirus task force. A White House representative said the task force has not publicly released the models from which it drew, out of respect for the confidentiality of the modelers, many of whom approached the White House unsolicited and simply want to continue their work without publicity.

A representative for Fauci did not respond to a request for comment. A spokeswoman for Vice President Mike Pence declined to comment. On a Thursday call with conservative leaders, Pence said that it was “difficult” to view the models but that “the president thought it was important to share with the American people.”

Among epidemiologists, the estimate raised more questions than it answered – not just about methodology and accuracy but, perhaps more importantly, about purpose.

The primary goal of such models amid an outbreak is to allow authorities to game out scenarios, foresee challenges and create a coherent, long-term strategy – something some experts worry doesn’t exist within the White House.

“I wish there were more of a concerted national plan. I wish it had started a month and a half ago, maybe two months ago,” Shaman said.

Natalie Dean, a biostatistician who was not involved in the White House effort but is working on coronavirus vaccine evaluation with the World Health Organization, pointed out that “the whole reason you create models is to help you make decisions. But you have to actually act on those projections and answers. Otherwise, the models are useless.”

At Tuesday’s briefing, Trump announced the government’s projected death count, saying it was based on data “that has been, I think, brilliantly put together.”

The coordinator of Trump’s coronavirus task force, Deborah Birx, then projected a slide with a high-arcing mountain showing the worst-case scenario: 1.5 million to 2.2 million deaths if Americans and the government did absolutely nothing to stop the virus. And a smaller – but still imposing – hill with 100,000 to 240,000 deaths if measures such as social distancing are taken.

Birx said the projection was based on five or six modelers, including from Imperial College in Britain and Harvard, Columbia and Northeastern universities. “It was their models that created the ability to see what these mitigations could do, how steeply they could depress the curve,” Birx said, referring to the trend line on a graph depicting infection counts.

But two models appeared to have been particularly influential: the one by Imperial College and one from the Institute for Health Metrics and Evaluation at University of Washington (IHME).

At a news briefing Sunday, Birx explained the process this way: Her task force initially reviewed the work of 12 models. “Then we went back to the drawing board over the last week or two, and worked from the ground up, utilizing actual reporting of cases,” Birx said. “It’s the way we built the HIV model, the TB model, the malaria model. And when we finished, the other group that was working in parallel – which we didn’t know about,” referring to the IHME group.

The IHME model initially that estimated deaths through this summer would total 38,000 to 162,000 – a lower projection than many others and beneath the White House’s own estimate. But because of its lower figure and Birx’s comments, experts believe it to be a main source for the White House’s best-case scenario of 100,000 to 240,000 deaths.

Meanwhile, the White House appeared to rely on Imperial College for its worst-case scenario. That study estimated as many as 2.2 million U.S. deaths if no action were taken, 1.1 million deaths if moderate mitigation strategies were adopted, and an unspecified number if drastic measures were taken.

But as the common statistician’s refrain goes: A model is only as good as the assumptions it is built on.

Knowing the assumptions built into the White House officials’ projected number could tell a lot: exactly how contagious and deadly they believe the virus to be. It also would reflect their beliefs on how the federal government and states will behave in coming months and whether they will do enough to make a difference.

The IHME model assumes every state will quickly impose stay-at-home orders, which some states, including Alabama and Missouri, have yet to do. It also assumes the entire country will maintain these restrictions until summer. But Trump has extended the White House’s restrictions until April 30 and made clear that he wants to reopen the country as soon as possible.

Another key question is what time period the White House’s 100,000-to-240,000 projection covers. Imperial College’s worst-case scenario calculated the toll exacted by the virus over a couple of years. But if the White House’s projection covers only the next few months, like the IHME model does, the true death toll will almost certainly be larger because America will probably see additional waves of covid-19 until a vaccine is deployed.

And it is important to note, experts say, that the IHME model differs from most epidemiological models – another reason its death estimate is lower, experts say.

Epidemiological projections are often based on what is called the Susceptible Infectious Recovered model (SIR). It is a mathematical way to represent three different populations in an outbreak: those vulnerable to infection, those who are infectious and those gradually removed from the equation by death or recovery.

IMHE, however, took an entirely different approach. It is a statistical model that takes the trending curve of deaths from China, for example, and “fits” that curve to emerging death data from cities and counties to predict what might come next.

“It’s a valuable tool, providing updated state-by-state projections, but it is inherently optimistic because it assumes that all states respond as swiftly as China,” said Dean, a biostatistician at the University of Florida.

In an interview earlier this week, the head of the IHME group, Christopher Murray, said his model was created for a different purpose from Imperial College’s.

“The reason we created our model is to help hospitals plan. How many beds you’ll need, how many ventilators, when the peak is likely coming,” Murray said. The purpose of Imperial’s model “is to make people realize government intervention is crucial and what would happen without that.”

An audience of one

For the past decade, the federal government has been nurturing a group of about 50 epidemiologists and math modelers at universities. The U.S. government launched the effort when it became apparent that U.S. expertise in disease modeling was outstripped by England’s world-class experts, said Dylan George, a former Obama administration official at the White House Office of Science and Technology Policy who was involved in that effort.

Since January, the CDC has been working with that larger group of modeling teams, but it has been unclear, especially in recent weeks, how much the White House was listening to their data and projections.

The handful of projections the task force has plucked from the group and used in White House discussions, administration officials said, are sometimes deployed with an audience of one in mind: Trump.

Officials have said Imperial College’s 2.2 million-death projection convinced Trump to stop dismissing the outbreak and take it more seriously. Similarly, officials said, the new projection of 100,000 to 240,000 deaths is what convinced Trump to extend restrictions for 30 days and abandon his push to reopen parts of the United States by April 12, which many health experts believe could have worsened the outbreak.

But what remains unclear and alarming to many modelers is whether the White House is using their data to create a coordinated, coherent long-term strategy.

Such a national strategy is critical because of the lag time in data that comes with outbreaks.

Any numbers available today – confirmed cases, hospitalizations and deaths – lag two to three weeks behind how the virus is spreading. So decisions made by authorities based on that present-day data are, almost by definition, reactive and potentially come too late.

To get ahead of a virus like this one, authorities must use projections of the future to act in the present.

A White House official who spoke on the condition of anonymity because the official was not authorized to speak by name said the administration does have long-term plans and has been addressing those concerns in the daily briefings.

“Repurposing a [car] plant to make ventilators is great, but honestly – I’m not one to cast stones – but it could have been done earlier,” said Shaman, the Columbia epidemiologist whose models have been reviewed by the White House.

But Shaman doesn’t think the White House’s death projection is too low, nor does he think it’s too late to act decisively.

The Washington Post’s Lena H. Sun contributed to this report. 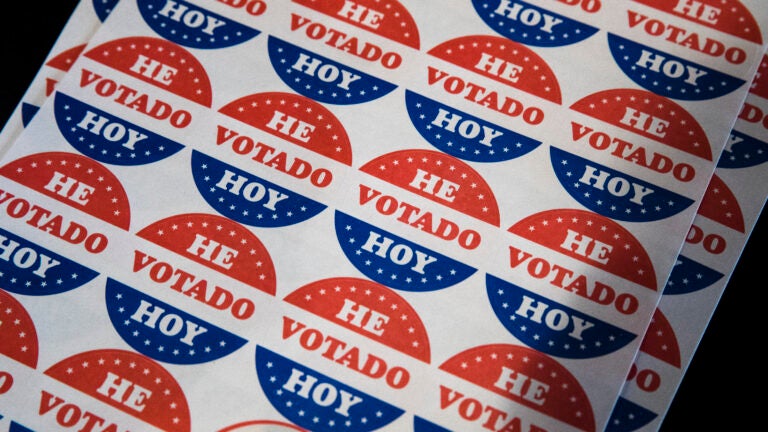 Inside the ‘big wave’ of misinformation targeted at Latinos