WASHINGTON – If you could have peeked into a building on Gallaudet University’s campus on a recent day, you would have seen a 6-foot-3 man crawling on the floor.

He was trying to find his name on a case of water.

During another time, the task would have been easy enough for James Groff, a 28-year-old graduate student. The case had been left for him in a building not far from his dorm. The problem was that his was not the only case there, which meant he had to locate the one bearing his name, and he had to do that with limited use of three of his senses.

Groff is deaf, blind and because of social distancing expectations, on that day he couldn’t rely on touch.

He couldn’t run his hand across those cases to feel if they held tags with student ID numbers or names. He couldn’t pick them up and bring them close enough to his face to use what little vision he has to decipher the letters and numbers on them.

“I had to get on my hands and knees to be able to read each one without touching it,” Groff tells me through an email exchange on a recent evening. “I am a grown man and can provide for myself and find or make ways, but this was hard for me to do since I could NOT touch what was not mine, yet I had to be close enough to see my name. If it is that hard for me, imagine how hard it is for someone more medically blind than me.”

Groff, who hopes to one day become a U.S. senator, describes himself as DeafBlind, with both words capitalized and combined to convey not only his disabilities but also a sense of cultural identity. The DeafBlind community includes people who have zero ability to see and hear, and those who have so little that they have been medically deemed deaf and blind.

Groff describes his vision as “a mix between being underwater and getting shot while playing Call of Duty.” Everything is blurry. He can’t see lips well enough to read them or tell if someone near him is laughing.

He needs touch to do that.

He uses his hands to get his bearings in unfamiliar environments and to communicate. Like many people in the DeafBlind community, Groff often relies on Pro-tactile American Sign Language, which incorporates hand-on-body motions to convey what the eye and ear can’t detect. To signal to Groff that someone is laughing, an interpreter trained in that form of tactile sign language would make a motion that resembles a tickle.

“Without signals like this,” Groff said, “I might miss out partially or wholly on what is happening around me.”

The need for social distancing has disrupted all of our lives in significant ways. It has caused working parents to become stressed-out teachers, students to miss out on pivotal moments and the elderly to grow used to seeing relatives through glass windows and phone screens. In its cruelest form, it has also forced people to lose jobs, beloved businesses to shut down and families to mourn loved ones they didn’t get to tell goodbye.

Those burdens are crushingly heavy, but for the most part their weight has been shared. They are part of our collective concerns and mutual mourning.

For many in the DeafBlind community, social distancing has created unique worries and exceptional challenges.

It is forcing them to grow increasingly disconnected at a time when they need more than ever to be aware of what’s happening around them.

In the past week, I have spoken, through email exchanges, with people across the country who identify as DeafBlind to get a sense of how a population that relies so heavily on touch is doing now that grabbing a doorknob or standing closer than six feet from a stranger carries risks.

They described losing critical interpreter services, feeling increasingly isolated and fearing what might happen to them if they end up in the hospital.

“Are they letting patients who test positive keep their phones?” asked Quinn Michaela Burch who lives in Schenectady, New York, with her boyfriend, who is also DeafBlind. “If so and I did end up in that situation, I hope I’d stay coherent and alert enough to be able to use my phone to communicate.”

Before the phrase “flatten the curve” became part of our collective vocabulary, Burch had a trainer at the YMCA, and she took trips to the grocery store, the bank and an animal protection organization with the help of “community habilitation” staff members. She also took walks to McDonald’s by herself.

Now, she says, the YMCA is closed, those staff members aren’t available to help her, and she doesn’t walk to McDonald’s anymore.

“My days are pretty bleak,” she said.

Haben Girma – a public speaker and the author of a memoir title, “Haben: The Deafblind Woman Who Conquered Harvard Law” – gave a talk at Stanford University on March 2. Since then, she has stayed at her home in the San Francisco area.

She had planned for a book tour in April. That has been canceled. She was supposed to officiate at a friend’s wedding in May. That has been postponed.

“All my life I struggled with isolation,” Girma said. “My memoir captures the many ways I’ve tried to forge connections in a mostly inaccessible world. The current isolation brings back the old fears that never entirely flee. I miss shaking hands with readers at book talks. I miss swing dancing every Wednesday night. I miss fearless hugs.”

And unlike the rest of us, she can’t escape those emotions by bingeing on Netflix. The 31-year-old needs transcripts to access shows and movies. Her first Netflix experience, she said, was when she “devoured” the transcript of “Crip Camp: A Disability Revolution” “like a thrilling novel.”

But those transcripts are not easy to get, she said.

They also aren’t her most pressing concern amid the pandemic.

“I’m worried hospitals will not provide communication access for DeafBlind people,” she said. “Many DeafBlind people rely on tactile interpretation, which cannot be done remotely or even from six feet away. I’m worried hospitals facing scarce resources will decide not to save our lives. There is an ableist assumption that causes some people to think it’s better to be dead than disabled.”

Rossana Reis, a 47-year-old retired counselor and advocate turned artist who lives in Washington, has already devised a backup communication plan in case she ends up at the hospital. She plans to use a device that would allow her to communicate through typing. Even so, she has questions.

“I’ve been reading stories of how doctors speak behind a glass and not sure how much the mic will transmit speech into text from a distance,” she said. “Would the medical staff be willing to type on my device, if it comes to that? . . . Otherwise, I’m learning that many hospitals across the nation are not allowing interpreters in treatment areas. That would be problematic for me, as I am not able to rely on video remote interpreting.”

She said only some states have deemed qualified sign language interpreters as “essential workers.” All states need to do so, she said. They also need to ensure that those workers have personal protective equipment.

“Being relegated to the keyboard for interaction with others outside their homes instead of in-person, Pro-tactile/tactile communication, is not sustainable for many DeafBlind people,” she said.

DeafBlind students at Gallaudet University, a school for deaf and hard-of-hearing individuals, received an email telling them that services from Support Service Providers and Certified Deaf Interpreters would be terminated April 3.

A copy of that email was provided to me. It makes an exception for emergency situations and describes the decision as a “necessary one as our priority is to protect not only your health but also the health of your interpreters.”

“I am working on some very complex things, and taking away these services makes this work even more difficult,” said Groff, who is working on a master’s thesis on Taiwanese independence and hopes to graduate in December with a master’s degree in public administration. From there, he wants to go to law school.

Despite the new challenges he will face, Groff said he expects to “persevere” because he has behind him seven years at the school and a lifetime of plucking “backup plans out of thin air.”

He worries more about those DeafBlind students who just started at the university.

One of those students is Ali Goldberg. The freshman is majoring in education and uses tactile sign language to communicate.

“I feel so isolated, and I feel really alone,” he wrote in the email to me. “As a Deaf-Blind individual, we can’t see or hear what’s going on around us. We tend to feel more isolated as it is, and when you put us in an environment in which we have to be completely isolated, it makes us feel even more cut off from the world. It’s very depressing.”

In that email, he described feeling “afraid for the future.”

He also expressed an appreciation for being able to talk about how social distancing is affecting him and a hope that it would help more people understand what the DeafBlind community is going through right now.

The experiences of the DeafBlind community may be unique, but their concerns shouldn’t be theirs alone.

“As a DeafBlind individual like myself, we are left out of everything going on around us,” he wrote. “Let’s get through this together.” 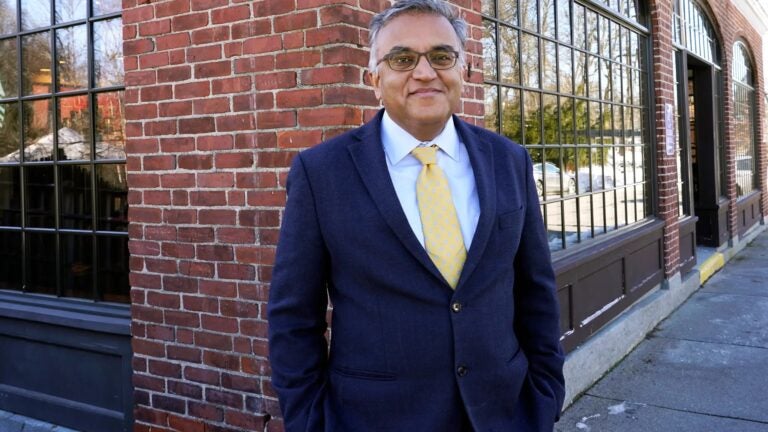