As governors across the country fell into line in recent weeks, South Dakota’s top elected leader stood firm: There would be no statewide order to stay home.

Such edicts to combat the spread of the novel coronavirus, Gov. Kristi Noem argued disparagingly, reflected a “herd mentality.” It was up to individuals – not government – to decide whether “to exercise their right to work, to worship and to play. Or to even stay at home.”

And besides, the first-term Republican told reporters at a briefing this month, “South Dakota is not New York City.”

But now South Dakota is home to one of the largest single coronavirus clusters anywhere in the United States, with more than 300 workers at a giant pork-processing plant falling ill. With the case numbers continuing to spike, the company was forced to announce the indefinite closure of the facility Sunday, threatening the U.S. food supply. 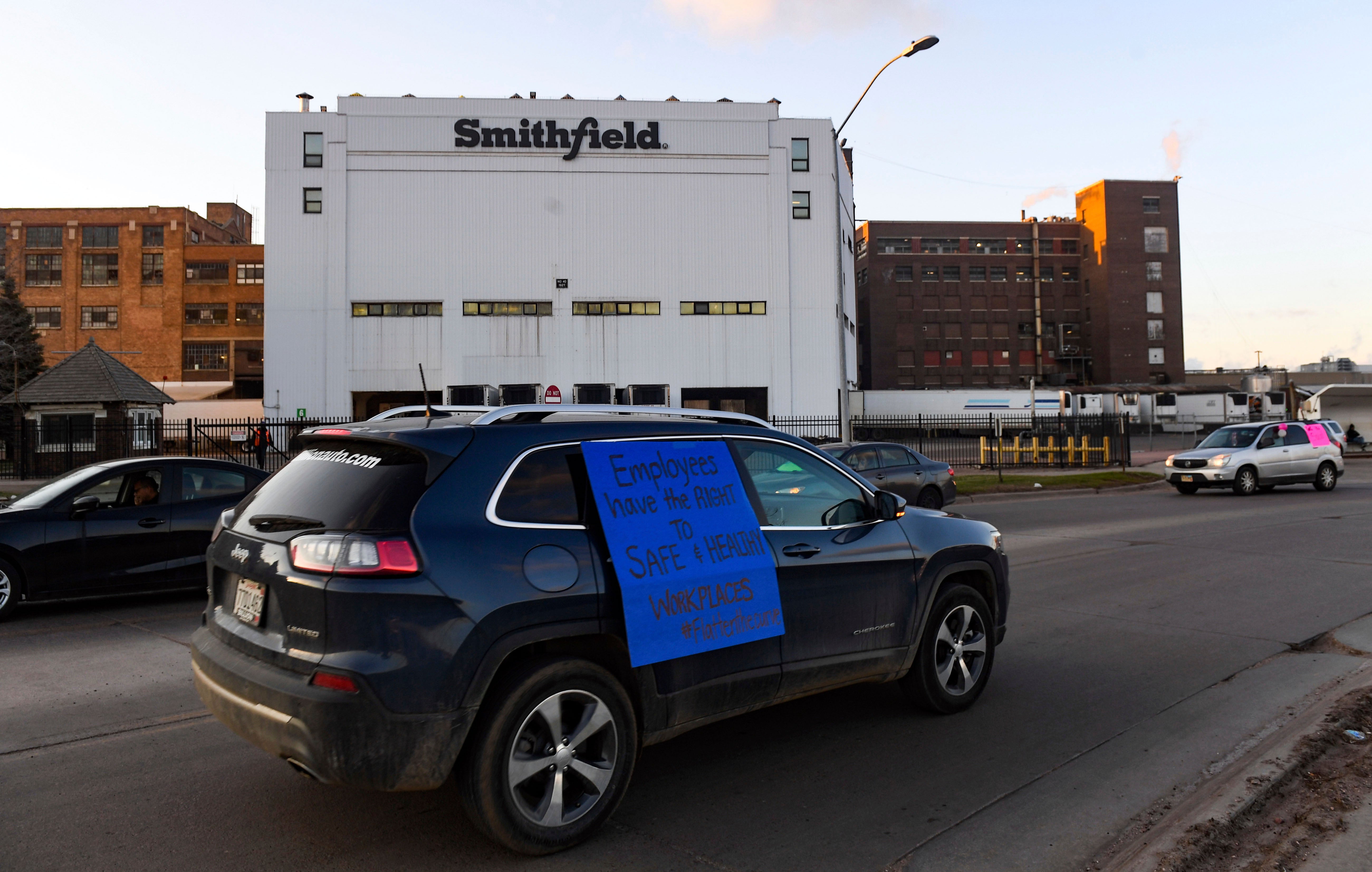 In this April 9, 2020, photo, a car with a sign calling for a safe and healthy workplace drives past Smithfield Foods in Sioux Falls, South Dakota, during a protest.

“A shelter-in-place order is needed now. It is needed today,” said Sioux Falls Mayor Paul TenHaken, whose city is at the center of South Dakota’s outbreak and who has had to improvise with voluntary recommendations in the absence of statewide action.

But the governor continued to resist. Instead, she used a press briefing Monday to announce trials of a drug that President Donald Trump has repeatedly touted as a potential breakthrough in the fight against coronavirus, despite a lack of scientific evidence.

The piecemeal approach to combating the coronavirus in South Dakota offers a throwback to America’s not-so-distant past, the period around a month ago when governors were still leery of using their powers to shut down restaurants and bars or to order people, for the greater good, to stay at home.

It also may offer a glimpse of the country’s near-term future, as pressure builds – not least from the president – to reopen after a weeks-long shutdown. Trump has been eager to get the economy on its feet again by the beginning of May after record rises in unemployment claims and dramatic falls in the stock market.

Yet as South Dakota’s experience shows, no part of the country is immune to being ravaged by the virus. And rescinding orders that people stay at home – or declining to issue them, as in the case of South Dakota and four other states – offers plenty of peril.

Reopening the county by May is “not even remotely achievable,” said TenHaken, who, like Trump and Noem, is a Republican. “We’re in the early innings of this thing in Sioux Falls.”

Already, the experience has been harrowing: As of early April, the city had relatively few cases. But over the course of last week, the numbers surged as the virus ripped through the city’s Smithfield Foods production plant, a colossus that employs 3,700 people – many of them immigrants – and churns out 18 million servings of pork product per day.

On Monday alone, 57 more workers were confirmed to have positive diagnoses, bringing the total well above 300 – and making it one of the country’s largest clusters. Other major clusters include Cook County Jail in Chicago and the USS Theodore Roosevelt aircraft carrier.

The Smithfield cases amount to more than a third of the state’s overall total, which stood at 868 on Monday, including six deaths, in a state of nearly 900,000 people.

Over the weekend, Smithfield bowed to growing pressure and said it would shutter the facility indefinitely in a bid to contain the spread – though Smithfield leaders cautioned that the action could severely disrupt the nation’s food supplies. The factory, like other food production facilities, had earlier been deemed essential by the federal government.

The shutdown of the Sioux Falls plant, coupled with other closures, “is pushing our country perilously close to the edge in terms of our meat supply,” Kenneth Sullivan, Smithfield president and chief executive, said in a statement. “It is impossible to keep our grocery stores stocked if our plants are not running.”

Before the closure, workers had complained that they were not given sufficient access to protective gear, such as masks. The company said Thursday that it had taken steps to reduce the spread, including “adding extra hand sanitizing stations, boosting personal protective equipment, continuing to stress the importance of personal hygiene.” But workers said they were required to work so closely together that it was impossible to stay healthy.

“There is no social distance,” said Lily, a 30-year-old Mexican immigrant who had worked at the plant for nearly 13 years but quit because she feared bringing the coronavirus home to her husband and young daughter.

Lily, who spoke on the condition that her last name not be published for fear of retribution, said it is not only at work where she feared the virus. “Many people are sick. Not only in the plant – in the whole city,” she said.

Sioux Falls, home to nearly 200,000 people, is the state’s largest city. TenHaken, the mayor, said in an interview that he has done everything within his power to enforce social distancing, including using a “no lingering” ordinance to confine restaurants to takeout and delivery service and strongly recommending that all nonessential businesses close.

He has little power of enforcement, however, and no ability to control what happens in nearby jurisdictions. Restaurants within Sioux Falls may have shut down for in-person dining. But the rules don’t apply outside city limits. The State Theater marquee displays a parody of a film title to encourage social distancing, April 3, 2020 in Sioux Falls.

Without a more assertive response from state government – including stay-at-home orders in at least the surrounding counties and a declaration of a statewide public health emergency – TenHaken said he fears the spread will continue.

TenHaken’s plea for state action has also been made by public health professionals.

The South Dakota State Medical Association wrote Noem a letter April 3 warning the governor that the state “may soon face the challenges and hardships currently being seen in New York and other large cities across the country if a shelter in place order is not issued immediately.”

Noem is one of five governors representing relatively rural states – North Dakota, Iowa, Nebraska and Arkansas are the others – still resisting such calls. All are Republicans, and all have used similar justifications for going against the national grain.

In Arkansas, Gov. Asa Hutchinson has boasted of his state’s “very targeted response” and argued that other states have so many exemptions to their stay-at-home orders that they “override the rule.”

Iowa Gov. Kim Reynolds has said that keeping people at home takes a toll on their mental health and that “suicides and domestic abuse” would rise.

Noem has perhaps gone even further than others, however, citing the principle of individual liberty and the limitations of government to dictate people’s behavior – even when public health may depend on it.

Citing scientific modeling, the governor acknowledged this month that up to 70% of residents in her state may ultimately fall ill to coronavirus. But, she suggested, it wasn’t up to government to tell them how to behave.

“The people themselves are primarily responsible for their safety,” she said. “They are the ones that are entrusted with expansive freedoms.”

Noem on Monday continued to defend her approach, saying the state had high levels of voluntary participation in social distancing strategies – “much greater than some of those states that issued shelter-in-place orders.”

She also said that spikes in case numbers, such as the one at Smithfield, had been “expected” and that the state’s numbers overall were trending in the right direction.

Noem, who said she was closely coordinating with the White House, focused her remarks on a trial of hydroxychloroquine, the anti-malarial drug that Trump has frequently touted as a possible remedy for the coronavirus, though its effectiveness has not been proved. Scientists in Brazil stopped a study of the drug in coronavirus patients after some developed irregular heart rates.

She batted away questions about a statewide stay-at-home order – or even countywide ones. But public health experts say such an order is what’s needed, even in a rural state such as South Dakota.

“In rural areas, there’s less access to health care,” said DenYelle Kenyon, director of the public health program at the University of South Dakota. “And all it takes is one case to spread to a small community.”

Front-line medical workers, too, have been outspoken in calling for the state to step up.

Amy Taylor, a Sioux Falls-based nurse who is married to a nurse practitioner, sat down one evening and spent 10 minutes tapping out a petition on change.org demanding that Noem order people to stay home.

The petition was closing in on 30,000 signatures as of Monday night. Many of the signers identify themselves as health-care workers.

“I just don’t understand why we aren’t doing everything we can to save people’s lives,” Taylor said.

More than 160 county and city leaders in South Dakota have also petitioned Noem, urging her to declare a statewide public health emergency.

Rapid City Mayor Steve Allender was among those who signed. As leader of the state’s second-largest city, he has instituted aggressive measures to keep people apart. But as is true in Sioux Falls, citywide efforts can only do so much when the state’s response is such a patchwork.

Now, economic pain from the shutdown is growing – and so is frustration that the city’s businesses have been closed while others nearby remain open. Without the state backing him up, Allender said, it will be tough to hold the line. 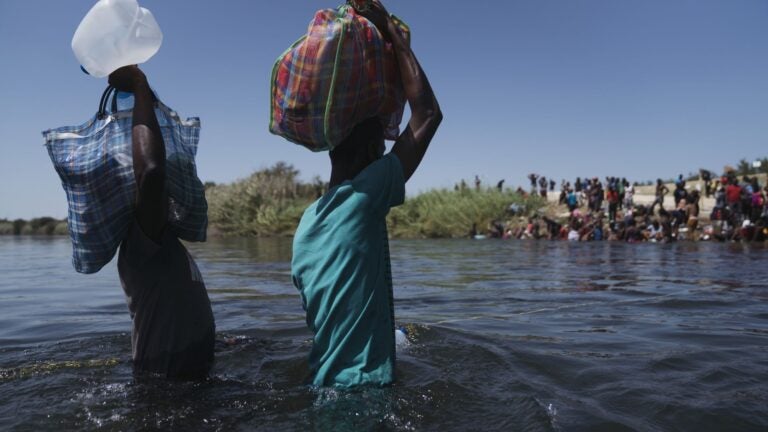