If all roads in Michigan lead to the state capitol, conservative protesters on Wednesday made sure they were closed.

For miles, thousands of drivers clogged the streets demanding Michigan Democratic Gov. Gretchen Whitmer ease restrictions and allow them back to work. They drowned downtown Lansing, Michigan, in an cacophony of honking. They blared patriotic songs from car radios, waving all sorts of flags from the windows — President Trump flags, American flags and the occasional Confederate flag.

But in the massive protest Whitmer’s stay-at-home executive order — which critics have argued is excessive and beyond her authority — pleas from organizers that protesters to stay in their vehicles went unheeded. Many got out of their cars and crashed the front lawn of the capitol building, with some chanting, “Lock her up!” and “We will not comply!”

“Do you think [Whitmer] is listening?” Breitbart News reporter Kyle Olson asked one of the organizers, Meshawn Maddock, a leader of the Michigan Conservative Coalition, on Facebook Live.

“Oh my God, how could she not be listening to this?” Maddock responded, adding: “There’s no reason why right now today she couldn’t come out and say, ‘Michigan, I hear you, and it’s time to get workers back to working.'”

The governor had heard plenty. She responded to the demonstration during her Wednesday news conference, saying she was “disappointed” in the mostly mask-less protesters outside and those in cars who affected bus service and even blocked an ambulance (which the organizers refuted).

Whitmer said the protesters might have just made the situation worse in a state already dealing with more than 28,000 confirmed cases of coronavirus, the third-worst in the nation. The protest, she said, “endangered people’s lives.”

“We know that this demonstration is going to come at a cost to people’s health,” Whitmer said. “We know that when people gather that way without masks . . . that’s how COVID-19 spreads. And so the sad irony here is that the protest was that they don’t like being in this stay-at-home order, and they may have just created a need to lengthen it, which is something we’re trying to avoid at all costs.”

Coming on the heels of similar protests in Ohio and North Carolina, it was likely the largest showing to date of conservative pushback against social distancing restrictions — and perhaps a preview of what’s to come.

The Michigan Conservative Coalition and Michigan Freedom Fund — founded by Greg McNeilly, political adviser to the family of Education Secretary Betsy DeVos — planned the protest following Whitmer’s executive order last Thursday that expanded existing restrictions. Becoming one of the stricter stay-at-home orders in the country, Whitmer’s order intended to minimize unnecessary travel as much as possible. But some conservatives, including state lawmakers, argued it went too far and was inconsistent.

Confused shoppers found that they could buy liquor and lottery tickets on a trip to the grocery store, but couldn’t visit the vegetable seed aisle or gardening center. The order required large stores to shut down plant nurseries and rope off sections where carpet, flooring and paint were sold, provisions conservatives found both arbitrary and harmful to business owners.

The response in Michigan was aggressive. Residents started a Facebook group called “Michiganders Against Excessive Quarantine” and some filed a lawsuit. A letter to Whitmer from six Republican members of Congress from Michigan said Whitmer was “needlessly shutting down large sectors of the economy and further restricting the lives of residents.”

Right-wing media joined in the chorus. Tucker Carlson of Fox News described Whitmer’s actions as “petty authoritarianism,” accusing her of putting on a show in an effort to be former vice president Joe Biden’s running mate. And on Wednesday, conservative talk-show host and Trump favorite, Rush Limbaugh, applauded the protesters, saying that Democrats like Whitmer are “being coached by Nancy Pelosi and Schumer to push this harder than they might normally feel is appropriate.”

Local law enforcement on Wednesday even joined the conservative criticism, as four county sheriffs wrote an open letter informing residents that they would not be “strictly” enforcing Whitmer’s new order.

“While we understand her desire to protect the public, we question some restrictions that she has imposed as overstepping her executive authority,” the sheriffs of Leelanau, Benzie, Manistee and Mason counties wrote, while still encouraging following social distancing rules. “She has created a vague framework of emergency laws that only confuse Michigan citizens.”

The political pressure that Whitmer has faced to ease restrictions is starting to play out nationwide, especially as governors start coordinating plans for a safe reopening of the economy.

As The Washington Post reported earlier this week, conservative groups such as the Heritage Foundation and American Legislative Exchange Council are urging GOP lawmakers and the White House to push back against public health experts in a bid to reopen the economy as quickly as possible.

“A lot of Republicans and conservatives feel there might be an overreaction to all of this,” tea-party organizer Richard Viguerie told The Post’s Jeff Stein and Robert Costa. “We’re all anxious to get back. Conservatives feel the government has overreacted, and it’s got to end.”

Elsewhere, protests similar to the one in Michigan played out in North Carolina and Ohio, as conservative protesters swarmed the capitol grounds to urge Govs. Roy Cooper, a Democrat, and Mike DeWine, a Republican, respectively, to ease restrictions and reopen the economy. In Ohio, some in MAGA gear pressed themselves up against the windows of the Capitol building, photos in the Columbus Dispatch show.

Maddock, the leader of the Michigan Conservative Coalition who also campaigns for Trump, told Fox News she hoped Whitmer would see every car that attended Wednesday’s protest as a representing a family out of job, struggling to pay bills and the mortgage.

Asked by a reporter what she might say to those families, Whitmer said that she had thought of them while signing the stay-at-home order, knowing that it would hurt businesses and families. But, she said, “I also know it is absolutely necessary with the path that we are on,” cautioning that carelessly rushing to lift restrictions too soon would leave the state’s economy worse off in the long run.

“I’m not focusing on politics,” she said. “I’m trying to save lives here. We have to remember the enemy is the virus. Not one another.” 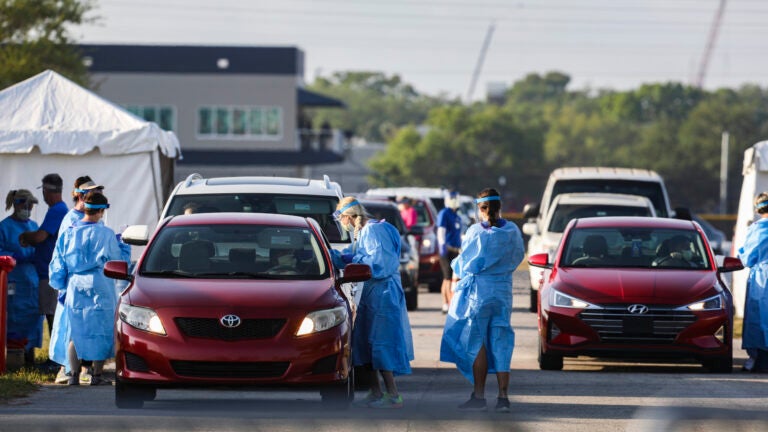