Thousands of U.S. hotels have volunteered to help local authorities house doctors, nurses and other medical personnel at reduced rates – or even free – during the covid-19 pandemic.

President Donald Trump’s White House has praised these efforts. But so far, none of Trump’s own hotels are known to be participating.

In five U.S. cities where Trump’s company operates large hotels – New York, Chicago, Miami, Washington and Honolulu – local authorities said that the Trump hotel was not involved in their efforts to provide low-cost or no-cost rooms to those fighting the virus.

“They did not volunteer, and we did not ask them,” said Frank Rollason, the head of emergency management for the fire department in Miami-Dade County, Florida. That county is home to Trump’s Doral resort.

Rollason said the county has rented out two hotels, and is negotiating with five more, to pay them $35 per room per night to house both first responders and homeless people during the pandemic. Rollason said some hotels have also offered to donate rooms, but Doral was not among them.

Trump’s company, which the president still owns, did not respond to questions this week. It is possible that the company has offered hotel rooms to medical personnel in private transactions, without involving local officials.

The Trump Organization has no legal obligation to house medical personnel during the pandemic. If it did, it would be taking on an extra financial burden – filling its hotels with low-paying or nonpaying guests – at a time when it is already facing a huge drop-off in revenue. In all five cities, only a small fraction of local hotels are participating in these programs.

But – by staying out of these programs – Trump’s company could be missing a chance to lead by example, embodying the sort of sacrifice that Trump has praised in others.

“Thank you to hotels around the country for providing healthcare workers and first responders a place to stay while they’re on the front lines of the pandemic,” the White House’s Twitter account wrote on April 5.

That tweet exemplified the contrast between Trump’s words and the Trump Organization’s actions. In the tweet, the White House linked to a story about Hawaii’s program – dubbed “Hotels for Heroes” – which has put medical personnel up in 33 hotels around the state.

There is a Trump hotel in Hawaii, which another company owns and pays Trump’s company to operate. The Trump hotel is not part of the program, said Marisa Yamane, a spokeswoman for the Hawaii Tourism Authority. The hotel’s owner did not respond to a request for comment.

The Trump hotel in Hawaii is closed, having voluntarily shut down last month – after travel limits slowed tourism to a trickle, but before the Hotels for Heroes program began. The Trump hotel told the state that it had “temporarily furloughed” 226 employees.

It’s possible that Trump’s company is abstaining from these programs because it is concerned about violating the Constitution’s emoluments clauses, which prohibit presidents from taking payments directly from states.

But Trump has argued in legal filings that the clauses are meant to ban bribes, not business transactions. And his companies have previously charged state governments: in 2017, for instance, then-Maine Gov. Paul LePage, a Republican, spent $22,000 in state money at Trump’s D.C. hotel. Also, Trump’s company could get around the clauses by giving away rooms free – as some other hotels have done.

These are difficult times for the Trump Organization, which operates 24 hotels and clubs around the world. Now, 18 of those properties are shut down – by choice, or by government order. The shuttered properties once produced hundreds of thousands of dollars in revenue per day, according to Trump’s financial disclosures. Now, some have already been closed for weeks.

So far, Trump’s properties have laid off or furloughed more than 2,500 employees, according to government filing and people familiar with their operations. The largest furloughs were at Doral, Trump’s biggest U.S. moneymaker.

After that resort shut down in March, to comply with county lockdown orders, 560 people were laid off, according to government filings. In those filings, Trump’s club called the virus a “natural disaster’ and an “unforeseen calamity.”

Last month, Trump’s company was barred from receiving loans or investments as part of a $2 trillion bailout program run by the Treasury Department. “Those of us who write the law shouldn’t benefit from the law,” Senate Minority Leader Chuck Schumer, a Democrat, said at the time.

The pandemic has been a calamity for the entire U.S. hospitality industry. The data-analysis firm STR said this week that hotel occupancy is at 21% – down from 91% at the same time last year.

But some hotel chains have still offered up their rooms to medical personnel – seeing a chance to keep employees working and to help medical personnel self-isolate. And, perhaps, to be noticed doing a good deed. Hilton, for instance, said it has partnered with American Express to offer up to 1 million room-nights free. Marriott offered reduced rates at some of its hotels

In New York, the Four Seasons near Trump Tower first shut down for the virus, then reopened to offer 225 rooms to medical personnel.

“They need a place close to work where they can rest and regenerate,” said Ty Warner, the Beanie Baby billionaire who is now owner of that Four Seasons, in a press release earlier this month. “I heard Governor [Andrew] Cuomo’s call to action during one of his press conferences, and there was no other option for us but do whatever we could to help.”

The American Hotel and Lodging Association has said that 15,000 U.S. hotels have offered to house medical personnel during the pandemic. The association declined to give the names of the hotels, or to say if any of Trump’s properties were among them.

To see if Trump’s hotels were participating, The Post reached out to the Trump Organization and to authorities in five cities that have both a Trump hotel and a hotels-for-medical personnel program (Trump also operates a small hotel in rural Virginia, far from any hospitals, and a hotel in Las Vegas, where a county spokeswoman said there is no official hotel-rooms-for-medical-personnel program).

Trump’s hotel in midtown Manhattan is still open, but not on either list.

In Chicago, the city has reserved more than 1,100 rooms at five hotels, to house both medical personnel and people with mild cases of covid-19. The city is paying rates as much as $175 per night, according to media reports, though a city spokeswoman said the rate varies from hotel to hotel.

Trump’s hotel in Chicago is also open, but it is not part of the program, a city spokesman said. The hotel recently reported laying off 294 workers, according to state filings.

In Washington, D.C., the city is using three hotels to house medical workers, according to a city official. Trump’s hotel is not among the three, the city official said.

That Trump hotel is also still open, but it has laid off 237 workers.

All three of these Trump hotels have not dropped their prices significantly, despite the pandemic. On their websites Thursday, the cheapest rooms available for the next night cost $267 at Trump Chicago, $316 at Trump Washington, and $525 at Trump’s hotel in New York.

The Washington Post’s Jonathan O’Connell contributed to this report. 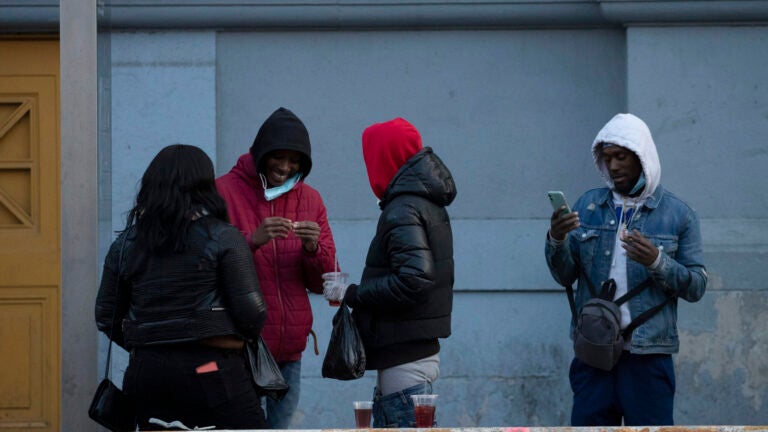