WASHINGTON – President Donald Trump on Monday berated the nation’s governors on a conference call, describing them as “weak” in the face of growing racial unrest and urged them to try to “dominate” unruly protests, according to three people on the call who spoke on the condition of anonymity to discuss the private conversation.

Trump also called on the governors to take back the streets and use force to confront protestors and said if they did not, they would look like “fools,” alarming several governors on the call as they communicated privately, according to the officials.

“If you don’t dominate you’re wasting your time,” Trump said according to a person on the call.

Trump told the governors that “you have to use the military” and “we have a wonderful military,” said this person, and he mused about Occupy Wall Street movement and said it was a “disgrace” that was ended by governors and mayors being tough.

The president said that people arrested at the protests should serve a 10-year prison sentences, according to another person familiar with the call.

Pockets of the United States have descended into chaos in recent nights — after days of mass demonstrations over the death of another black man in police custody. Many of the protests have featured violent clashes with the police as well as the destruction of private property and looting.

Trump has remained mostly silent on the issue beyond his Twitter account, where he as at times sent out tweets that were more inflammatory than calming during the unrest.

He addressed the killing of George Floyd in Minneapolis on May 25 during remarks in Florida Saturday, where he was on hand celebrate the successful launch of U.S. astronauts into space.

“Yesterday I spoke to George’s family and expressed the sorrow of our entire nation for their loss. I stand before you as a friend and ally to every American seeking justice and peace,” he said before moving on to address the successful rocket launch. “Healing, not hatred, justice, not chaos, are the mission at hand.”

Those remarks stood in contrast to many of his tweets, which were more belligerent in nature.

“I was inside, watched every move, and couldn’t have felt more safe,” the president tweeted Saturday morning about protest outside the White House on Friday night. “They let the ‘protesters’ scream & rant as much as they wanted, but whenever someone have been greeted with the most vicious dogs, and most ominous weapons, I have ever seen.”

The protests grew so heated Friday night outside the White House that the Secret Service rushed the president to an underground bunker previously used during terrorist attacks.

He expressed support on May 1 for armed protesters who had stormed the Michigan Capitol, demanding the state lift coronavirus restrictions. Trump tweeted Friday that “these are very good people, but they are angry. They want their lives back again, safely!” 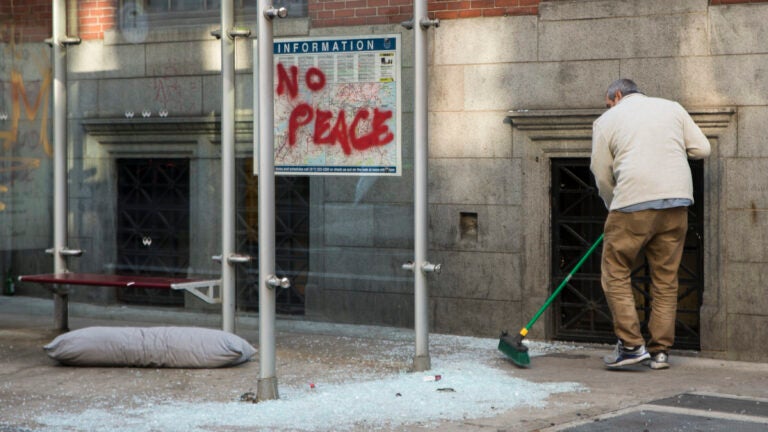 Photos: See the destruction in the wake of Sunday’s violence as the cleanup begins