“What did I tell you?” a voice cried out as the camera recording mayhem in downtown Pittsburgh settled on a white man, clad in all black, smashing the windows of a police vehicle.

“It is not black people,” the onlooker called to the crowd before addressing the vandal directly: “What are you doing?”

What he was doing, authorities later alleged, was inciting riots on Saturday as the city – like dozens of others across the United States – was swept up in sustained unrest over the death of a black man in police custody. Demonstrations have spread from Minneapolis, where a white police officer pinned his knee on the neck of George Floyd, to scores of cities, some of which have been looted and set ablaze.

Police identified Brian Jordan Bartels, 20, of Allison Park, Pennsylvania, as having “kicked off” the escalation in Pittsburgh, one of several examples of peaceful assemblies against police violence creating opportunities for pandemonium. While at heart the gatherings have been an appeal for racial justice, they also have attracted a diverse array of people with other grievances and agendas who have co-opted the moment, accelerating what has been a national unraveling as the country reels from a pandemic that has put more than 40 million people out of work.

In most American cities, people of all races appear to be participating in the violence, vandalism and looting, particularly in Minneapolis, where a crowd burned the police department’s 3rd Precinct building last week and where vandals were seen smashing windows and stealing items from stores. Multiracial coalitions also have marched peacefully. But in some cities, local officials have noted that black protesters have struggled to maintain peaceful protests in the face of young white men joining the fray, seemingly determined to commit mayhem.

In footage that spread widely online, a man identified as Bartels, who faces charges of vandalism and rioting, wore a bandanna emblazoned with the symbol of the Animal Liberation Front, a leaderless international resistance movement that pushes for animal rights. In the footage, he raised his middle fingers to black protesters who begged him to stop. At Bartels’ home in a Pittsburgh suburb, officers found spray paint and firearms, according to an arrest warrant reviewed by The Washington Post.

#BREAKING NEWS: Pittsburgh Police say 20 year old Brian Bartels is the man who incited riots in downtown #Pittsburgh yesterday. This is video taken of him destroying a police cruiser. An arrest warrant has been issued. https://t.co/AFYsrV2vsD

Attempts to reach Bartels, who turned himself in to police on Monday evening, were unsuccessful.

As authorities intensified their efforts to quell the uprisings – deploying tear gas and rubber bullets in aggressive spasms in many cities – police officers were joined by some elected officials and protest organizers in accusing white activists and extremists of exacerbating the chaos by blocking roadways, destroying police property and lobbing bricks into businesses.

“We came together as Pittsburghers and supported a First Amendment right to gather and say more must be done,” Pittsburgh Mayor Bill Peduto, a Democrat, told reporters over the weekend. “And then it was hijacked.”

Some local officials were even more blunt. After reviewing footage of the weekend’s events, Jenny Durkan, the mayor of Seattle, said she feared the black community would shoulder the blame for havoc others caused.

“It is striking how many of the people who were doing the looting and stealing and the fires over the weekend were young white males,” Durkan, a Democrat, said in an interview.

President Donald Trump on Monday evening said in a Rose Garden address that he stands with demonstrators who condemn Floyd’s death. As he spoke, peaceful protesters were cleared with flash-bang explosives and tear gas so he could travel pose for a photograph in front of St. John’s Episcopal Church nearby.

“These are not acts of peaceful protest; they are acts of domestic terror,” said Trump, who earlier Monday encouraged governors to “dominate” the streets with the militaristic tactics already in use in parts of the country.

Violence had erupted in some of the early demonstrations starting last week, with protesters in Minneapolis setting several businesses on fire along with the police precinct.

But from Baltimore to Sacramento, California, black protesters also were filmed protecting storefronts and placing their bodies before police barricades to preserve principles of nonviolence, and to prevent backlash disproportionately aimed at them. Videos emerged, too, of them confronting white demonstrators who had usurped the mantra of “black lives matter,” which gave birth to a movement for racial justice and police accountability, in seemingly random acts of defacement.

“Don’t spray stuff on here when they’re going to blame black people for this,” a black woman admonished two vandals outside a Starbucks in Los Angeles.

In East Liberty, a gentrifying neighborhood of Pittsburgh, a young black protester delivered a case of bottled water to a phalanx of police officers standing guard at a demonstration on Sunday outside of a Target store.

This was how the peaceful protest in East Liberty concluded with one of the organizers giving the state police water that was donated to protesters. #pittsburgh #target pic.twitter.com/5GGgSu0vfZ

“With all this stuff going on, I just wanted to spread the positivity,” said Alexander Cash, 23, who lost his job at a nearby Residence Inn because of the novel coronavirus pandemic. “It doesn’t matter if it’s one or 45 cops standing there. I can walk up to them and still be peaceful.”

That sort of caution was being undermined by intentionally destabilizing acts, warned Tim Stevens, a longtime civil rights activist in Pittsburgh.

“People who do not have the social justice commitment at heart, people who really don’t care about George Floyd – they care only about an opportunity to cause disruption – how many of those people were in Pittsburgh over the weekend?” he asked. “How many were out across America?”

Similar questions have become acute from Austin, Texas, where a racial justice group on Sunday canceled a planned assembly for fear of violent escalation by unaffiliated activists, to Fargo, North Dakota, where police questioned four men carrying assault rifles to a protest site in a bid to protect businesses. In Denver, police officers commandeered firearms from anti-government gun enthusiasts who self-identify as “Boogaloo boys,” part of a far-right militia movement.

“These are people who are agent provocateurs,” Chas Moore, the executive director of the Austin Justice Coalition, said of the extremists joining the protests. He canceled his group’s demonstration, originally planned for Sunday, after the chaos of Saturday night. “These are extremists and anarchists, not right or left. They want complete annihilation of the system, and they’re at the forefront of the fires and the breaking of vehicles.”

Others warned against tagging certain bad actors for responsibility, especially after Minnesota officials at first tried to lay blame for damage on out-of-state protesters, allegations that did not find support in arrest records. Over the weekend, Melvin Carter, the mayor of St. Paul, Minnesota, walked back comments initially asserting that “every person” detained in protests came from other states. In fact, data showed nearly all of those arrested gave addresses in Minnesota.

Durkan said the age profile of those arrested in Seattle skewed young, and she pledged to examine the demographics more closely. Officials in Pittsburgh and Austin said they did not break down arrest data by race, making it difficult to discover whether claims of culpability were reflected in on-the-ground enforcement efforts.

“It’s very easy for the government to create this binary of good protesters and bad protesters, and it always fits their whim,” said Rashad Robinson, the president of the racial justice group Color of Change. The dilemma, Robinson said, is how to welcome new faces to the fold without inviting chaos: “We are in a really complicated moment, and we have a lot more questions.”

The complexity was deepened when Trump, with Attorney General William Barr’s backing, faulted anarchists and left-wing activists for the upheaval without providing evidence.

On Monday, the president’s allies trumpeted news of the charges against Bartels, a day after the president said he would designate an anti-fascist collective known as antifa as a “terrorist organization,” though he has no apparent legal authority to do so.

A former friend of Bartels who corresponded with him for several years before they had a falling out in May said Bartels never mentioned antifa, some of whose adherents favor aggressive tactics.

The friend, a 17-year-old who spoke on the condition of anonymity because she feared online harassment, said Bartels was militant about veganism but otherwise espouses views that do not fall neatly along ideological lines. Another teenager who moved in the city’s pop-punk scene with Bartels said Bartels loathed establishment forces, no matter their partisan makeup. But neither understood why Bartels would have smashed a police vehicle in broad daylight, as police accuse him of doing.

In downtown Austin, a crowd of several hundred protesters massed outside Austin Police Department headquarters on Sunday evening. With their numbers increasing, protesters eventually streamed over a concrete embankment and onto Interstate 35, a thoroughfare that slices Austin along racial and economic lines.

The crowd was a diverse mix of black, white and Hispanic demonstrators, but it was the young white protesters who seemed to push the limits. As the crowd walked south to an exit, white protesters were spray-painting the asphalt and a concrete median.

One white woman was observed applying an adhesive to a traffic cone in an attempt to adhere it to the roadway while a black protester walked by, turning his head in apparent surprise. Later in the evening, white protesters threw plastic water bottles at police, drawing rebuke from some black members of the crowd.

“The police are targeting black protesters out here with rubber bullets,” said Maredith Drake, 43, who had been offering first aid to injured protesters all weekend. “We think they feel like they’ll be less accountable if they shoot a black person instead of a white one.”

On Chicago’s West Side, a liquor store was looted for hours and then torched at about 9 p.m. Sunday. The air was filled with blinding smoke as Glenn Johnson, 45, stood in the doorway of his graphic design business across the street, saying he had watched looters so committed to the undertaking that they worked in crews of three, each completing a specific task. Most cars had out-of-town license plates, he said.

“I don’t condone this, but I don’t condemn it,” Johnson said. “I understand where it’s coming from. But the thing is, we’re so far into this, everything is going to be gone.” 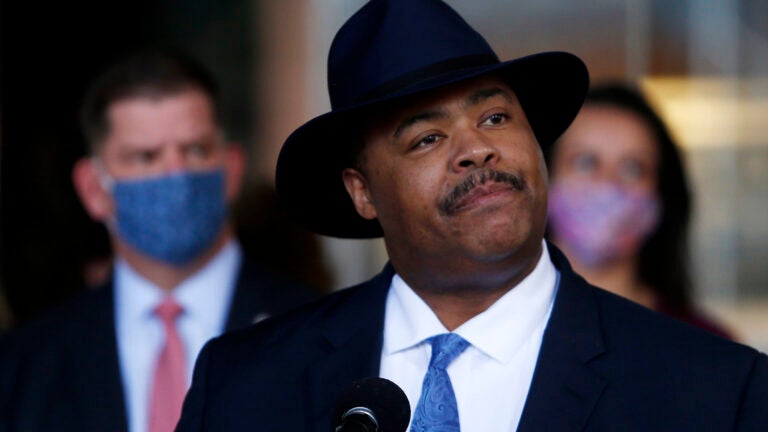 ‘Not with a peaceful intent’: Boston police commissioner says some were ‘hellbent’ on destruction after protests