Disney fans are urging the theme park operator to rethink Splash Mountain, a log flume ride based on a nearly 75-year-old movie that has long been criticized for racist themes.

The company has been distancing itself from its controversial 1946 film “Song of the South” for decades now. The movie, set on a plantation after the Civil War, is not included on the new streaming service Disney Plus. And former Walt Disney CEO Bob Iger, now executive chairman, says it won’t ever be.

“I’ve felt as long as I’ve been CEO that ‘Song of the South’ – even with a disclaimer – was just not appropriate in today’s world,” Iger said in March during a shareholder meeting. “It’s just hard, given the depictions in some of those films, to bring them out today without in some form or another offending people, so we’ve decided not to do that.”

Given that, advocates of the change say it’s time the film’s fingerprints be wiped from the company’s theme parks as well. The ride can be found at the Florida, California and Tokyo resorts. Disney plans to reopen its domestic parks next month after closing them because of the coronavirus pandemic.

The push to give the ride a new theme has gained traction on social media and in Change.org petitions in the past week amid a broader national conversation – and massive protests – around racism and injustice sparked by the death of George Floyd. Four former Minneapolis police officers have been charged in connection with his death.

The demonstrations have prompted the toppling of Confederate monuments and a NASCAR ban on the Confederate flag, and HBO Max removed “Gone With the Wind” from its platform to add context about its treatment of slavery and racist portrayals of characters.

“I think it’s important that our generation and future generations see such an influential company remove a ride that oppresses black culture, and replace it with a ride that celebrates black culture,” wrote the creator of a petition that had gained nearly 3,400 signatures as of Thursday afternoon.

Another petition, which has racked up more than 9,600 signatures, similarly argues that the ride should be remade to revolve around “The Princess and the Frog,” an animated film set in New Orleans that features Disney’s first black princess.

“The framing of the ride is such that it could be easily changed to tell the story of Tiana while not compromising too much of the ride/costing a fortune in remodeling for Disney,” the petitioner wrote. “This change could kill two birds with one stone, remove the offensive stereotypical theming the ride currently has and bring a much needed diversity to the parks.”

One man posted a video of the ride set to music from “The Princess and the Frog” on YouTube. A Twitter user who described himself as a Disneyland cast member and parks aficionado said he had been imagining a re-theme for years and posted details on Twitter. Detractors argued that the company shouldn’t redo a classic.

Representatives for Disney did not immediately respond to questions about the efforts.

Josh Young, editor in chief of Theme Park University, which covers themed entertainment, first wrote about the idea of changing the ride in 2017. He said Thursday he was surprised it had taken this long for momentum to grow; the ride opened in 1989 in California and 1992 in Florida.

Young said he doesn’t believe Disney would build a ride today based on “Song of the South.”

“More importantly,” he said, “does that mean that they will change things?”

He pointed out that the Pirates of the Caribbean ride had been changed over the years to tweak a scene where pirates chased women and to remove a “bride auction” and add a female pirate.

“Just because it was built then doesn’t mean they didn’t realize there were things they needed to go back and change today,” Young said. 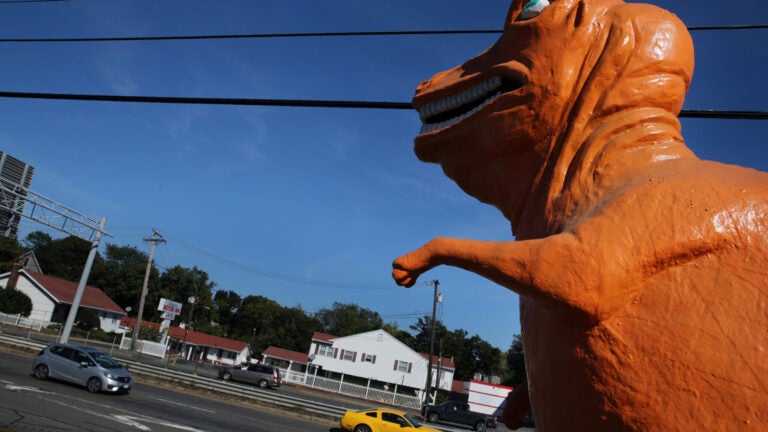 A petition to replace the Christopher Columbus statue with the Route 1 orange dinosaur is gaining steam, sort of