The governor of Kansas has called on a Republican county chairman to remove a cartoon from his newspaper’s Facebook page that invokes the Holocaust to criticize her order requiring Kansans to wear masks to prevent the spread of the coronavirus.

The cartoon, posted on the Facebook page of The Anderson County Review, shows the state’s Democratic governor, Laura Kelly, wearing a mask emblazoned with the Star of David against a backdrop of people being loaded onto a cattle car.

“Lockdown Laura says: Put on your mask … and step onto the cattle car,” reads a caption on the cartoon, which was posted Friday, the same day an order by Kelly went into effect requiring Kansans to wear masks in public spaces and in places where social distancing is not possible.

“Political editorial cartoons are gross over-caricatures designed to provoke debate and response — that’s why newspapers publish them — fodder for the marketplace of ideas,” he wrote in an email. “The topic here is the governmental overreach which has been the hallmark of Governor Kelly’s administration.”

He scoffed at the idea of an apology.

“Apologies: To whom exactly?” he wrote. “The critics on the Facebook page? Facebook is a cesspool and I only participate to develop readership.” He added that he “intended no slight” to Jews or Holocaust survivors.

Kelly said the cartoon should be taken down.

“Mr. Hicks’ decision to publish anti-Semitic imagery is deeply offensive and he should remove it immediately,” she said in a statement. “While it’s disappointing to see, on July Fourth of all days, I know that Mr. Hicks’ views are not shared by the people of Anderson County nor Kansas as a whole.”

“Mr. Hicks’ recent post is a vile attempt to mislead Kansans and an embarrassment for our entire state,” the party’s executive director, Ben Meers, said in a statement. “It has been extremely disappointing to see Republican leadership in Kansas politicize the current public health crisis to promote their own agenda.”

The Kansas Republican Party and its chairman did not immediately respond Saturday to messages seeking comment.

Rabbi Moti Rieber, executive director of Kansas Interfaith Action, said the cartoon was “an absurdly extreme version of the hyperbolic reaction we’ve seen to measures taken to address the virus.”

“The use of Holocaust imagery to make a political point is almost never acceptable,” he said. “Kelly is taking action to save lives, so to compare it to mass murder is odious.”

Masks have become, for some, a divisive cultural flashpoint, despite evidence that they are a simple and effective way to help prevent the transmission of the virus. Particularly on the right, the decision not to wear a mask has become a rebellion against what some regard as an incursion on personal liberty.

In May, an emergency proclamation in Stillwater, Oklahoma, requiring face coverings led to so much verbal abuse in its first three hours — and a threat involving a gun — that officials swiftly amended it. Masks there became encouraged, not required.

The Anderson County Review’s cartoon was posted as the pandemic continues to rage in many parts of the country, with cases trending upward in 39 states, including Kansas, and regularly reaching new single-day records.

Nationwide, more than 53,000 new daily cases were reported in the United States on Friday, according to a New York Times database. That figure exceeded all previous daily counts aside from the 55,595 new cases Thursday, the first time the number passed 50,000.

In Kansas, the number of cases has increased over the last two weeks. At least 15,919 cases and 277 deaths have been recorded statewide, according to the Kansas Department of Health and Environment.

The Anderson County Review calls itself Kansas’ eighth oldest continuously publishing newspaper, serving the communities of Anderson County since 1865. Published weekly, it has a circulation of 2,117, according to the Kansas Press Association. 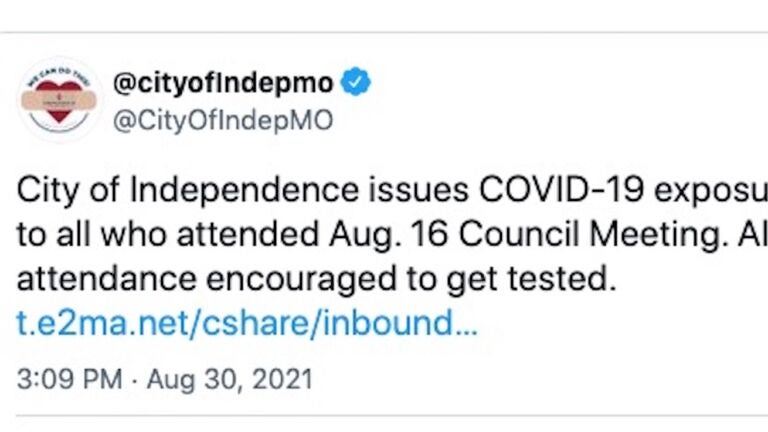 Missourians packed into a city council meeting to fight a mask mandate. One of the attendees now has COVID.