PORTLAND, Ore. – A thick wall of tear gas crept closer to the wall of moms in yellow shirts chanting, “Don’t shoot your mother,” as they faced off with federal agents during another night of nonstop protests.

As the gas enveloped the group late Tuesday, some began to cough. One mom ripped off her goggles in frustration – they didn’t seal around her eyes and the burning gas had seeped in. She rubbed her face and let out a groan, but she didn’t leave. Neither did hundreds of other self-identified moms who showed up at the latest round of protests to stand, arms linked, between armed federal agents and demonstrators.

In front of the federal courthouse, federal agents in tactical gear used batons to push back the moms in bike helmets. Dozens were tear-gassed. Some were hit with less-lethal bullets fired into the crowd.

The fledgling collective, formed less than a week ago, has dubbed itself the Wall of Moms — and new chapters have already formed in cities around the country from St. Louis to New York, Chicago to Philadelphia and even in the nation’s capital. The groups have organized in anticipation of a national deployment of federal law enforcement personnel to Democratic-led cities — a nascent plan President Trump announced he was putting into action earlier this week.

Trump has defended his administration’s use of force in Portland, where officers from various federal agencies have clashed nightly with protesters, made arrests and pulled demonstrators in for questioning in unmarked cars. The president called the protests in Portland, a liberal Pacific Northwest city, “worse than Afghanistan.”

Mayors, members of Congress and state officials have pushed back, telling the federal government they do not want or need federal troops in their cities. Portland’s Democratic Mayor Ted Wheeler has for days called for the immediate removal of federal troops.

Now, the moms are getting involved.

Many of the mothers say they were summoned when George Floyd, a Black man who died in police custody in Minneapolis in May, cried out for his mother with his last breaths.

“When you’re a mom you have this primal urge to protect kids, and not just your kids, all kids,” said Wall of Moms organizer Jennie Vinson, 43. “To see a grown man reaching out and calling for his mother — I think that was a transformational moment for so many of us. It’s like: What choice do we have but to do this?”

Angie Noriega, 43, attended her first protest on Monday with a group of seven other mothers who piled into two minivans and drove downtown. Noriega, a health-care worker who has two Black children, ages 3 and 7, said after weeks of avoiding attending protests in person due to the coronavirus pandemic, seeing the moms of Portland mobilize inspired her to get more involved.

“It’s been such a struggle to balance being afraid, but wanting to do the right thing for my kids,” she said, her voice cracking with emotion. “I want to be a role model for them, someone they can be proud of. But I also want to make it home safely.”

Before she left home, Noriega’s 7-year-old daughter begged her not to leave. She’s old enough to understand the risks of facing off with heavily armed police officers, Noriega said.

“But we talked about that and I said, ‘Sometimes we have to be brave and do the right thing even when it feels scary,'” Noriega said.

As Rachel Weishaar, 34, was preparing to leave her home on Tuesday, she said, her 3-year-old offered this wish for her mother’s safety: “Tell the police officers to be more gentle,” the girl said.

Weishaar carried her daughter’s words on a sign she held outside the federal courthouse.

The night before, hundreds of moms joined to sing a lullaby outside the Multnomah County Justice Center, the site of the county jail and police headquarters. The lyrics were simple: “Hands up, please don’t shoot me.”

Though the Wall of Moms has become an overnight Internet sensation, the group has also attracted skepticism. Some scholars and racial justice activists have criticized the group and the attention it has attracted for centering the voices of mostly white mothers.

Black mothers have been calling for criminal justice reform and racial equity for many years. They have lost sons and daughters at the hands of police. A group of seven mothers who have lost African American children to police action or gun violence, known as the Mothers of the Movement, have toured around the United States to protests and conferences. But they have never gone viral quite like the Wall of Moms.

Wall of Mom organizers said they want to help amplify the voices of mothers like these — mothers who have suffered losses and who have for years fought for systemic change in police practices.

“When you have the privilege that we have as white women, you have to use it for good, and I hope that that’s what this is,” said Vinson, who is white. “I think it’s really, really important that we gain the trust of the Black community here and that’s going to take some work, because we haven’t always been dependable. We have an obligation to be humble, to listen and center Black voices.”

Vinson, a cancer survivor who joined about 50 other moms at their first rally on Saturday night, said the moms continue to show up for as long as the protests go on.

She was joined Tuesday by her husband, Scott Vinson, 42, donning an orange T-shirt that has been adopted as the uniform for Portland’s emerging dad activists, known collectively as the PDX Dad Pod or DadBloc.

While the moms chanted and sang in the face of wafting tear gas, a dad in orange strolled toward the cloud of gas with a leaf blower slung over his right arm. He turned it on and blew the fumes away, back toward advancing law enforcement officers.

The moms cheered, waving sunflowers and peace signs into the night. 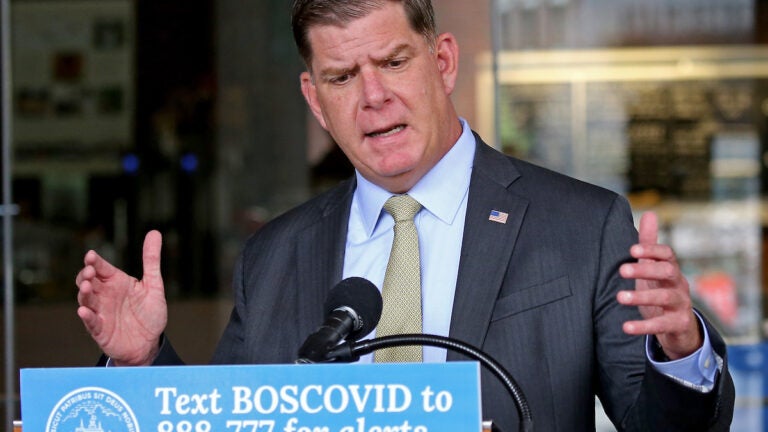