AUSTIN, Texas — It was not unusual for Garrett Foster to be at a protest against police brutality on a Saturday night. And it was not out of character for him to be armed as he marched.

Foster was carrying an AK-47 rifle as he joined a Black Lives Matter demonstration blocks from the state Capitol in Austin, Texas. Gun-rights supporters on both the left and the right often carry rifles at protests in Texas, a state whose liberal gun laws allow it.

Foster, wearing a black bandanna and a baseball cap, bumped into an independent journalist at the march Saturday, and he spoke matter-of-factly about the weapon that was draped on a strap in front of him.

“They don’t let us march in the streets anymore, so I got to practice some of our rights,” Foster told the journalist, Hiram Gilberto Garcia, who was broadcasting the interview live on Periscope. “If I use it against the cops, I’m dead,” he conceded.

Later that night, Foster was fatally shot, but not by police. Authorities said he was killed by a motorist who had a confrontation with protesters.

Today, I talked to the mothers of Garrett Foster, the man shot and killed last night at the protest in Austin, and his fiancee Whitney Mitchell.

The couple met in North Texas when they were teens. Foster cared for Mitchell, a quadruple amputee, full-time.https://t.co/rqhjZgLgiF pic.twitter.com/ptHaf7qmPa

Police and witnesses said the man in the car turned it aggressively toward the marchers, and Foster then approached it. The driver opened fire, shooting Foster three times. He was rushed to a hospital and was later pronounced dead.

Austin’s police chief, Brian Manley, told reporters Sunday that as the motorist turned, a crowd of protesters surrounded the vehicle, and some struck the car. The driver, whose name has not been released, then opened fire from inside the car as Foster approached. Another person in the crowd pulled out a handgun and shot at the vehicle as it sped away.

Minutes after the shooting, the driver called 911 and said he had been involved in a shooting and had driven away from the scene, Manley said. The caller told dispatchers he had shot someone who had approached the driver’s window and pointed a rifle at him.

“His account is that Mr. Foster pointed the weapon directly at him and he fired his handgun at Mr. Foster,” the chief said of the driver.

Both the driver and the other person who fired a weapon were detained and interviewed by detectives. Both had state-issued handgun licenses and have been released as the investigation continues, Manley said.

The shooting stunned a capital city where demonstrations and marches are a proud and commonplace tradition. A GoFundMe page to help Foster’s relatives with his funeral expenses had raised nearly $100,000 by Sunday evening.

And while Mayor Steve Adler and other officials expressed their condolences Sunday, at least one police leader criticized Foster.

On Twitter, Kenneth Casaday, president of the Austin police officers’ union, retweeted a video clip of Foster explaining to Garcia, the independent journalist, why he brought his rifle. In the clip, Foster is heard using curse words to talk about “all the people that hate us,” but are too afraid to “stop and actually do anything about it.”

In his tweet, Casaday wrote: “This is the guy that lost his life last night. He was looking for confrontation and he found it.”

Garcia, who has filmed numerous Austin demonstrations in recent weeks, captured the chaotic moments of the shooting live on video. Protesters are seen marching through an intersection when a car blares its horn. Marchers appear to converge around the car as a man calls out, “Everybody back up.” At that instant, five shots ring out, followed shortly by several more loud bangs that echo through the downtown streets.

Foster, who had served in the military, was armed, but he was not seeking out trouble at the march, relatives and witnesses told reporters. At the time of the shooting, Foster was pushing his fiancee through the intersection in her wheelchair.

Foster and his fiancee, Whitney Mitchell, had been taking part in protests against police brutality in Austin daily since the killing of George Floyd in Minneapolis. Foster is white, and Mitchell, who is a quadruple amputee, is African American. She was not injured in the shooting.

“He was doing it because he feels really strongly about justice and he’s very heavily against police brutality, and he wanted to support his fiancee,” Foster’s mother, Sheila Foster, said in an interview with “Good Morning America,” adding that she was not surprised he was armed while at the march.

“He does have a license to carry, and he would’ve felt the need to protect himself,” Sheila Foster said.

In Texas, it is lawful to carry rifles, shotguns and other so-called long guns on the street without a permit, as long as the weapons are not brandished in a threatening manner; state-issued licenses are required only to carry handguns.

The presence of Foster’s weapon could play a key role in the case if the driver claims that he shot Foster out of fear for his life, a defense allowed under the so-called “stand your ground” law in the state.

The shooting reignited a long-running debate in Texas about the “open carry” movement, in which many men and women carry their rifles and other weapons in public places.

Gun-control supporters say the movement that encourages such displays seeks to intimidate police and the public, while gun-rights activists defend it as a celebration of their Second Amendment rights.

“There are multiple layers to this tragedy, but adding guns to any emotional and potentially volatile situation can, and too often does, lead to deadly violence,” Ed Scruggs, board president of Texas Gun Sense, a gun legislation reform group, said in a statement about the Austin shooting.

C.J. Grisham, founder and president of the gun-rights organization Open Carry Texas, defended the practice of bringing rifles to rallies and marches, particularly after numerous attacks around the country in which motorists have driven their cars into demonstrations and injured or killed protesters.

“Protesters are under attack from a wide variety of people,” Grisham said. “It’s unfortunate these days that if you’re going to exercise your First Amendment rights, you probably need to be exercising your Second Amendment rights as well.”

The shooting occurred shortly before 10 p.m. James Sasinowski, 24, a witness, said it seemed the driver was trying to turn a corner and did not want to wait for marchers to pass.

“The driver intentionally and aggressively accelerated into a crowd of people,” Sasinowski said. “We were not aggravating him at all. He incited the violence.”

Michael Capochiano, another witness, had a slightly different account of what happened. He said he was marching with other demonstrators when he saw a motorist honk his horn and turn toward the crowd, forcing people to scatter.

“You could hear the wheels squealing from hitting the accelerator so fast,” said Capochiano, 53, a restaurant accountant. “I’m a little surprised that nobody got hit.”

The car came to a stop after turning from Fourth Street onto Congress Avenue and appeared to strike a traffic pylon. As people shouted angrily at the driver, Garrett Foster walked toward the car, with the muzzle of his rifle pointed downward, he said.

“He was not aiming the gun or doing anything aggressive with the gun,” Capochiano said. “I’m not sure if there was much of an exchange of words. It wasn’t like there was any sort of verbal altercations. He wasn’t charging at the car.” 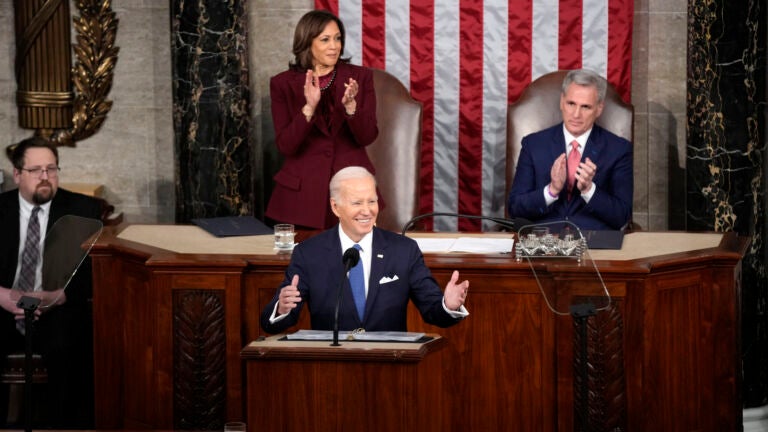