Wildfires raging in California, Oregon, and Washington have caused widespread destruction and at least three deaths, including a 1-year-old boy in northern Washington.

California has already set a record with nearly 2.3 million acres burned this year — 20 times what burned this time last year — and the worst part of the wildfire season is just beginning, according to The Associated Press.

The destructive blazes are burning in a large swath of Washington state and Oregon that rarely experiences such intense fire activity because of the Pacific Northwest’s cool and wet climate, the AP reported.

“My wife and I planned to retire here, but I’m not sure I am going to rebuild,” said Jim Murray, a Malden, Wash., resident whose home was destroyed. “I have a feeling this is going to be a ghost town now.”

Here are photos from what The New York Times called “a wildfire season of unrivaled destruction” on the West Coast. A scorched car rests in a clearing following the Bear Fire in Butte County, Calif., on Wednesday, Sept. 9. The blaze, part of the lightning-sparked North Complex, expanded at a critical rate of spread as winds buffeted the region. 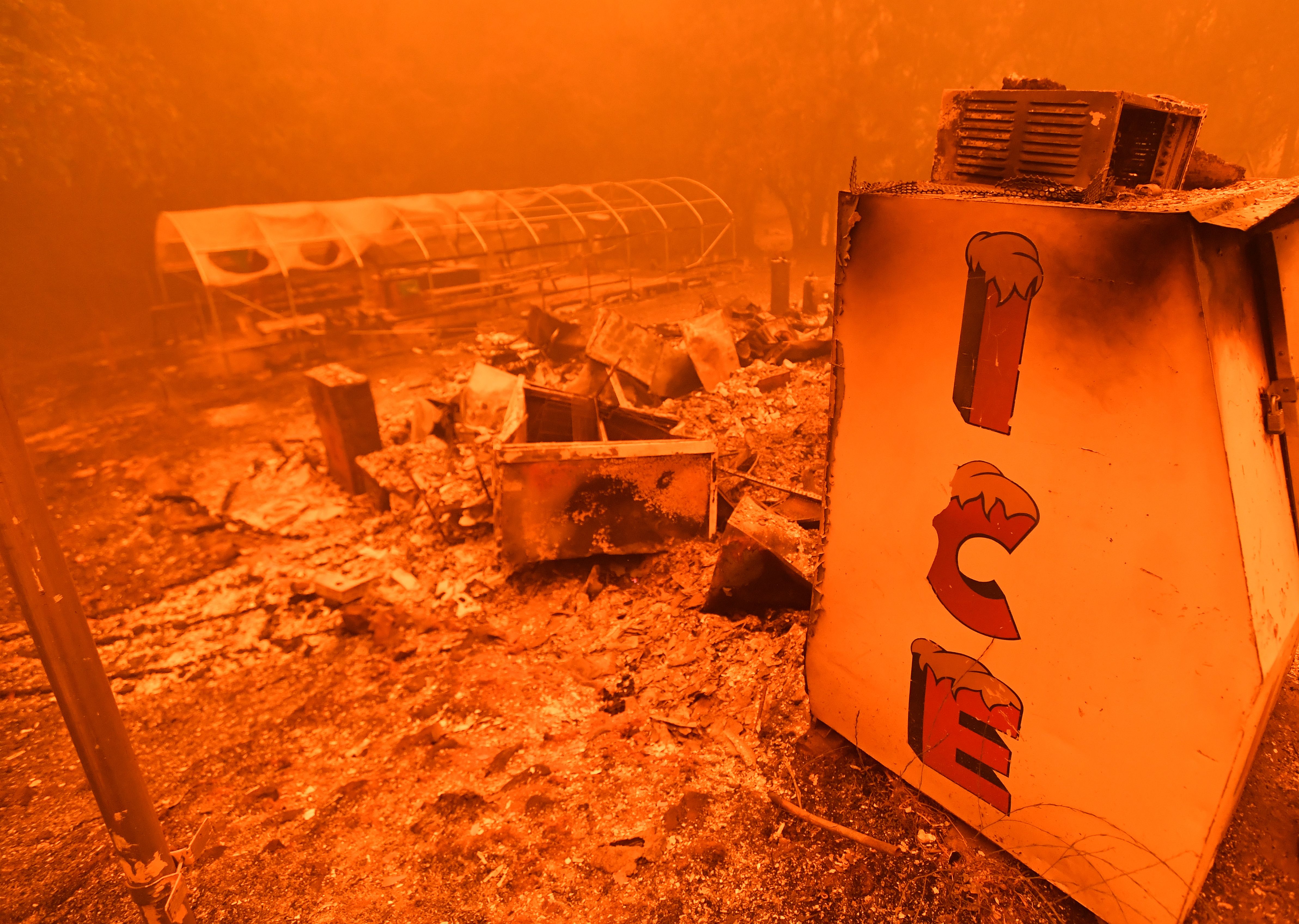 A singed ice machine at a burned store during the Bear fire, part of the North Lightning Complex fires, in unincorporated Butte County. Dangerous dry winds whipped up California’s record-breaking wildfires and ignited new blazes as hundreds were evacuated by helicopter and tens of thousands were plunged into darkness by power outages across the western United States. Firefighters as the Bear Fire approaches in Oroville, Calif. A firefighter battles the Creek Fire as it threatens homes in the Cascadel Woods neighborhood of Madera County, Calif. A firetruck drives along state Highway 168 while battling the Creek Fire in the Shaver Lake community of Fresno County, Calif. A weekend wildfire east of Fresno exploded so fast that it trapped hundreds of holiday campers who were airlifted to safety in a dramatic rescue that strained the limits of two California National Guard helicopters. Evacuees are flown to safety aboard a helicopter as a wildfire burned in the Sierra National Forest, on Saturday, Sept. 5. More than 2.2 million acres of parched lands have burned this year, a record for the state. 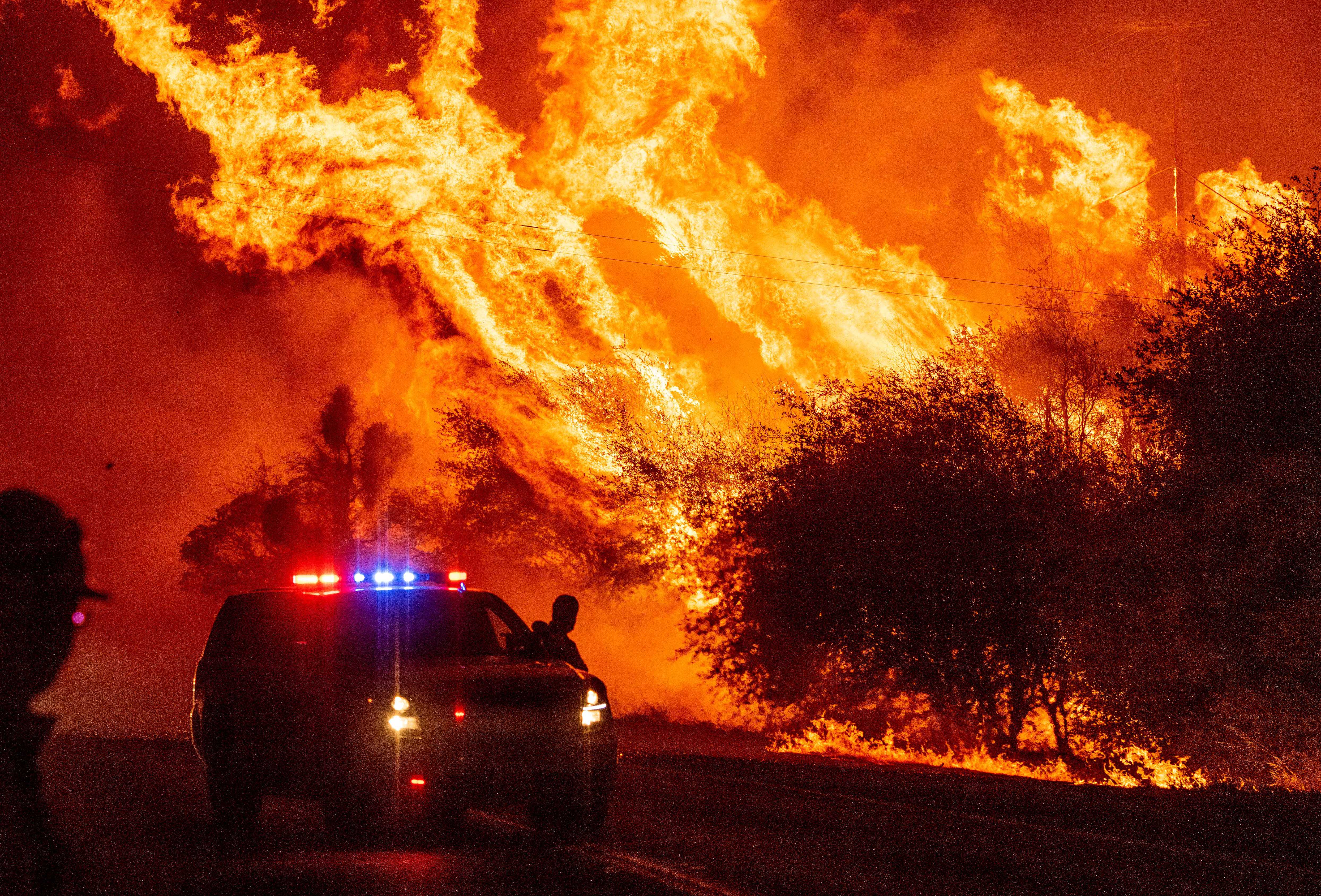 A law enforcement officer stops as flames launch into the air and fire continues to spread during the Bear Fire in Oroville, Calif., on Sept. 9. 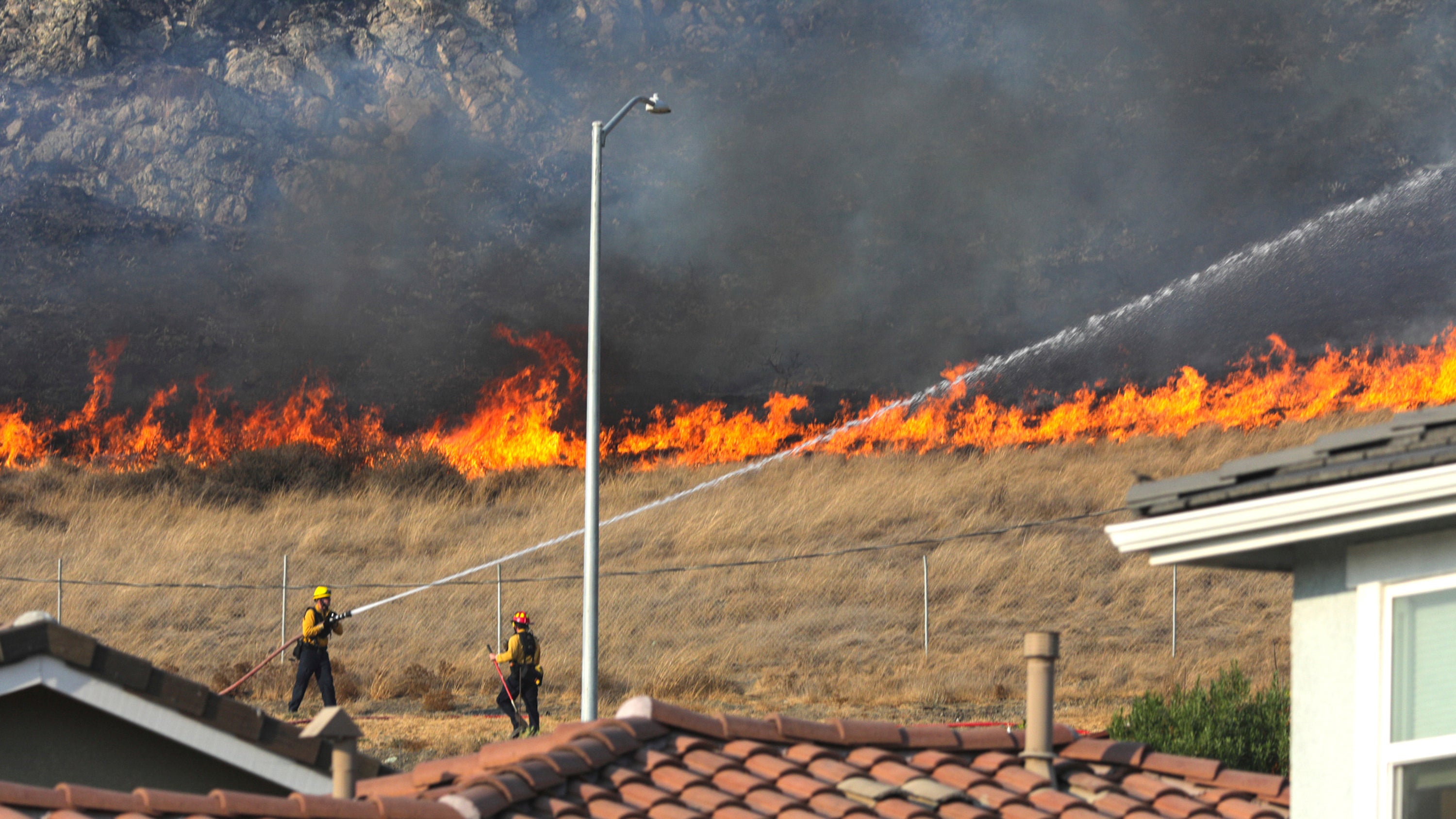 Firefighters protect homes and contain a 50-acre blaze in open space in San Luis Obispo, Calif., on Sunday, Sept. 6. Heat was a factor, and nearby Cal Poly recorded a high temperature of 120 degrees Fahrenheit. 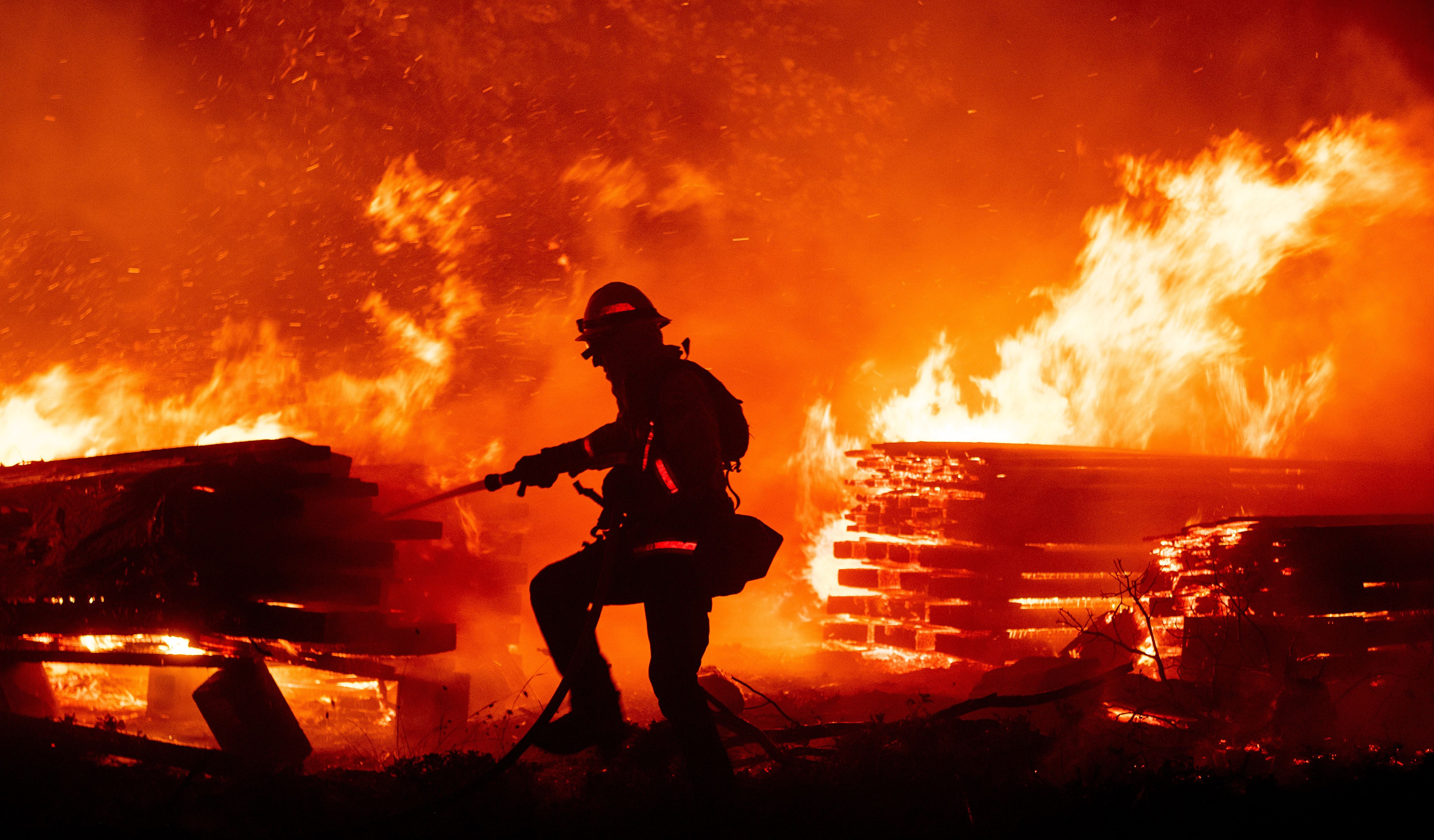 A firefighter douses flames as they push toward homes during the Creek Fire in the Cascadel Woods area of unincorporated Madera County, Calif., on Sept. 7. A firework at a gender reveal party triggered a wildfire in southern California that has destroyed 7,000 acres and forced many residents to flee their homes, the fire department said. 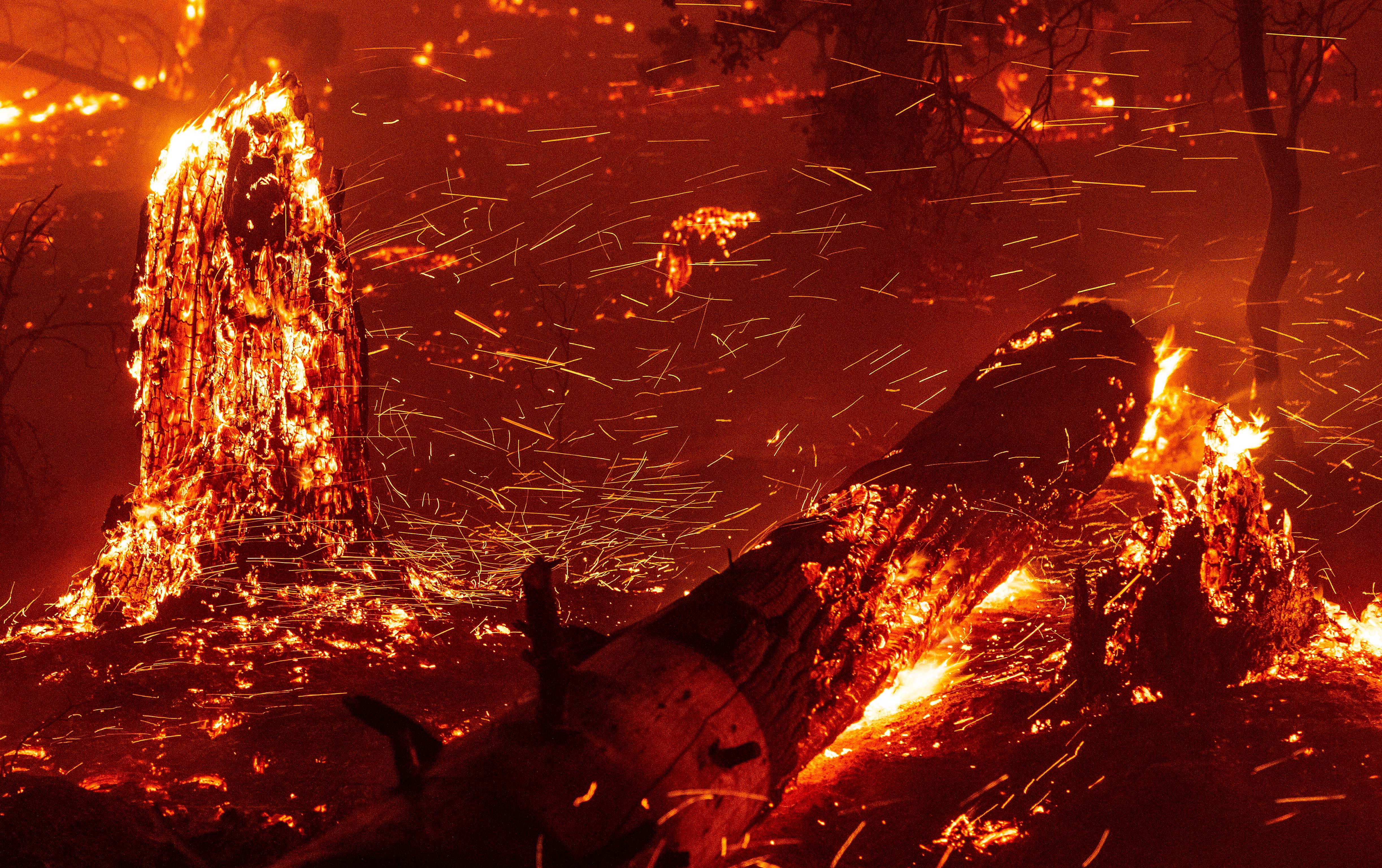 Embers fly off burning timber as flames push toward homes during the Creek Fire in the Cascadel Woods area of unincorporated Madera County, Calif., on Sept. 7. A brush fire encroaches along a road as a helicopter drops water during the Valley Fire in Jamul, Calif., on Sept. 6. The Valley Fire burned 4,000 acres that night with no containment and 10 structures destroyed, officials said. A.J. Garcia (left) looks on as his wife, Kendra Garcia (right), embraces her sister-in-law Tiffany Luvaas at the site of their former home that burned during the Colfax Fire on Monday, Sept. 7, in Colfax, Wash. “It started down the hill,” Luvaas said while tears escaped her eyes. “I woke up to it jumping the fence, and I barely had time.” 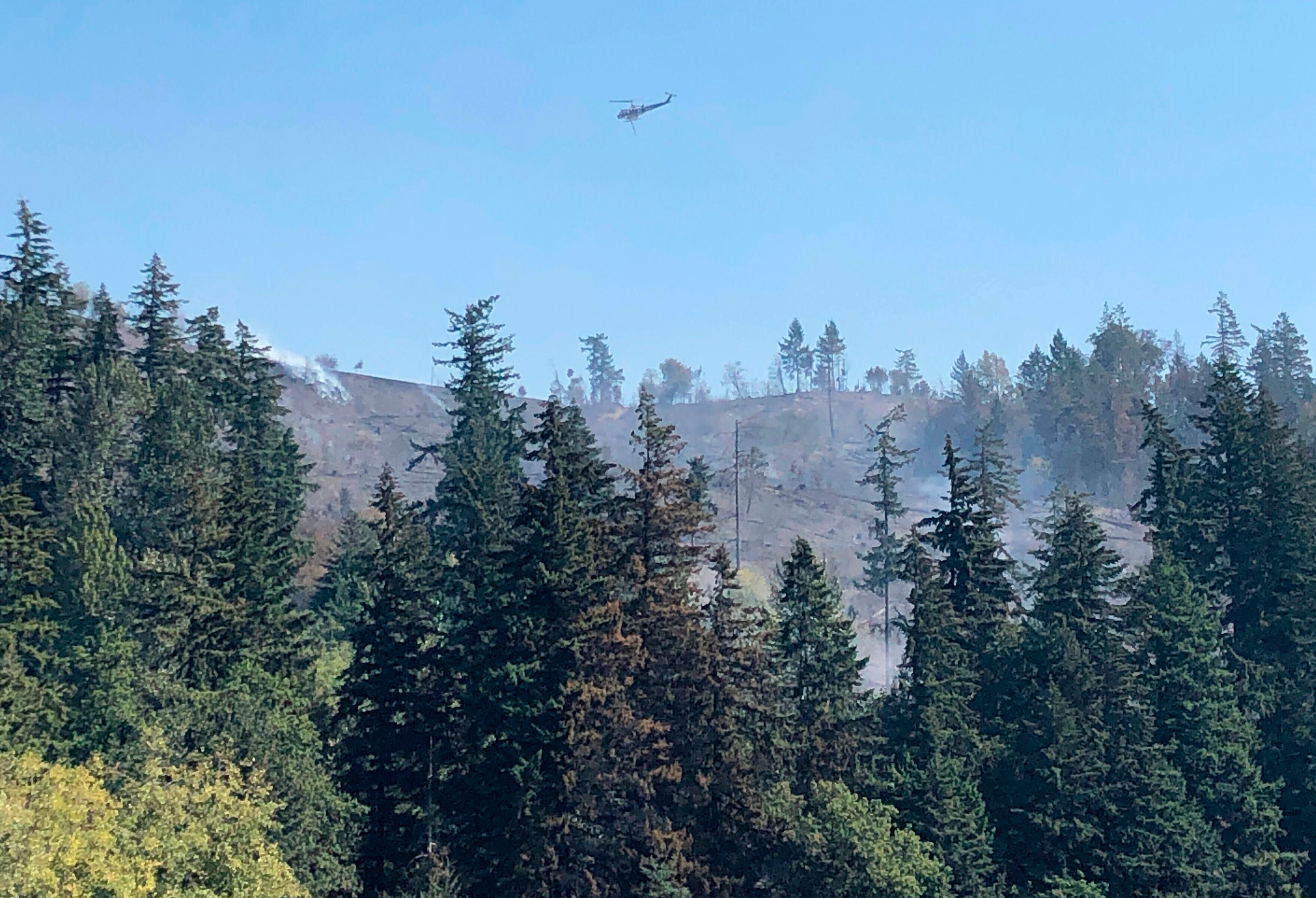 A helicopter flies over fires burning on a ridge in Sumner, Wash., on Wednesday, Sept. 9. Windblown wildfires raging across the Pacific Northwest destroyed hundreds of homes in Oregon, the governor said. 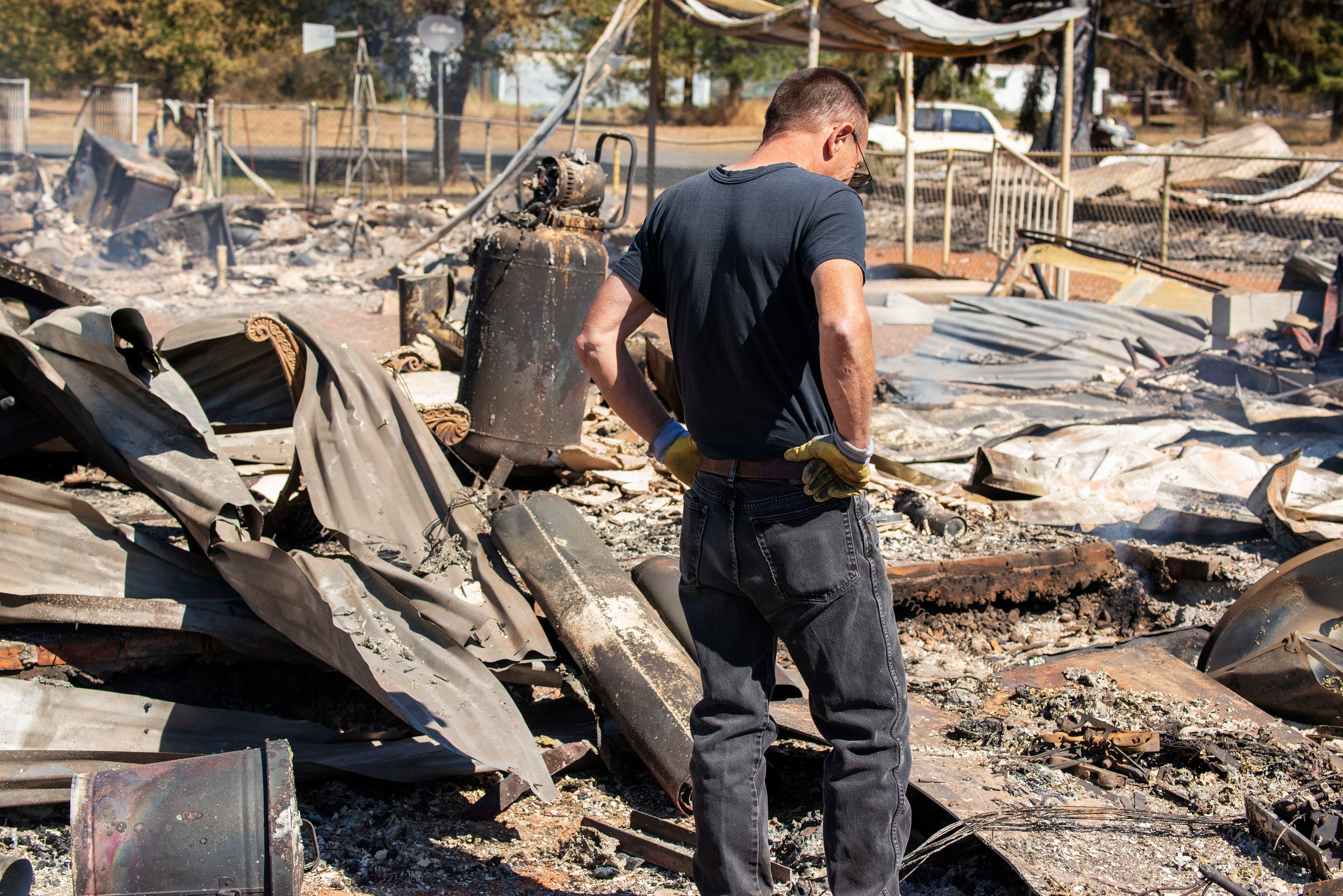 Jim Murray surveys his house which was destroyed by wildfire, Tuesday, Sept. 8, in Malden, Wash. “My wife and I planned to retire here but I’m not sure I am going to rebuild. I have a feeling this is going to be a ghost town now,” he said. Charred rubble remains after a wildfire decimated the small town of Malden, Wash., Monday, Sept. 7, destroying an estimated 70 percent of homes in the northern Whitman County community, The Spokesman-Review reports. 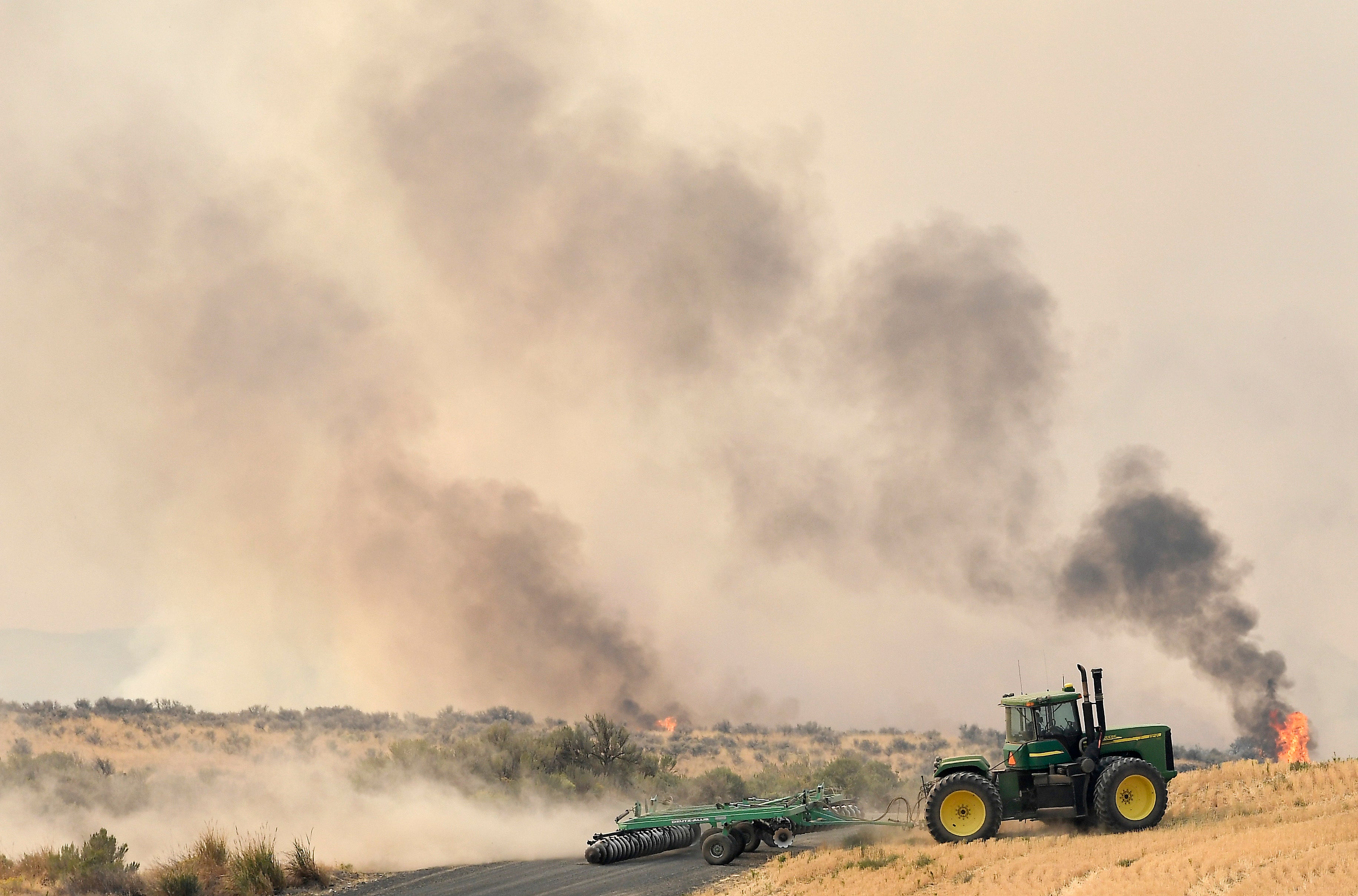 A tractor carves out an impromptu fire line as the Pearl Hill fire moves closer to Mansfield on Tuesday, Sept. 8, 2020, near Mansfield, Wash. An American flag waves in the the wind next to a pile of burning railroad ties in the wake of the Cold Springs Canyon Pearl Hill Fire on Monday, Sept. 7, in Okanogan, Wash. This photo taken in Salem, Ore., shows the smoke-darkened sky well before sunset at around 5 p.m., Tuesday, Sept. 8. Strong winds and high temperatures fueled catastrophic fires in many parts of Oregon, forcing thousands of people to flee from their homes and making for poor air quality throughout the West. 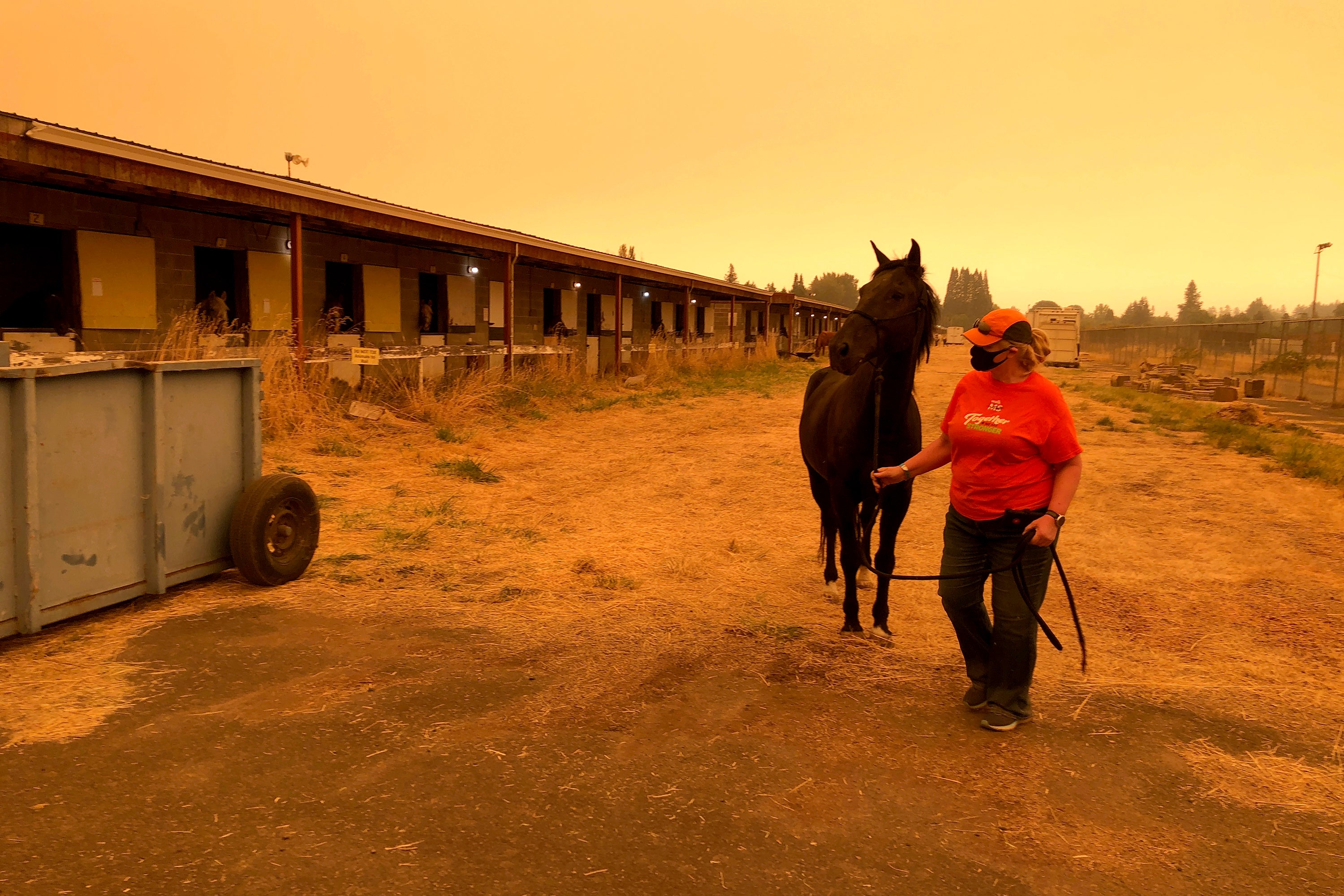 Catherine Shields, of Silverton, Ore., leads her horse Takoda under smoky skies, on the Oregon State Fairgrounds, Wednesday, Sept. 9, in Salem, Ore. Shields evacuated the horse and other animals from her home on Tuesday, as a wildfire threatened. Hundreds of horses have been brought to the fairgrounds in Salem by people fleeing the fires, along with llamas, goats, and other animals. 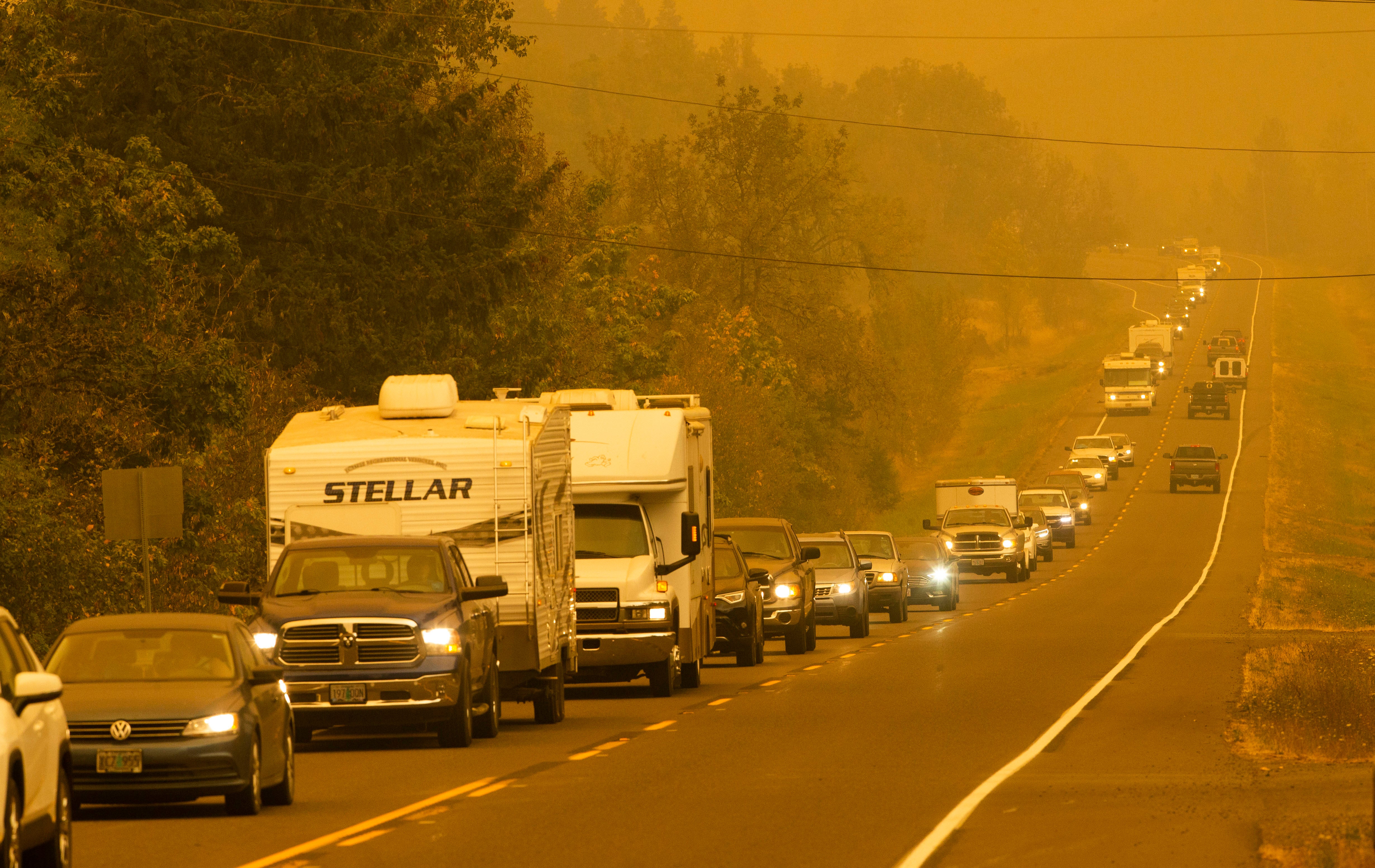 A steady stream of vehicles head west on a road east of Springfield, Ore., as residents evacuate the area ahead of a fast-moving wildfire on Tuesday, Sept. 8. 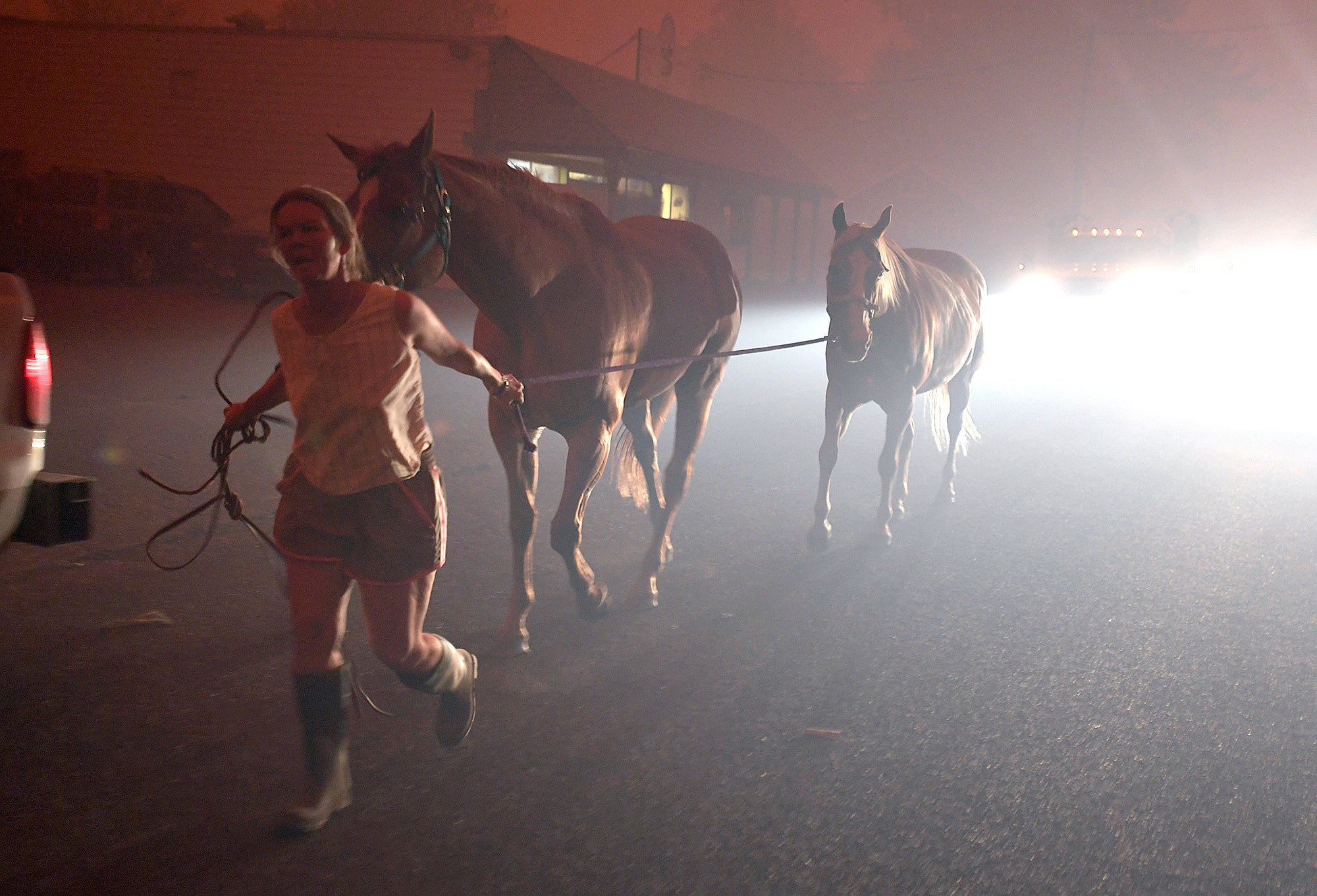 Jennifer Steckler walks two horses along state Highway 226 in Lyons, Ore., early Tuesday, Sept. 8. Steckler had walked them for more than two miles during evacuation from the Santiam Fire. The Eugene Hotel sign shines through a dense layer of smoke as seen from the top of Skinner Butte in Eugene, Ore., on Tuesday, Sept. 8, as smoke clogs the sky from wildfires burning in the state.