Officials dealing with catastrophic fires on the West Coast have had to counter social media rumors that the blazes were set by anti-fascist activists, publicly pleading that people verify information before sharing it.

Despite their efforts, misinformation about the origin of the fires — which have killed at least 15 people and consumed millions of acres — continues to spread on Facebook and Twitter.

Several law enforcement agencies in Oregon said they had been flooded with inquiries about rumors that activists were responsible. On Thursday, several journalists reporting on fires near the city of Molalla, Oregon, said they had been confronted by a group of armed people who were worried about unverified reports of arsonists in the area.

The rumors appear to have started Wednesday night, after the Portland Police Bureau warned people on Twitter about the risk of fire during demonstrations. But there is no evidence that activists have deliberately set fires.

“We’re not seeing any indications of a mass politically influenced arson campaign,” said Joy Krawczyk, a spokeswoman with the Oregon Department of Forestry.

Three law enforcement agencies in Oregon did announce on Thursday that the Almeda Fire, which incinerated neighborhoods and is linked to two deaths, may have been deliberately set. No suspects were publicly identified, but the Ashland police chief told The Oregonian that no information pointed toward the loose collective of anti-fascist activists known as antifa.

“One thing I can say is that the rumor it was set by Antifa is 100% false information,” Chief Tighe O’Meara told the newspaper in an email.

Officials in Washington state also reported one case they believed was arson, arresting a man they say was in a highway median setting a fire that was soon extinguished.

A firefighter puts out a hot spot along Highway 38 northwest of Forrest Falls, Calif., as the El Dorado Fire continues to burn Thursday afternoon, Sept. 10, 2020. The fire started by a device at a gender reveal party on Saturday.

Krawczyk said that many of Oregon’s fires remained under investigation. Officials have said that one of the most devastating fires, the Santiam Canyon blaze east of Salem, was ignited by falling trees that knocked down power lines.

The rumors about activist arsonists began to circulate Wednesday evening after the Portland police tweet about fire risks.

“Since fire danger is very high right now due to high winds and the current dry climate, fire will spread quickly and could affect many lives,” the police tweeted. “We ask you to demonstrate peacefully and without the use of fire.”

Right-wing groups, politicians and social media personalities saw the tweet as evidence that antifa, which has been a regular presence in Portland, must be responsible for the fires up and down the West Coast.

“Portland police ask BLM-Antifa to please STOP setting fires,” one tweet said, also referring to the Black Lives Matter movement. “Oregon is burning. Think one has anything to do with the other?”

Soon, at least half a dozen Facebook pages and groups started sharing the rumor in a cut-and-paste campaign. “A lot of these fires starting around Oregon are being purposely set by ANTIFA BLM,” the identical messages said. The posts were shared nearly 700 times.

The rumor surged when Paul Romero, a former Republican candidate for Senate, tweeted about unconfirmed reports of arson: “Oregon is on fire! Pallet Company in Oregon City confirmed Antifa arsonist on camera. Douglas County Sheriff has 6 ANTIFA arsonists in custody.”

The post was shared nearly 10,000 times on Twitter and was reposted to Facebook, where it reached up to 680,000 people, most of them members of groups and pages dedicated to the extremist far-right conspiracy QAnon.

It was also promoted in a misleading article published by Law Enforcement Today, which had more than 200,000 shares in pro-Trump and Blue Lives Matter groups on Facebook.

“Based on all the information that is coming in, official and unofficial, I firmly believe that this ongoing fire storm is man made and not a natural event,” Romero said in a text. “This is a criminal act and I can see that it is coordinated and intentional. Justice is coming.” 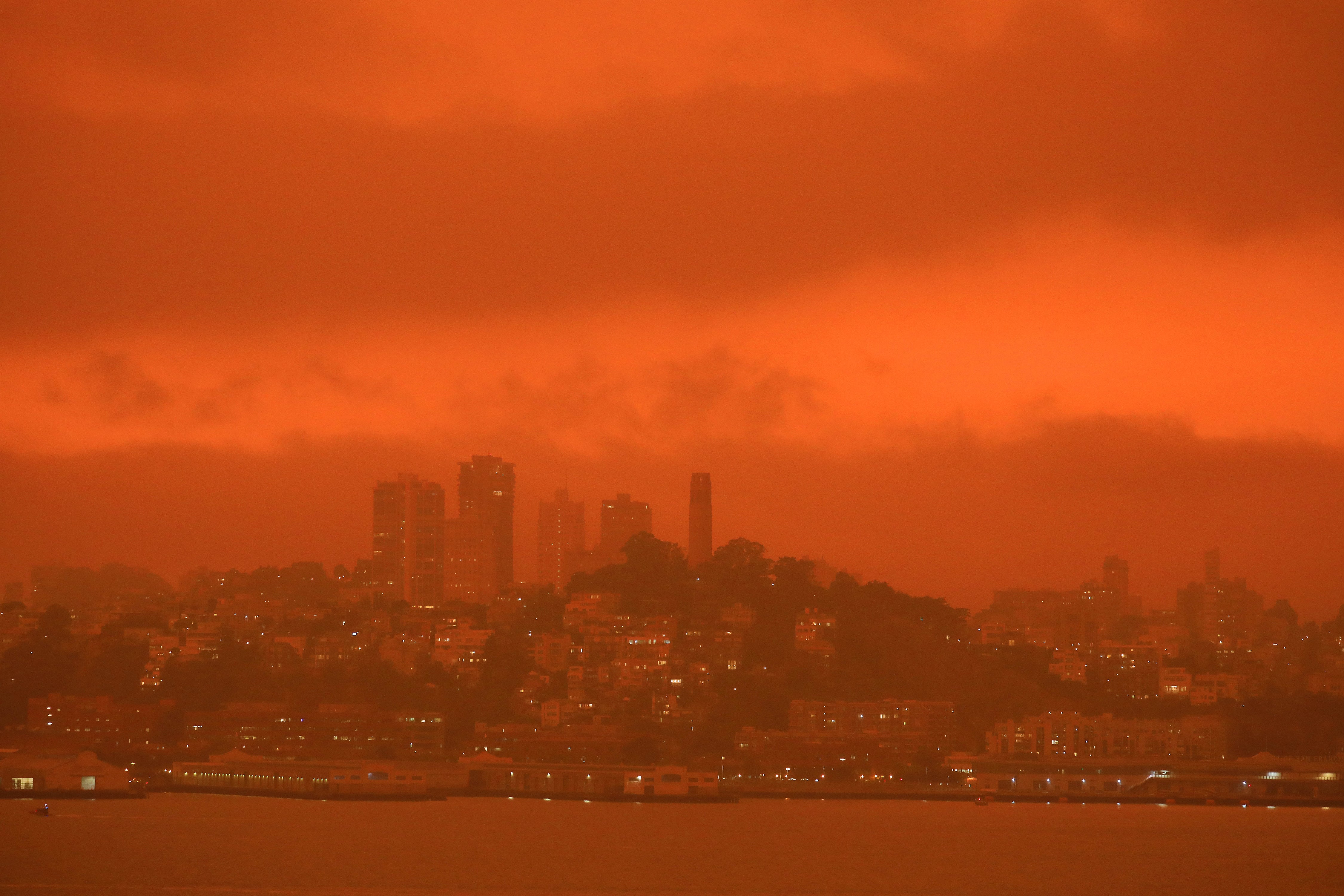 Heavy smoke form fires burning in the region brought a cloud of darkness to San Francisco skyline on Wednesday morning, Sept. 9, 2020, as seen from Treasure Island in San Francisco Bay.

“We have this convergence of conspiracy-minded communities that have sustained engagement online,” said Graham Brookie, director of the Atlantic Council’s Digital Forensic Research Lab. “We should expect that every news event or new crisis will be engaged on through that lens.”

“An everyday user on social media has a limited control on these major crises and is grasping for information,” Brookie said.

Many people also shared a post in which the Police Department in Molalla, south of Portland, asked residents to report suspicious activity. The department updated its Facebook post after it began to be shared as evidence of arson.

“This is about possible looters, not antifa or setting of fires,” the department wrote. “There has been NO antifa in town as of this posting at 02:00 a.m. Please, folks, stay calm and use common sense.”

In Medford, which was threatened by the Almeda Fire, the Police Department reported that it had heard rumors that officers had arrested either leftist antifa or right-wing Proud Boys activists on suspicion of arson. The department posted on Facebook that neither story was true, nor was a fake graphic associated with the rumors, nor were reports of “gatherings of Antifa.”

The Douglas County Sheriff’s Office said Thursday that 911 dispatchers were being overrun with requests for information about an untrue rumor that antifa members had been arrested in connection with fires. The office said the rumors were making a difficult situation even harder. “Do your part, STOP. SPREADING. RUMORS!” the office said in a Facebook post.

And in Jackson County, the Sheriff’s Department said that misinformation had become a problem.

“We are inundated with questions about things that are FAKE stories,” it posted on Facebook. “One example is a story circulating that varies about what group is involved as to setting fires and arrests being made. THIS IS NOT TRUE!”